By Matt Sedillo, from “City on the Second Floor)

Tomorrow doesn’t show up all at once

But when it does

Auction off the options

Smiling at your service to gig economy

Hire me as an adjunct

Fire me as contingent

Into a city I cannot afford to live in

Tell me my credit score

Better yet, tell me yours

Promise me the world, then show me the door

I am your velveteen rabbit

The drying paint of Saturn eating his children

Neoliberalism feasting on the marrow

Of the past and the present, the jobs of tomorrow, gone today

Born sometime after the foreclosure

Tell me another for the fire

Tell me the one

Where I killed the economy

Matt Sedillo has been described as the “best political poet in America” as well as “the poet laureate of the struggle” by academics, poets, and journalists alike. Sedillo was the recipient of the 2017 Joe Hill Labor Poetry award, a panelist at the 2020 book festival, and a participant in the 2011 San Francisco International Poetry Festival. Sedillo has appeared on CSPAN and has been featured in the Los Angeles Times, among other publications. He has spoken at Casa de las Americas in Havana, Cuba, at numerous conferences and forums such as the National Conference on Race & Ethnicity in American Higher Education, National Association of Chicana/Chicano Studies, The Left Forum, The US Social Forum, and at over a hundred universities and colleges, including the University of Cambridge, among many others. Matt Sedillo is the current writer in residence at Re/Arte and author of Mowing Leaves of Grass [reviewed in Change Links] (FlowerSong Press, 2019) and City on the Second Floor (FlowerSong Press, 2022) [see review in this issue]. See more at https://mattsedillo.com

City on the Second Floor by Matt Sedillo

Like “Mowing Leaves of Grass,” an earlier book of poems by Matt Sedillo, this volume of poems include history lessons, ethical and moral challenges to complacency and complicity, and unflinching examination of the horrors of late capitalism. He is also totally and unerringly in touch with the physical, social and political terrain of Los Angeles and its form of apartheid.

One example of his ability to teach contemporary and historical lessons is his throwaway reference to Lucky Baldwin. Sedillo lived in Baldwin Park. I live at the foot of the Baldwin Hills, where L.A. is still pumping oil out of the Inglewood Field, one of the richest sources of petroleum around – you can see the praying mantis oil wells dipping and pumping as you drive south on La Cienega Boulevard past Kenny Hahn Park. I never thought to wonder who the Baldwin was that they are named after. But Sedillo did, and found out about the biggest landowner (land thief and settler colonizer) in Anglo California, who owned the whole thing as one of his “ranchos” (a term stolen, like the land, from Mexico).

Let us instead consider

Born in the final year of

Jacksonian Democracy with all its promise of land theft

When asked for a defining legacy

And that was Lucky

A tradition to which my labor

And a practice to which my employers

Both prior and current

Not only to be among the grandest of enthusiasts

But also, the most ardent of practitioners

So, who exactly is Lucky Baldwin? Here’s a description from a KCET episode:

Throughout the previous decade, he had cashed in on more than 5 million dollars worth of stock in silver and gold; he’d built the 3-million-dollar Baldwin Hotel in San Francisco; and turned Rancho Santa Anita into a tremendously productive operation, replete with thoroughbred race studs and miles of orchards and vineyards. Through it all, his penchant for business and love affairs kept his name in the papers for years to come, transfixing Americans with tales of immorality.

More than a century after his death, his name still echoes throughout the Southland: Baldwin Park, Baldwin Lake, Baldwin Avenue, and the Baldwin Hills. 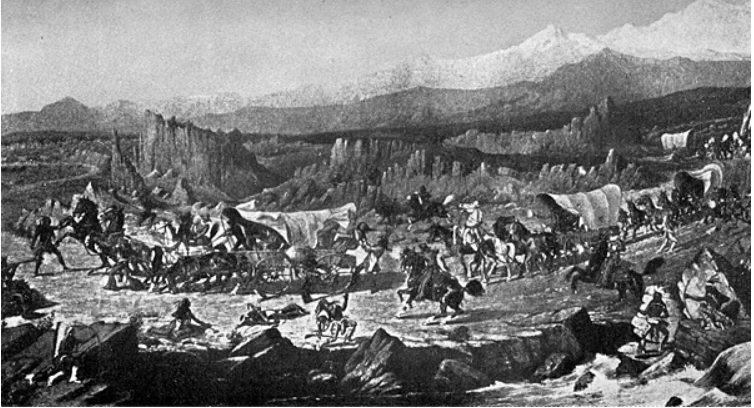 Indian attack on the Baldwin Party near Salt Lake City in 1853, as pictured by the artist Cross, from Lucky Baldwin’s description. Image taken from C.B. Glasscock’s 1933 biography ”Lucky Baldwin: The Story of an Unconventional Success’

“Laying claim to” is a euphemism for stealing. 40,000 acres is about 64 square miles; that is, a plot of land eight miles wide and eight miles long, about the distance from say, La Cienega Boulevard to the Santa Monica pier east to west, and from the Beverly Center to Manchester Boulevard, north to south.

Betcha didn’t know that. I didn’t until I learned about Lucky Baldwin from Matt Sedillo’s poetry.

You can see some of Matt’s poetry in the Poetry corner this issue, and it’s best in this review to give a little more of the actual flavor. Here’s an excerpt from Party Hymn:

And I have seen

Then spit back a peer reviewed

And I have seen

The organizers of labor

And I have seen age old cowardice

And I have seen courage

And I have seen fear in the pig’s eye

And I have seen rebellions

Then fade to smoke

There is a great variety of material, agitational, personal, ideological, and fantastical.  Some of the poems and a long teleplay script are forms of speculative fiction about possible futures and about how political contradictions might play out between tendencies in an on-going revolutionary process.

Sedillo evokes or invokes Shakespeare, T.S. Elliot, William E. Henley’s Invictus, Langston Hughes, Allen Ginsburg, and he speaks through various characters he creates, rich and poor, with humility or hubris as befits the character. But his own voice is unique, Chicano Mexicano proletarian and prophetic, and you can almost hear it ripping through your ears as you read. His words burn vivid images in your mind as they slash, flash and splash across the page. They compel you to think, to feel, to care, and above all, to act, to fight for a better world.

In an era when “fake news” is virtually a trademark of Trumpians and neo-liberal globalists alike, when journalism and social media are corrupt and controlled by the CIA, the FSB and other organs of state and private corporatized surveillance and propaganda, it is poetry and poets like Sedillo who have taken on the task of “afflicting the comfortable and comforting the afflicted.” But Sedillo doesn’t stop there; he seeks to open the eyes, pierce the heart, and goad the soul of the afflicted into a recognition of their own power to create and recreate the world.

Sedillo is unembarrassed in acknowledging his efforts to become a successful and self-sustaining public intellectual through his poetry, as an educator without portfolio, hosted on campuses, broadcasts and podcasts, building a following on Facebook for his social and cultural criticism and interviews. But all this is in service of laying the ground for an uncompromising, revolutionary movement for workers’ power and a struggle for socialism and self-determination. Sedillo understands that knowledge is power, that words have power, and that IRL, the bosses and colonizers, white nationalists and imperialists need and depend on the confined and constrained creative powers of the oppressed and exploited as the true source of their own oppressive and exploitive power and wealth.

Sedillo’s latest work, as published in City on the Second Floor, demonstrates that his rhetorical, lyrical and creative powers are growing. Buy it, read it, and let it arm your spirit, armor your resistance, and fortify your capacity to struggle with him, against blood-suckers and brain-eaters, for a better world.

Sedillo basically summed up the impact and purpose of his latest book in the poem Camelot:

“This is a Molotov

If you enjoyed this post, please consider leaving a comment or subscribing to the RSS feed to have future articles delivered to your feed reader.
By Change-Links|2022-03-29T23:05:46-05:00March 29th, 2022|Anti-Racism/Racism, Arts, Chican@-Mexican@-Latinx, Justice/Injustice, Labor, Matt Sedillo, Michael Novick, Poetry Corner|0 Comments