Lift Every Voice and Sing

Lift every voice and sing

Till earth and heaven ring,

Ring with the harmonies of Liberty;

High as the listening skies,

Let it resound loud as the rolling sea.

Sing a song full of the faith that the dark past has taught us,

Sing a song full of the hope that the present has brought us.

Facing the rising sun of our new day begun,

Let us march on till victory is won. 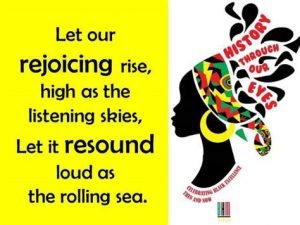 Stony the road we trod,

Felt in the days when hope unborn had died;

Yet with a steady beat,

Have not our weary feet

Come to the place for which our fathers sighed?

We have come over a way that with tears has been watered,

We have come, treading our path through the blood of the slaughtered,

Out from the gloomy past,

Till now we stand at last

Where the white gleam of our bright star is cast. 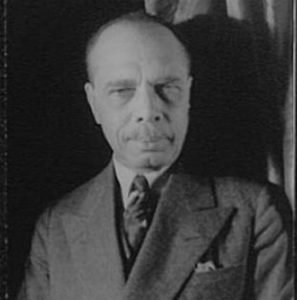 James Weldon Johnson, born in Florida in 1871, was a national organizer for the NAACP and an author of poetry and nonfiction. Perhaps best known for the song “Lift Every Voice and SIng,” he also wrote several poetry collections and novels, often exploring racial identity and the African American folk tradition. He described his writing of the lyrics to “Lift Every Voice and Sing.”

“A group of young men in Jacksonville, Florida, arranged to celebrate Lincoln’s birthday in 1900. My brother, J. Rosamond Johnson, and I decided to write a song to be sung at the exercises. I wrote the words and he wrote the music. Our New York publisher, Edward B. Marks, made mimeographed copies for us, and the song was taught to and sung by a chorus of five hundred [Black] school children.

“Shortly afterwards my brother and I moved away from Jacksonville to New York, and the song passed out of our minds. But the school children of Jacksonville kept singing it; they went off to other schools and sang it; they became teachers and taught it to other children. Within twenty years it was being sung over the South and in some other parts of the country. Today the song, popularly known as the Negro National Hymn, is quite generally used.

“The lines of this song repay me in an elation, almost of exquisite anguish, whenever I hear them sung by [Black] children.” The song was published in 1925 in The New Negro by Alain Locke, a collection of poetry, fiction, essays, and drama of the so-called Harlem Renaissance, which is now in the public domain.

If you enjoyed this post, please consider leaving a comment or subscribing to the RSS feed to have future articles delivered to your feed reader.
By Change-Links|2022-01-01T01:27:19-05:00January 1st, 2022|Anti-Racism/Racism, Historical, Movements, Poetry Corner|0 Comments