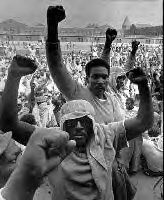 A Hunger Strike for Humanity

3. Comply with the recommendations of the US Commission on Safety and Abuse in Prisons (2006) regarding an end to longterm solitary confinement.

These five statements are the demands of prisoners in Pelican Bay State Prison in California currently refusing food and (in some instances) drink.  The hunger strikers have been joined by up to 6600 other prisoners in the California prison system who have fasted for one or more days in solidarity. Some of the striking prisoners involved are facing imminent renal failure.  In other words, their kidneys are about to fail.  Now, I don’t know if the reader has ever seen an animal who has experienced renal failure, but it is not a pretty sight and usually leads to certain death.  I found this out a couple years ago when my cat died in exactly this way.  The fact that some of the hunger strikers are this near death is but one of the most recent examples of the nature of criminal confinement in the United States.  Furthermore, it proves once again the callousness of those officials whose careers depend on putting people in prison in the first place.  After all, one simple statement from these officials acceding to these demands could end the hunger strike.

The demands are not radical.  These prisoners know that they are in a maximum security prison because they did very bad things.  They are merely asking for fair and humane treatment.  Prisoners in the so-called Secure Housing Units (SHUs) in Pelican Bay and other supermax prisons in California are kept in windowless 6x 10 foot cells twenty-three and a half hours a day.  Some of these prisoners have been kept in these cells for over thirty years.  As noted in demand number three, the US Commission on Safety and Abuse in Prisons recommended the use of longterm solitary confinement as a last resort and called for the end of longterm isolation.  Yet, over 3500 prisoners remain in these cells in California prisons with hundreds more in line to be placed in one when a unit “opens up.”

The strike is being considered by numerous prisoner rights groups and other groups who work with prisoners and their families as one of the most significant prisoner actions since the 1971 takeover of Attica prison in New York.  One of the primary reasons for this comparison is, like the prisoner rebellion in Attica, the prisoners involved in the California action cross lines of race and ethnicity–a rarity in today’s prisons where ethnicity, race and neighborhood ties are exploited by guards and certain prisoners precisely to prevent any type of solidarity.  This aspect of prison life is addressed in the first demand above.  Currently, when an individual prisoner breaks a rule, the prison often punishes a whole group of prisoners of the same race or ethnicity. The prisoners are asking that this practice stop and that those individuals that commit the infraction be the only ones punished.

The second demand involves the system within the California prison system whereby inmates are accused of being members of a “gang.”  This “gang” could be a genuine criminal organization or a radical political group.  It doesn’t even matter whether the prisoner ever joined a “gang” or any organization the authorities label a “gang.”  However, once inmates have this label attached to their record, they are sent to a SHU where they can spend years in isolation unless they “debrief” (snitch).   Prisoners unable to take the isolation units will either provide real information on a gang member or, if they are not gang members or unwilling to provide real information, they will make up stories to get out of isolation.  This process ensures a never-ending supply of prisoners for the SHUs.

The fourth demand is self-evident.  Besides the non-nutritious nature of prison food, prisoners report being fed meals that do not even fulfill regulations set by the California Board of Prisons.

Finally, the fifth demand is in response to the continued failure of prison authorities at Pelican Bay to provide, among other things, warm clothing and a weekly phone call.  These privileges and others denied by California officials are routinely provided at supermax prisons in other states and in the federal prison system.  Another aspect to this demand goes straight to the trend over the past three decades to move the focus of prisons from rehabilitation to punishment and punishment only.  SHU inmates in California prisons are not allowed to “to engage in self-help treatment, education, religious and other productive activities….”  This demand asks that they be provided such opportunities.

As noted before, these are not radical demands.  Yet, in a nation where torture has become a topic no one discusses in polite company and school budgets are cut while prison budgets aren’t, the fact that men are starving themselves to death in order that their fellow prisoners may someday be treated like humans does not surprise.  In fact, it barely makes the news.

Ron Jacobs is the author of The Way the Wind Blew: a History of the Weather Underground and Short Order Frame Up. Jacobs’ essay on Big Bill Broonzy is featured in CounterPunch’s collection on music, art and sex, Serpents in the Garden. His collection of essays and other musings titled Tripping Through the American Night is now available in print and his new novel is The Co-Conspirator’s Tale. He can be reached at: rjacobs3625@charter.net

If you enjoyed this post, please consider leaving a comment or subscribing to the RSS feed to have future articles delivered to your feed reader.
By John Johnson|2011-08-01T14:14:11-05:00August 1st, 2011|Commentary, Democracy, Events, Featured, Human Rights|0 Comments