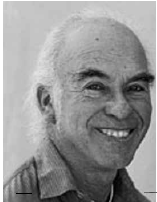 In Memory of Israel Feuer, who worked on Change-Links and KPFK and passed away recently, we are printing his statement when he ran for the Local Station Board at KPFK  some years ago. He had been intending to write a piece for Change Links about KPFK, but did not complete it, so we are running this instead.

By Israel Feuer
As one of the original volunteer workers for KPFK in the late 1950’s, I have actively participated in its public outreach efforts, news & public affairs programming, Listener Advisory Board activities, etc. As a concerned listener I count myself as one of KPFK’s staunchest supporters & severest critics!
KPFK is a radio station, not a political party, religious cult, business enterprise, or private club. Pacifica is an educational foundation, non-profit, non-commercial, non-partisan & nonsectarian. And that’s what they should remain!
I very strongly believe in the Pacifica Mission Statement but, despite Pacifica’s many pioneering achievements, the potential inherent in its mandated educational guidelines has not been realized. It is urgent that we all learn something from the lessons of our tumultuous and strife-ridden past and change the self-destructive, wasteful, dysfunctional ways that have been so costly, in every sense, to all of KPFK & Pacifica!
In our programming, no subject/issue/viewpoint need be taboo, given the appropriate format, moderation, presentation, etc., and the proper exercise of judgment, balance, sensitivity, etc. Let’s not muck up this opportunity! The new Pacifica By-laws& Local Station Board offer a once-in-a-lifetime chance to re-think & re-new as well as re-structure. Both in programming and organizational affairs, I advocate dialogue not diatribe, debate not debasement! I believe in fair play, mediation, conflict resolution, democratic-management experimentation, ombudsman (ombudsperson?) facilitation, etc.
I have been a lifelong activist across a wide range of good causes, such as pro-peace & anti-war, civil liberties & civil rights, alternative politics & ecological action. I was a conscientious objector during the Korean War & served prison time for my draft refusal. I was one of the initial organizers who revived CORE in the L.A. area in the mid-fifties. I was a principal organizer in Oregon in 1952 to draft U.S. Supreme Court Justice William O. Douglas for President. Prior to that, I attended the national founding convention of the Progressive Party in 1948 in Philadelphia & was active in the Henry Wallace campaign for President. As the Peace & Freedom Party 1970 candidate for California Secretary of State, I was the first person, to my
knowledge, campaigning on ecological principles, presaging the later emergence of Green politics. I was the founding coordinator of Ecology Action in Southern California in 1968, one of the first manifestations of
the then-nascent environmental/ecological movement later emerging in Earth Day, etc. All this & more; enough to keep me busy, poor & in harm’s way!
I believe my experience, independence, commitment, creativity, ability & energy, qualify me to make a meaningful contribution as a member of this new KPFK LSB during this experimental restructuring of Pacifica. As a longtime advocate of at least a partially-elected board, I feel obligated to myself as well as to other KPFK listeners to give this new opening a fair try. I solicit your vote and, of course, I’m always open to your questions, comments,& suggestions.

If you enjoyed this post, please consider leaving a comment or subscribing to the RSS feed to have future articles delivered to your feed reader.
By Change-Links|2016-04-05T20:04:23-05:00April 5th, 2016|In Memoriam|0 Comments