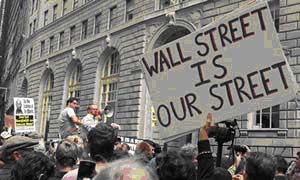 The young people protesting in Wall Street and beyond reject this vain economic order. They have come to reclaim the future.

Why are people occupying Wall Street? Why has the occupation – despite the latest police crackdown – sent out sparks across America, within days, inspiring hundreds of people to send pizzas, money, equipment and, now, to start their own movements called OccupyChicago, OccupyFlorida, in OccupyDenver or OccupyLA?

People protest during the ‘Occupy Wall Street’ rally in New York, 17 September. (Photo: Steven Greaves/Demotix/Corbis)There are obvious reasons. We are watching the beginnings of the defiant self-assertion of a new generation of Americans, a generation who are looking forward to finishing their education with no jobs, no future, but still saddled with enormous and unforgivable debt. Most, I found, were of working-class or otherwise modest backgrounds, kids who did exactly what they were told they should: studied, got into college, and are now not just being punished for it, but humiliated – faced with a life of being treated as deadbeats, moral reprobates.

Is it really surprising they would like to have a word with the financial magnates who stole their future?

Just as in Europe, we are seeing the results of colossal social failure. The occupiers are the very sort of people, brimming with ideas, whose energies a healthy society would be marshaling to improve life for everyone. Instead, they are using it to envision ways to bring the whole system down.

But the ultimate failure here is of imagination. What we are witnessing can also be seen as a demand to finally have a conversation we were all supposed to have back in 2008. There was a moment, after the near-collapse of the world’s financial architecture, when anything seemed possible.

Everything we’d been told for the last decade turned out to be a lie. Markets did not run themselves; creators of financial instruments were not infallible geniuses; and debts did not really need to be repaid – in fact, money itself was revealed to be a political instrument, trillions of dollars of which could be whisked in or out of existence overnight if governments or central banks required it. Even the Economist was running headlines like “Capitalism: Was it a Good Idea?”

It seemed the time had come to rethink everything: the very nature of markets, money, debt; to ask what an “economy” is actually for. This lasted perhaps two weeks. Then, in one of the most colossal failures of nerve in history, we all collectively clapped our hands over our ears and tried to put things back as close as possible to the way they’d been before.

Perhaps, it’s not surprising. It’s becoming increasingly obvious that the real priority of those running the world for the last few decades has not been creating a viable form of capitalism, but rather, convincing us all that the current form of capitalism is the only conceivable economic system, so its flaws are irrelevant. As a result, we’re all sitting around dumbfounded as the whole apparatus falls apart.

What we’ve learned now is that the economic crisis of the 1970s never really went away. It was fobbed off by cheap credit at home and massive plunder abroad – the latter, in the name of the “third world debt crisis”. But the global south fought back. The “alter-globalization movement”, was in the end, successful: the IMF has been driven out of East Asia and Latin America, just as it is now being driven from the Middle East. As a result, the debt crisis has come home to Europe and North America, replete with the exact same approach: declare a financial crisis, appoint supposedly neutral technocrats to manage it, and then engage in an orgy of plunder in the name of “austerity”.

The form of resistance that has emerged looks remarkably similar to the old global justice movement, too: we see the rejection of old-fashioned party politics, the same embrace of radical diversity, the same emphasis on inventing new forms of democracy from below. What’s different is largely the target: where in 2000, it was directed at the power of unprecedented new planetary bureaucracies (the WTO, IMF, World Bank, NAFTA), institutions with no democratic accountability, which existed only to serve the interests of transnational capital; now, it is at the entire political classes of countries like Greece, Spain and, now, the US – for exactly the same reason. This is why protesters are often hesitant even to issue formal demands, since that might imply recognizing the legitimacy of the politicians against whom they are ranged.

When the history is finally written, though, it’s likely all of this tumult – beginning with the Arab Spring – will be remembered as the opening salvo in a wave of negotiations over the dissolution of the American Empire. Thirty years of relentless prioritizing of propaganda over substance, and snuffing out anything that might look like a political basis for opposition, might make the prospects for the young protesters look bleak; and it’s clear that the rich are determined to seize as large a share of the spoils as remain, tossing a whole generation of young people to the wolves in order to do so. But history is not on their side.

We might do well to consider the collapse of the European colonial empires. It certainly did not lead to the rich successfully grabbing all the cookies, but to the creation of the modern welfare state. We don’t know precisely what will come out of this round. But if the occupiers finally manage to break the 30-year stranglehold that has been placed on the human imagination, as in those first weeks after September 2008, everything will once again be on the table – and the occupiers of Wall Street and other cities around the US will have done us the greatest favor anyone possibly can.

If you enjoyed this post, please consider leaving a comment or subscribing to the RSS feed to have future articles delivered to your feed reader.
By John Johnson|2011-10-01T22:30:21-05:00October 1st, 2011|Banking Reform, Big Business, Commentary, Economy, Events, Featured, Wall Street|0 Comments