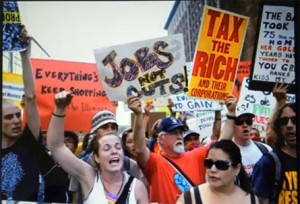 Over 1,000 protestors defied a 12:01 am deadline Monday, November 28 by refusing to leave the Occupy LA encampment at City Hall in a night-long stand off with police.  The Occupy movement, begun in Los Angles on October 1, vows to continue.  One leaflet urged people to “Occupy the Ports” on Monday, December 12 at 5:00 am at Harry Bridges Park in Long Beach.

The first occupation began on Wall Street September 17, 2011 to protest the greed and power of the super-rich and their banks.  The protest has spread nationwide.  The two most important accomplishments of the Occupy movement to date is to (1) change our nation’s discourse from talk of debt and cuts, to how to raise funds and reorder our priorities, and (2) to begin to create a new society by changing the character of relationships from dominance and submission to cooperation and liberation.

From Pittsburgh to Pasadena, 1,769 Occupy sites sprang up in cities and towns in every state.  The Occupy movement said there is tons of money in the coffers of the corporate elite, and a fair tax structure would mandate that the very wealthy and their corporations pay their fair share.  That would fund basic services, jobs, homes, education, and health care.  Occupy also advocates ending the Mid-east wars, breaking the big money/politician connection, and building a more equal society.

Is all this possible?  Consider the following.  After WWII, corporations paid over 40% of all federal taxes.  Today, corporations pay less than 10%, and even lower in most states.  There is no way the rest of us, the 99%, can make up the difference.

Average pay for US wage and salary workers is about $40,000 a year, less when adjusted for inflation.  Top executives of the largest 299 corporations averaged $11.4 million in income in 2010, according to the AFL-CIO.  The union federation supports the occupy movement.  According to Moody’s, the financial analyst, 1,600 US-based corporations were holding $1.2 trillion in cash at the end of 2010, and many reported record profits.

Here are some ideas to help fulfill a big part of the Occupy wish list, and help the congressional deficit-cutting committee.

Close tax loopholes for the very wealthy and their corporations and banks, and increase their tax rates.  Then, end their offshore tax havens, and assess a tax on all financial transactions.  These measures would raise hundreds of billions of dollars.

This year, 42 states, including California, had a combined deficit of $105 billion.  The devastating wars in Iraq, Afghanistan, and Pakistan for 2011 cost $159 billion.  Bring all our troops and military contractors home and the savings could fund every state deficit, and restore cut programs and re-employ hundreds of thousands of terminated workers.

Jobs are the public’s number one concern since the 2007-08 recession.  Yet, the private sector hasn’t reduced unemployment one iota while 20 million people want to work.  Let’s re-establish an expanded Works Progress Administration, begun by President Roosevelt in 1935, which gave 8 million people jobs.

Finally, rather than cut Social Security, Medicare and Medicaid, lifelines for millions, lets broaden Medicare to cover everyone.  That would stop the health insurance industry from stuffing billions of our health premium dollars into their bank accounts, and save our health care system $400 billion a year just on administrative costs.

Paul Krehbiel, a Pasadena resident and participant in the Occupy Wall Street movement, is author of Shades of Justice, a book about the society-changing social justice movements of the 1960’s.  He can be reached at paulkrehbiel@earthlink.net.