[Ed. note: As Change Links went to press, the Trump administration was still failing to comply with a court order to reunite children it had separated from their immigrant and refugee parents.]

by Brenden Gallagher [Excerpts from httpss://www.dailydot.com/irl/occupy-ice-los-angeles/]

The protesters at L.A.’s ICE offices don’t expect their occupation to be easy, and they don’t expect the encampment to last forever. The core group is largely comprised of veterans of other movements: ICE Out of LA, the California Immigrant Youth Justice Alliance, Black Lives Matter, Ground Game LA, Democratic Socialists of America, About Face, National Day Laborers Organizing Network (NDLON), and People Organized for Westside Renewal (POWER). Several spent months at the Dakota Access Pipeline at Standing Rock. They stood alongside the water protectors, building structures and providing security for elders. To them, this protest is an extension of that movement: a fight against what they see as a US imperialist legacy of separating Black and Brown children from their families and communities. 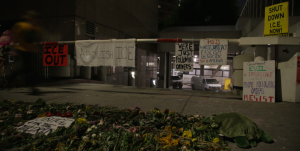 Yohualli, who also has long brown hair but sports a beard to match, says he never thought they could stop the Dakota Access Pipeline from being completed—“We were building something bigger than ourselves”—and he isn’t idealistic enough to believe that this action will lead to the immediate abolition of ICE, either. “This is a movement,” he said. “And there will be other struggles.”

Carter Moon, an activist with Ground Game LA, says the protestors have learned a lot from some of the more experienced activists. “A lot of the people who have been most directly involved here were actively involved in Occupy Wall Street and Standing Rock,” he said. “They know how to keep the camp feeling open and democratic and in control for anyone who wants to participate.” 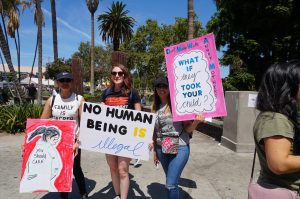 To get more people involved, the group held a larger civil disobedience action on July 2, in which activists blocked the entrances and driveways at the ICE facility, fully aware they were risking arrest. In the end, 18 protestors were arrested. “We had a lot of support from different communities,” John Motter, a veterans and homeless rights activist, told the Daily Dot, rattling off appearances by faith leaders, indigenous people, and City Councilmember Mike Bonin, who represents nearly 300,000 people in his district. “And all willing to put it on the line and stand up for undocumented people.”

Brenden Gallagher has worked with some of the activists interviewed in an organizing capacity before around other political issues in Los Angeles. He is not, however, a member of ICE Out of LA or Boycott ICE LA. He’s a politics reporter and cultural commentator. His work has been in Motherboard, Complex, and VH1. He’s the co-founder of Beer Money Films, an indie production company. Based in LA, he works in television drama as a writers assistant.