by Caitlin MacLaren and Zoltán Glück 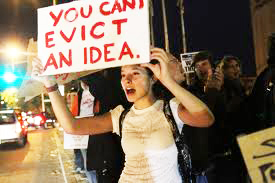 The whole world seems to be waiting eagerly for the “next phase” of Occupy Wall Street, or else for the entire thing to dissipate overnight. While the raids on occupations from Oakland to New York certainly change the equation, they do little to subtract from our numbers. In fact, they multiply the reasons why we fight.

Even before the raid on Liberty Square, much of the work of Occupy Wall Street was being done in public atriums, in schools, in community centers, in workplaces and online — a level of organization that has been largely ignored by the mainstream news media.

In this way, Occupy Wall Street has challenged us to express our views and organize politically outside officially sanctioned forums. It has given people a means to engage directly in decision-making in a way that our broken political system has long failed to deliver.

Pundits who argue for channeling Occupy Wall Street into party politics miss the point entirely. By focusing America’s attention on the dramatic polarization of wealth and by creating a new political identity — “the 99%” — we are already impacting politics in ways the Tea Party could only dream of.

The power of our movement is that it is changing the very coordinates of how people think about politics; it is changing the political imagination. We therefore cannot accept the mandate to return to the way things were, to use get-out-the-vote drives and political action committees as our only means of making change.

This week, students from universities across New York City have joined together for Week of Action and have planned a student strike today. Thousands will march in solidarity with Occupy Wall Street.

Caitlin MacLaren, a 20-year-old sophomore at New York University, is an organizer with the New York City Student Assembly, a group affiliated with the Occupy Wall Street movement.

Zoltán Glück, 26, a graduate student at the City University of New York, is an organizer with the New York City Student Assembly, a group affiliated with the Occupy Wall Street movement.