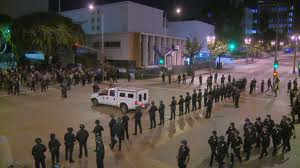 The Empire Strikes Back

Congress shall make no law respecting an establishment of religion, or prohibiting the free exercise thereof; or abridging the freedom of speech, or of the press; or the right of the people peaceably to assemble, and to petition the government for a redress of grievances.*

*But Only During Business Hours and When Your Not Inconviencing Or Embarrassing Local Governmental Officials, Homeland Security or Their Corporate Benefactors.

The massive police attack on the Occupy LA rally on November 29, on the grounds of LA City Hall was a criminal act.  First the order all news vans to be blocks away.  Only individual reporter could be within police lines.  No alternative media would be protected. Over 300 were arrested, only a faction had agreed to be arrested and the rest must have been rounded up as they were leaving the area.  The cops obviously lied to them as they told people if they didn’t want to be arrested they would leave the City Hall grounds.   Their bail was set at $5000  for suspicion of walking on the grass?  Mostly for punishment and to keep them from bailing out and rejoining the rally.

Many people were handcuffed, by those plastic ties, and made to sit on cold concrete for hours.   Others were handcuffed in buses for hours and told they would have to pee in their pants.

People were arrested blocks away and some people who had nothing to do with the protest were also arrested  and roughed up.  Bilal Ali, Co-founder of Occupy the ‘Hood, beaten and detained. Bilal and Joseph Thomas were kettled away from a larger group of Occupy supporters near Pershing Square sometime between 2:30 and 3:00 a.m. and were beaten repeatedly by LAPD officers with battons. Bilal appeared to be injured, perhaps seriously. Bilal is a very well-known organizer and advocate for tenants, workers and the homeless in downtown L.A., especially over the past 8-10 years.

The LA raid on OccupyLA was the same, minus the tear gas and pepper spray, of the raids on other camps.  As has been said these raids were coordinated, mostly likely with the help of Homeland Security and the FBI. Urged on by the Banks, Wall Street and many major corporations.

There is another phrase, “Police State” that seems to be fit. 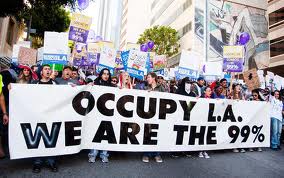 We Have Been Occupied

We went to press Nov. 23 before the massive attack on OccupyLA.   We are including an article, above.

Homeland Security fought a valiant battle, but the denizens from the Occupy Movement were able to seize control and fill this issue with articles.

Homeland Security, the FBI and many others have been coordinating the fight against this movement. They have had telephone conference calls with mayors from over 20 cities, organized by HSA, to figure out ways to malign and stop this movement that seeks to restrict Wall Street, the Banks and politicians from profiting by criminal means.

The similarity of police tactics with federal enforcement includes the use of pepper spray, destruction of tents and personal belongings and condemnations by local officials, among other strategies.

These students are taking many risks. Tuition for public universities can be $5000 a year.  Well over $20,000 a year for private schools. They will surely need those $100,000 salaries, when they graduate. Even so, they will be in debt to the banks for decades, sort of like slavery.

I tried being a pacifist for a few months in the Sixties, but found I wasn’t a pacifist at heart. When the cops hit me during actions, I pushed back and was hit harder, even got arrested once. When we were holding actions at the LA Induction Center in the Sixties to let potential inductees know that they could file for CO status, I got in a wrestling match with a few Sergeants and thrown out the door. A few minutes later one of them cold clocked me. My initial response was to put up my fists, but I noticed my buddies were backing away from three of them who were ready to pounce. So I backed down, too.  Now I try to stay away from such confrontations.

The Occupy Movement is handling this correctly. Their suffering at the hands of the state has built their movement, like the Civil Rights Movement in the Sixties did, operating nonviolently.

Was it accidental that Obama took his long Asian trip during the high points of the Occupations?  My guess is that he didn’t want to comment on the Occupy Movement.

Check out a few of these Websites that have campaigns and list Corporations that need to be shunned: