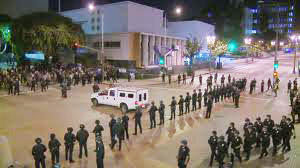 The eviction of Occupy Los Angeles from city hall park on November 30th happened because the city let us have enough rope to hang ourselves with and we took it. Many occupiers knew there were serious problems with drugs, alcohol and more at the encampment. We also knew that we did not introduce these problems to downtown Los Angeles.

The city and police knew what was going on too and these problems were discussed more or less openly in a number of city liaison meetings I attended. These were meetings between reps from the mayor and LAPD and self-appointed or selected occupiers that volunteered for this necessary but ultimately thankless task.

I think the city liaison work developed in a non-transparent, non GA approved way, like much of our work, not because of any sinister intentions, but because of the “fly by the seat of the pants” nature in which almost everything associated with Occupy LA developed in the early days.

After the initial efforts. in which the city council support resolution was secured and the practical right to keep tents on the grass, have porta potties, and amplified sound, etc. were gained, I think the most important function these meetings and phone calls served was to give the city a way to complain. For those doing this work, it was mostly about taking the heat and putting out the fires. We were trying to maintain a relationship with the city govt because that was the only basis upon which the occupation of city hall park was viable.

As I saw it, that was the main job of city liaison, to give them somebody to bitch and complain to, and to give them some private channels to do that in and us some idea about what was on their mind. Yes, much of this was on the qt, very ‘hush-hush’, non-transparent, not for public consumption or broadcast. Anyone who has ever been involved in talks of this kind knows that transparency is not so much a friend of that mission as confidentiality is.

I would also have to say that as a whole the city liaison team did not fairly represent Occupy LA in that it represented only those that believed in working with the police and the city, that thought we should ask for permission before we acted without it, thought city government had a legitimate role in coordinating and regulating the use of public resources, and wanted a climate of peace with the city and the LAPD so that we could focus on the fight against Wall St. Until that very last city liaison meeting, after which we were evicted, it did not represent those occupiers that opposed any discussions with the city, opposed any request for permits or thought from the very beginning that the main issue was ending police brutality at Occupy LA.

As someone who wanted to see the encampment at city hall continue through the winter and play the vital role that it could have played for the whole Occupy Wall St. movement in this period, I thought city liaison was doing an excellent job. While the city wanted us off the lawn of city hall sooner or later, for a whole variety of reasons, before the GA rebuked the city liaison team in the name of “transparency” , they were offering us buildings and farm land and floating January 31st as an agreeable end date for the last of the encampment.

The city liaison team was not agreeing, we were extending the talks, and with them the occupation. As far as I’m concerned, what we were doing was still working, as it had for seven weeks. Instead, occupiers demanded that the LAPD to come down to the GA and publicly air their issues with Occupy LA while the cameras are rolling. Nobody should be surprised that the eviction order quickly followed.

The encampment at Los Angeles City Hall that started on October 1st and ended with our eviction on November 30th was a tremendously important groundbreaking for Occupy Los Angeles. With over 400 tents and 500 overnight occupiers staying on city hall lawn, we build what was probably the largest encampment in the United States.

I could go on and on about the accomplishments of Occupy Los Angeles to date because they are not easy to minimize, but quite obviously, that is not the point of this critique. My intention here is to shine a bright light on our problems so that we can correct them and move forward. I will continue to say nobody can defeat this movement if we don’t defeat ourselves. Strength comes from within, but so does weakness. Nothing lasts forever and while the encampment at city hall had to end sooner or later, it could have ended later and on much more favorable terms.

As to the future, I think the eviction has actually had a liberating effect on Occupy Los Angeles. After two months, the sheer logistics of maintaining the camp, even without all the internal camp problems, was draining the energy of far too many activists. Now we are free to organize wide ranging campaigns all over Los Angeles.

If you enjoyed this post, please consider leaving a comment or subscribing to the RSS feed to have future articles delivered to your feed reader.
By John Johnson|2012-01-01T19:35:37-05:00January 1st, 2012|Big Business, Democracy, Editorial, Free Speech, Human Rights, Wall Street|0 Comments