Speaking to the media, Murillo expressed the “deep sorrow and pain” of the Government over the death of D’Escoto, 84, who was one of the four priests sanctioned by the Vatican for supporting the Sandinista revolution (1979-1990).

Miguel D’Escoto Brockmann was born in Los Angeles, California, on February 5, 1933. Son of a diplomat very close to dictator Anastasio Somoza, he was ordained a priest of the Maryknoll Order and embraced Liberation Theology in the 1970s.

Prior to the overthrow of Somoza by the guerrillas of the Sandinista National Liberation Front (FSLN) in 1979, he was part of the Group of Twelve, a civic organization of noted opponents of the dynastic regime. 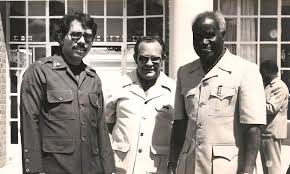 After the Sandinista defeat at the polls (1990), D’Escoto was one of the few figures who remained loyal to Ortega, who upon returning to power in 2007 appointed him Nicaragua’s representative at the United Nations. In 2008, D’Escoto chaired the UN General Assembly for a one-year term.

If you enjoyed this post, please consider leaving a comment or subscribing to the RSS feed to have future articles delivered to your feed reader.
By Change-Links|2017-07-01T22:31:20-05:00July 1st, 2017|Historical, In Memoriam, Latin America, Peace|0 Comments