Marta Hernecker’s was not an adventurist-head and not an adventurist-voice, which made her a leading theoretician for people of her time. Rather, years of learning from struggles helped her take an approach linking to reality and perspective, alignment of classes and balance of power of hostile classes. This led her to say:

The sociologist, political scientist, and activist from Chile was close comrade of Hugo Chavez, the Bolivarian revolutionary leader of Venezuela and one of the most hated figures to the imperialists.

To Marta, today’s Venezuela is a laboratory of the Bolivarian revolution. By type of a number of works, she was also a journalist also. But, her no work took her away from political fight of people for a humane world. She was not without any idea, which is devoid of political action.

“In order for political action to be effective, so that protests, resistance and struggles are genuinely able to change things, to convert mass uprisings into revolutions, a political instrument capable of overcoming the dispersion and fragmentation of the exploited and the oppressed is required: one that can create spaces to bring together those who, in spite of their differences, have a common enemy; that is able to strengthen existing struggles and promote others by orientating their actions according to a thorough analysis of the political situation; that can act as an instrument for cohering the many expressions of resistance and struggle.” (“A Political Instrument Appropriate for Each Reality”, The Bullet, January 25, 2019, The Socialist Project, Toronto, Ontario) It’s an essential line of approach today; because the bourgeoisie are fragmenting the exploited with different colors – the tact that weakens the exploited and strengthens the exploiters.

The theoretician was always at the frontline, from country to country. She summarized lessons from successful revolutions:

“The history of triumphant revolutions clearly demonstrates what can be achieved when a political instrument exists that is capable of raising an alternative national program to unify the struggles of diverse social actors behind a common goal […]” (ibid.)

And, she emphasized: “[…] actions be carried out at the right place and the right time, always seeking out the weakest link in the enemy’s chain.” (ibid.) It’s the same lesson Lenin taught through the Great October Revolution: right place, right time, enemy’s weakest link.

Marta talks about political instrument: “The political instrument is like a piston in a locomotive which transforms steam power into the motion that is transmitted to the wheels, driving the locomotive forward, and with it, the whole train. Strong organizational cohesion does not alone provide the major objective capacity for acting, but at the same time, it creates an internal climate that makes possible energetic interventions into events, profiting from the opportunities these offer. It must be remembered that in politics, one does not only have to be right but one must also be timely and rely on strength to achieve success.” (ibid.) Her idea of political instrument of today is in the context of existing reality.

She admits: This task needs time, research and knowledge of the national and international situation. It is not something that can be improvised overnight, much less so in the complex world in which we live.” (ibid.) There are “heroes” who don’t have time to learn and research but have more than enough time for slogan-mongering, and have enough time to indulge in ignorance. But, Marx, emphatically said: Ignorance brings no good. Rather, ignorance compresses one into anarchism, and encourages to declining looking at social process. The bourgeoisie want super-production of ignorant “heroes” spewing only slogans, and no effort for spadework, and no humbleness to learn. For these “heroes”, the point Marta raises is a lesson, if they like.

However, Marta doesn’t forget the aspect related to broader spectrum. She writes: “[…] I believe we must be very mindful that, as it progresses, this project should be enriched and modified by social practice, with opinions and suggestions from the social actors because, as previously stated, socialism cannot be decreed from on high, it has to be built with the people.” (ibid.) Therefore, there’s no scope for sectarianism.

Marta discusses the question of popular struggle with specific characteristics and specific context: “[…] at this time in our countries, the popular struggle is developing in very different circumstances from those of czarist Russia. But it is also obvious that Venezuela is not Cuba nor Nicaragua, nor is Bolivia the same as Ecuador. In each country, there are different circumstances that mediate the strategy and modify the forms of popular struggle. Consequently, I do not believe it is useful to propose a template with a formal structure that the revolutionary instrument would have to be.” (ibid.) Therefore, it appears, she was free from dogma, free from the machine-made-theory approach for all countries.

Marta Harnecker participated in the revolutionary process of 1970-1973 in Chile. After studying with Louis Althusser in Paris, she returned to Chile in 1968, and joined the Socialist Party of Chile. 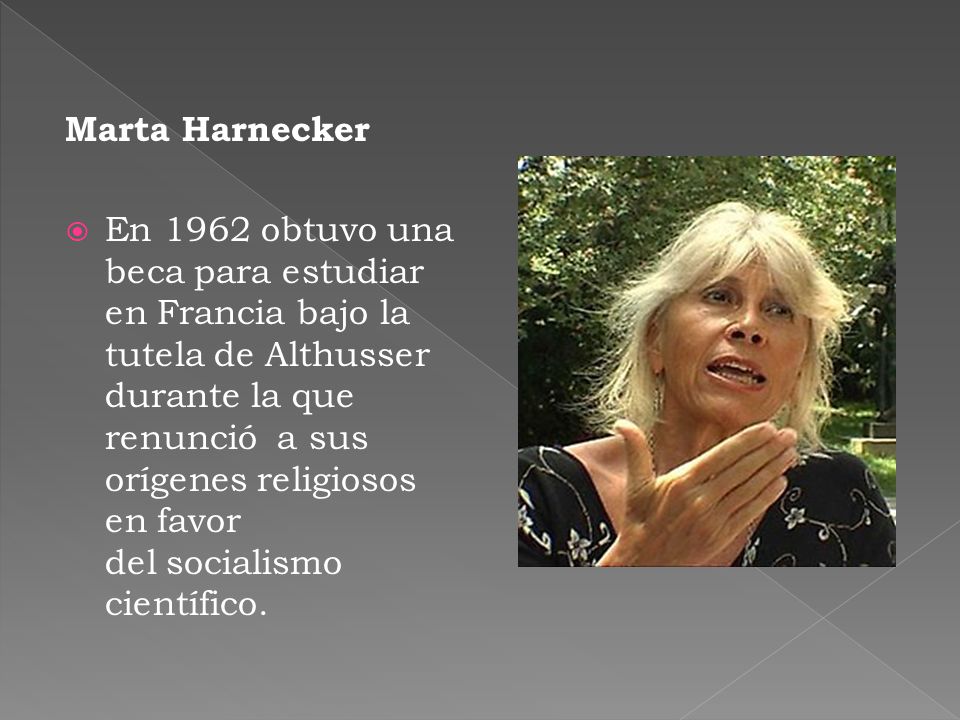 In 1973, after the overthrow of the government of president Salvador Allende by the US-backed coup d’état led by General Pinochet Marta was forced into exile in Cuba. She has written extensively on the Cuban Revolution. She also lived in Caracas and was a participant in the Venezuelan revolution. Marta Harnecker was the director of research institute Memoria Popular Latinoamericana (MEPLA).

In 2002, Marta interviewed Chavez for fifteen hours, the longest interview Chavez has given since 1997, before he was elected president.

One of her famous books is A World to Build: New Paths toward Twenty-First Century Socialism. Marta’s Fidel: la estrategia política de la victoria (Fidel: The Political Strategy of Victory) discusses the revolutionary process in Cuba.

Marta was entrusted the editing and indexation of the booklet El nuevo mapa estratégico (The New Strategic Map), a collection of speeches by Chavez in November 2004. This booklet contains the condensed doctrine of the Bolivarian Revolution.

Marta discusses the question of hegemony of different types:

“Popular movements and, more generally, the different social protagonists who to-day are engaged in the struggle against neoliberal globalization both at the international and national levels reject, with good reason, attitudes that aim to impose hegemony or control over movements. They don’t accept the steamroller policy that some political and social organizations tended to use that, taking advantage of their position of strength and monopolizing political positions, attempt to manipulate the movement. They don’t accept the authoritarian imposition of a leadership from above; they don’t accept attempts made to lead movements by simply giving orders, no matter how correct they are. Such attitudes, instead of bringing forces together, have the opposite effect. On the one hand, it creates discontent in the other organizations; they feel manipulated and obligated to accept decisions in which they’ve had no participation; and on the other hand, it reduces the number of potential allies, given that an organization that assumes such positions is incapable of representing the real interests of all sectors of the population and often provokes mistrust and skepticism among them. But to fight against positions that seek to impose hegemony does not mean renouncing the fight to win hegemony, which is nothing else but attempting to win over, to persuade others of the correctness of our criteria and the validity of our proposals.” (Ideas for the Struggle, pamphlet, Socialist Project, Toronto, Ontario, August 2010, notes omitted.)

Her practical proposal was:

On building up a counter-position to capitalism in Latin America, Marta said: “We are beginning a new cycle of revolutionary advancement and we must accelerate the construction of the subjective factors that circumvent new historical frustrations. Unfortunately, there are few countries where the social and political forces of the left work harmoniously reinforcing each other. Egoism and political ambition usually prevails among their leaders. They have not sufficiently understood that power is in unity and that unity is constructed by respecting each other’s differences. They have not sufficiently understood that the art of politics is to construct a political and social force capable of making that which appears impossible today, possible in the near future; that in order to construct political strength you must construct social strength.” (ibid.) Here is a statement that should be taken seriously – We are beginning a new cycle of revolutionary advancement. However, there are a few theoreticians in the camp of the people, who only see rise of the right, only see a rightward tilt of the time – “victory” of neoliberalism. They miss the dialectics – people’s struggles are building up in countries, imperialism is finding its tactics are failing in countries at times, imperialism’s assessments are turning wrong at times, a few theories imperialism asserted with are turning outdated in regions. So, with revolutionary spirit, Marta lives, lives in places far away from those timid scholars.

Marta Harnecker is author of more than 60 books that include:

The Basic Concepts of Historical Materialism

The Left after Seattle

Comrade Marta Harnecker’s march along people will not cease as the people are building up and intensifying their struggles in countries in Latin America, as political activists in countries go through her works to chart respective path of revolution – the path to emancipation and freedom.

If you enjoyed this post, please consider leaving a comment or subscribing to the RSS feed to have future articles delivered to your feed reader.
By Change-Links|2019-07-04T20:20:43-05:00July 4th, 2019|Activism, Anti-capitalism, Economy, Heroes and Whistleblowers, Historical, Human Rights, In Memoriam, Latin America, Movements, Obituary|0 Comments