Sure, it’s old fashioned. But it’s also nutritional rocket fuel, and athletes are making it taste great. Here’s how.     In a world of green juice and chia seed pudding, this age-old dish is the original, and perhaps most powerful, super-food, especially for athletes competing at the highest levels.

“I’ve asked a lot of elite endurance athletes about their breakfast foods, particularly before races, and oatmeal comes up again and again and again,” says Matt Fitzgerald, endurance coach, nutritionist, and author of The Endurance Diet.

You’re most likely to see oatmeal served with a ton of fixin’s, but even a bowl of plain oats holds its own as a nutritional panacea. Oatmeal is a whole grain (unless you buy oat bran—just part of the seed—as opposed to rolled oats) filled with key vitamins and minerals, a low-glycemic carb that provides lasting energy for your workout and helps fuel recovery without causing a sugar crash, and high in fiber to aid your digestive and metabolic systems.

But a bowl of oats is also a big blank canvas, ready to be combined with a truckload of other high-quality, nutritious ingredients that make it even better training food. “That’s one of oatmeal’s great virtues. You can take it in so many directions,” says Fitzgerald. 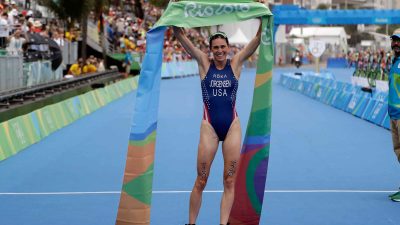 Gwen Jorgensen is arguably the most dominant triathlete alive. In 2014 and 2015, she competed in 12 World Triathlon Series races and won every single one, becoming the back-to-back ITU World Triathlon Series champion. As such, Jorgensen trains a lot—often three or four times in one day—which means she needs to eat just as much. “When I first started training for triathlons, I wasn’t eating enough, and it showed in my performance,” she said last year. “I started to work with a nutritionist, and we decided to start front-loading my days. I now eat a larger breakfast and lunch.” Her breakfast staple: the world’s biggest bowl of oatmeal.

4 eggs (Poach ahead of time in water with a bit of vinegar and salt.) 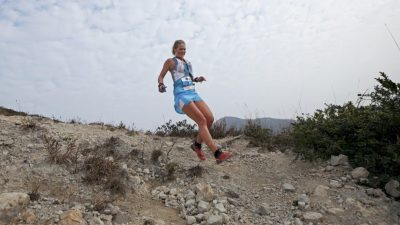 Lucy Bartholomew is a 21-year-old Melbourne-based ultrarunner who transitioned to an entirely plant-based diet a few years ago. “I first made the switch based purely on thinking it was the healthier choice. I quickly learned that you have to be educated about it, and that you can’t simply cut out a food group and hope for the pyramid to remain stable, especially as a female long-distance runner,” she says. Oatmeal, which Bartholomew enjoys before and after runs, has become one of her staple dishes, in part because it allows for a variety of ingredients and macronutrients—fat, carbs, and protein. “I always carry a bag of quick oats at airports and hotels,” she says. Before a run, she keeps it classic: a little maple syrup and nut butter stirred in right at the end, then topped with banana and cinnamon. But to expedite her recovery, Bartholomew has a more indulgent recipe.

Cook and top with 1/4 cup each walnuts and chopped dates, plus a sprinkle of cinnamon.

If you enjoyed this post, please consider leaving a comment or subscribing to the RSS feed to have future articles delivered to your feed reader.
By Change-Links|2020-12-01T20:47:33-05:00December 1st, 2020|Food, Health, Sports|0 Comments