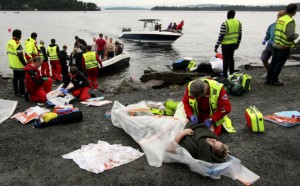 When Extremism Learns to Blow Things Up

The revelation by CNN that Norwegian right wing terrorist Anders Behring Breivik kept a diary in which he obsessed about the dangers of cultural Marxism, multiculturalism, and the “Islamification” of Europe will remind many Americans of the tactics of our own right wing (only these themes have been taken up by people much more mainstream in the US than Breivik is in Norway!) The movement to ban the shariah, the castigation of a progressive income tax as “Marxist,” the condemnation of multiculturalism as a threat to Western values, are all themes commonly heard in the US Tea Party and in the right wing of the Israel lobbies.

It would be wrong, of course, to suggest that anyone who hits these themes is a terrorist in waiting or supports violence.

But here is the reason for which such rhetoric is dangerous and can easily lead to social violence.

It is black and white, allowing no nuance. Immigration is not a smooth process, and is attended with problems in some cases. The history of the United States, an immigrant society, suggests that whatever the problems are, they are not insuperable. But Breivik saw Muslim immigration in particular as a threat to the very identity of Europe. That is, if the immigration from the Middle East were allowed to continue, then ultimately there would be no Europe, just a big Iran on all sides of the Mediterranean. Moreover, he imagined this process of Islamification as happening very quickly.

Breivik’s thinking is not new under the sun. Protestant Nativists of the “Native American” and later “Know-Nothing” (i.e. secret society) movement in the 1830s through 1850s in the United States felt exactly the same way about Catholic immigrants to the US. America wouldn’t be America if this went on. Their values were inherently incompatible with the Constitution. Their loyalties were to an anti-modern foreign court dedicated to reinforcement of political and intellectual tyranny. The hordes of them would take over the country before too long. The combination of black-and-white thinking and a conviction that undesirable change is coming very rapidly often provokes violence. Brian Porter’s When Nationalism Learned to Hate makes the point about Poland, that peaceful democratic processes depend crucially on patience and a conviction that the future can be won. When members of a movement become impatient and believe that the situation could quickly and unalterably shift against them, they are much more likely to turn to violence.

Catholic immigrants to the US, like Muslim immigrants to Europe, cannot in fact be characterized in a black and white way. Catholics in the contemporary US are politically and socially diverse, but on the whole are more socially liberal than evangelical Protestants. That is, if the Know-Nothings were afraid of an anti-Enlightenment religious movement, it would have been to their own, Protestant ranks, that they should have looked.

Likewise, making a black-and-white division between “Christian” Europe and “Islam” is frankly silly. The European continent is itself a fiction (it is geologically contiguous with North Africa, and there is no eastern geographical feature that divides it from Afro-Asia). Islam has been the religion of millions of Europeans over the past 1400 years, whether in Umayyad Spain, Arab Sicily, or Ottoman Eastern Europe, and Muslim contributions to European advances are widely acknowledged.

As for contemporary Muslims in Europe, they are diverse. Overwhelmingly, e.g., Parisian Muslims say that they are loyal to France. About half of the Turks in Germany are from the Alevi sect, a kind of folk Shiism, and most of those are not very religious and politically are just social democrats (oh, the horror of Breivik’s nightmare– Muslim progressives in Europe!) That the few hundred thousand Muslims in Spain (pop. 45 mn.) , or the 4 million in Turkey (5 percent of the population) could effect a revolution in European affairs of the sort Breivik fears is frankly absurd, especially since Muslims are not a political bloc who agree with one another about politics and society. They are from different countries and traditions. Many do not have full citizenship or voting rights, most of the rest are apolitical. But even if they became a substantial proportion of the population, they would be unlikely to change Europe’s way of doing things that much.

Breivik, of course, also exercised black-and-white thinking about the left of center currents in Europe, amalgamating them all to Marxism, presumably of a Soviet sort, and seeing them as taking over. In fact, ironically, it is parties and rhetoric that Breivik would have approved of that are making the most rapid strides in Europe. Right wing parties that would once have been pariahs have been power brokers in Sweden and Finland, and Nicolas Sarkozy has borrowed so much rhetoric from the LePens that some accuse him of legitimizing them.

Worrying about the impact of immigration is not pernicious. Opposing leftist political ideas is everyone’s right in a democracy. Disagreeing over religion is natural.

But when you hear people talking about lumping all these issues together; when you hear them obliterating distinctions and using black-and-white rhetoric; when you hear them talk of existential threats, and above all when you see that they are convinced that small movements that they hate are likely to have an immediate and revolutionary impact, then you should be afraid, be very afraid. That is when extremism learns to hate, and turns to violence.

Democracy depends on a different kind of rhetoric. Healthy politics is about specific programs, not about conspiracy theories as to what underlies someone’s commitment to a program. Most Americans don’t want people to die because of not being able to afford health care. Lambasting that sentiment as tyrannical Bolshevism is a recipe for social conflict.

Unfortunately, some unscrupulous billionaires, Rupert Murdoch and the Koch Brothers prominent among them, have honed their propaganda skills in the media and public life. The promotion of hate, panic, and fear, especially if it is tied to specific political, ethnic and religious groups, always risks violence.

The real message of Breivik is that we should all take a deep breath and step back from the precipice.

If you enjoyed this post, please consider leaving a comment or subscribing to the RSS feed to have future articles delivered to your feed reader.
By John Johnson|2011-08-01T14:05:19-05:00August 1st, 2011|Editorial, Human Rights, News|0 Comments