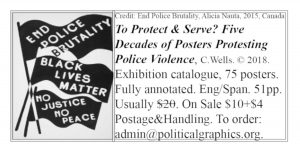 To Protect & Serve? Five Decades of Posters Protesting Police Violence/Proteger y Servir? Cinco decadas de carteles protestando la violencia policial by the Center for the Study of Political Graphics, 2018, CSPG, Culver City CA, $20. This bilingual, profusely illustrated volume is the catalog of an exhibited mounted by the Center earlier this year from its extensive archive of movement posters. It covers struggles from the 1960s to date, all of them touching in one way or another on police violence, racist abuse of power and repression. But given that anchor, themes range widely, including resistance to the Ku Klux Klan, opposition to imperialist war, struggles to free political prisoners or defend labor, gay or women’s rights. It includes both US and international struggles and examples. Regrettably, the cost of production means that the reproductions of the posters included are all in black and white, reducing some of the vibrancy that the original posters as exhibited possess, but profusion of graphic material and the extensive detail in each description, bringing the context to life, more than compensates for that. 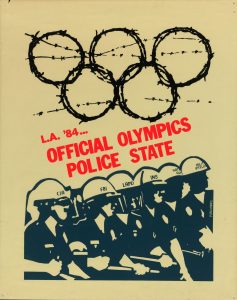 In the interests of full disclosure, I should note that I worked on a number of the posters and struggles included, such as the 1984 L.A. Olympics Police State poster, and the material from the Crack the CIA Coalition and campaigns to free political prisoners.