After years of delays, Metro announced that the official opening of the K Line will be on October 7. The light rail line will initially serve seven stations through several LA communities, including Leimert Park and Baldwin Hills, as well as the city of Inglewood. In recognition of the accomplishment, Metro will suspend fares across the entire transit system October 7-9. 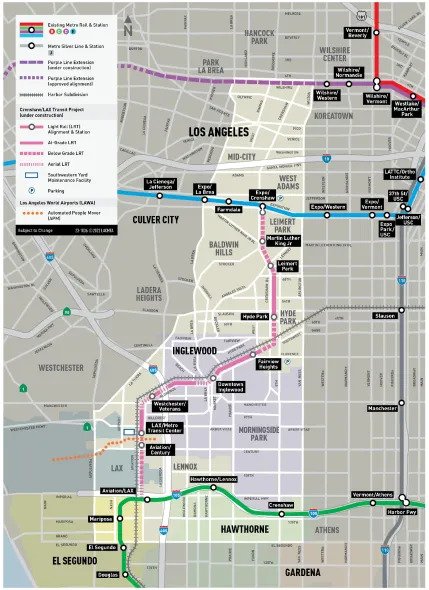 The K Line will initially serve seven new stations between Expo/Crenshaw and Westchester/Veterans — see the map at right. The city of Inglewood will have three stations and many other communities will finally have easy access to the Metro Rail system, including Baldwin Hills, the Crenshaw Corridor, Hyde Park, Jefferson Park, West Adams and Westchester. Once the full line opens, it will extend to the vicinity of LAX and connect with the People Mover for access to the airport.

In 2023 and 2024, additional stations will open to serve LAX and then eventually connect to the C (Green) line which runs to Norwalk. Metro also has plans to extend the line north to connect with the D (Purple) Line on Wilshire in West Hollywood and the B (Red) Line in Hollywood.