The Elites Are Unanimous: Lower Everyone’s Wages and Standard of Living

— Except They Don’t Say it Out Loud 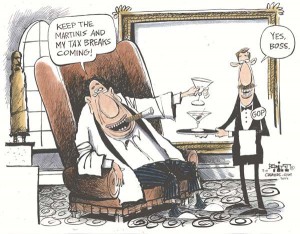 America’s 1% are in harmony on the matter that concerns them most — who gets the biggest slice of the pie.

This essay is derived from Jeff Faux’s new book, The Servant Economy: ​Where America’s Elite is Sending the Middle Class, which William Greider calls a “really important book” that tells the “astonishing story of how class works.”

Calls for a bipartisan “Grand Bargain” on taxes and spending for the next decade ring out daily, if not hourly, from the politicians and pundits who dominate our political media. But the national discourse is silent on the tacit agreement both parties have already made on the future that lies ahead for the majority of working Americans: a dramatic drop in their living standards.

The United States can no longer satisfy the three great dreams that have driven most of its domestic politics since the end of World War II: the multinational corporate class’s dream of limitless profits; the military-industrial complex’s dream of global hegemony; and the dream of the people for rising incomes and expanding opportunities. One out of three? Certainly. Two out of three? Maybe. All three? No.

So far, Corporate America gets priority boarding in the economic lifeboat – with the safest seats reserved for Wall Street. Four years after the crash, the financial sector remains heavily subsidized with cheap federal loans that it uses to buy higher yielding bonds, speculate in exotic IOUs and pay outrageous salaries to those at the top. Larger than ever, they are more than ever “too big to fail.” As a result, Wall Street continues to divert the nation’s capital away from investment in sustainable high-quality jobs in America.

Next in line is the Pentagon and its vast network of corporate contractors, members of Congress with military facilities in their districts and media propagandists for the empire. The administration, along with some libertarian Republicans, insists that military spending will not be spared in the coming era of austerity, and has proposed modest cuts over the next decade. At the same time, virtually all of Washington supports the policies that require huge defense budgets, i.e., remaining in the Middle East, expanding in Latin America and containing China in its own neighborhood. The threatened across-the-board cuts in federal spending that become automatic if a long- term budget deal is not made by December will almost certainly be finessed in order to protect the military budget.

All of which leaves the American middle class on a badly listing, although not yet sinking, economic ship. Even before the financial crash, real wages for the typical American worker had been stagnant for 30 years as a result of: 1) trade and investment deregulation that shoved American workers into a brutally competitive global labor market for which they were unprepared; 2) the relentless war on unions that began with the election of Ronald Reagan in 1980; and 3) more recently, the erosion of the social safety net for low wage workers and the unemployed.

Today, with more women than men now employed, gains to family income from sending the wife to work are about exhausted. And given the huge overhang of non-payable debt on the part of both banks and consumers it will be a generation, if ever, before we see anther credit balloon strong enough to lift up the economy. So, now that these financial props have been knocked away, the trajectory of American incomes and living standards is a downward slope.

This decline will not be reversed by the long-awaited upturn in the currently stalled business cycle. Even with optimistic assumptions – e.g., that there will be no new recession, Europe avoids collapse, big US banks remain solvent — there is little prospect for a sustained boom in the demand for American labor sufficient to overcome the downward pressure on workers’ share of the economic pie. Cost cutting has become the central strategy for most American business, and for most of them the easiest cost to cut is labor.

The squeeze is not limited to workers in export or import-vulnerable industries. Wages and salaries are now falling across the board, in services and manufacturing sectors, among women and men, young and old. Health and pension benefits are being slashed and businesses are getting their work done with part-time and temporary workers, often supplied by labor contractors whose own survival depends on hiring labor at the cheapest rate possible.

Moreover, going to college is no longer the escape route for the vast majority of young people without elite connections or rich parents. The Bureau of Labor Statistics projects that between 2010 and 2020, nine out of 10 of the largest and fastest growing occupational categories will not require a college education. And the tenth, which includes medical professionals and college teachers, are likely to suffer dramatically in the coming age of fiscal austerity. The bright college graduates working as retail clerks at the Apple Store for $12 an hour are beginning to sense that their jobs do not represent a pause on the way up the professional ladder, but rather are a taste of their long-term future.

In the first few month of his term, Barack Obama signaled that he understood that the crisis of the middle class was more than a temporary condition of the business cycle. “We cannot rebuild this economy on the same pile of sand,” he said. “ We must build our house upon a rock… a foundation that will move us from an era of borrow and spend to one where we save and invest.”

The building blocks of a new high-wage foundation are reasonably clear: 1) large government-led investment in infrastructure, education and new technologies that can create demand for jobs in both the short and long run; 2) Strict regulation of Wall Street and new trade policies to re-channel the country’s private capital away from short-term speculation and back to long term investment in producing high value-added goods and services in America; 3) a shift in national security policy away from world dominance and toward a a narrower definition of national defense.

Three and a half years later we are still stuck in the economic sand pile. The prolonged recession has further weakened the economy’s underpinnings and the failure of a “liberal” president to restore growth has discredited government – the institution that must lead any successful transition to a new economic path.

Certainly, most of the blame lies with the reactionary Republicans whose fear of their lunatic fringe trumps loyalty to their country. And there’s been some bad luck, such as the European crisis. But Obama shares some culpability. He took up the Bush plan for no-strings Wall Street bailouts, expanded unregulated trade, cold-shouldered his union base, and has now adopted fiscal austerity as his economic priority. Whether you think the president is a wimp, a willing tool of Wall Street or a political saint mugged by right-wing thugs, the fact remains that he could or would not engage in all-out battle for the economic transformation he so eloquently promised.

The last four years have demonstrated that, taken together as a governing class, the leaders of our two-party system are currently unwilling to do what is necessary to reverse declining standards. As for the next four, given the choice, Obama is clearly the better option. Under Democrats, the slide will be less steep and rough. Whoever the “real” Romney might be, the extinction of Republican moderates among the Party’s pool of potential policymakers means that his administration will be largely staffed by conservative fundamentalists and corporate fixers who can’t wait to return us to the dog-eat-dog labor markets of the pre-New Deal.

But Obama, if re-elected, will certainly not have a greater congressional majority than he had in 2009. Moreover, given the massive campaign contributions he will have had to raise fromWall Street and the rest of Corporate America, the elite investor class will play an even more influential role in his victory. Add in the bipartisan commitment to budget austerity, and chances of a significant progressive shift in Washington’s economic policies over the next presidential term become virtually zero.

The mantra of both candidates is, “Jobs, jobs, jobs.” What they leave out is that, because they are unwilling to confront the power of Wall Street and the Pentagon, job growth in America now depends on driving labor costs lower loser and lower to attract business investment. This is the heart of the leveraged-buy out system that Romney offers to bring to the White House. And when Barack Obama cites an expanded GE plant in Kentucky as an example of the rebound of private sector jobs, the press release does not mention that workers who used to make $22 an hour are now making $14.

None of this is a secret to most of our governing class. Certainly, the CEOs and their major shareholders know it. Their economists know it. So do all but the most hopelessly ideological of policymakers. But acknowledging where future living standards are heading would require our political leaders to offer remedies that are unacceptable to Wall Street and the military-industrial complex. Safer not to look into the economic abyss and trust in good old American optimism.

Neither does the public want to stare too hard into the future. Majorities think that the next generation is going to be worse off, but they expect that they, personally, and their kids will be okay. So, while they might agree with the points made by the Wall Street Occupiers, it’s not worth the effort to join the protest. A PEW poll last fall reported that by a margin of 63-21 Americans believed that, “although there may be bad times every now and then, America will always continue to be prosperous and make economic progress.”

The American writer James Baldwin wrote, “Not everything that is faced can be changed, but nothing can be changed until it is faced.” Until Americans face that they and their kids will not be okay, and that their own personal future depends on their ability to find leaders to willing to act on that reality, the implicit Washington grand bargain will remain in force. And we will continue on the road toward lower wages, falling living standards and blasted hopes.

Jeff Faux is the founder and former president of the Economic Policy Institute and the author of the new book The Servant Economy: Where America’s Elite is Sending the Middle Class.