Life is the product cheapest to produce;
– control; – exploit;  to  market;
– harvest- or expropriate;   – extinguish;
– or just leave to rot….
its cheap profusion, programmed in the
glands of man or beast, anticipated in
prophetic seed, is self-perpetuating –
at no added cost…
– and ‘man’ can force it into tender
tissue
– brutally, – invasively;
– irrevocably;
– fatally
– and there control it, at the host’s
expense
– to thrive; – or twist; – or wilt…
– or profitably thence extract it prematurely –
before it manifests its temporary presence
in its mortal frame
– and savor it as caviar,
omelet;
– flaunt as rankling pearl…
– and at each stage, life’s very substance
has a market value – far greater than
the sum of all investments
vested in its
procreation – ineluctable…
– because life’s wholesale harvest,
redistributed for consummation,
yields profitable commerce:
from drift-net;
cage; or feedlot,
on to slaughterhouse
– manifold life’s manifest trajectory proceeds
pursuant to life’s man-made destiny… 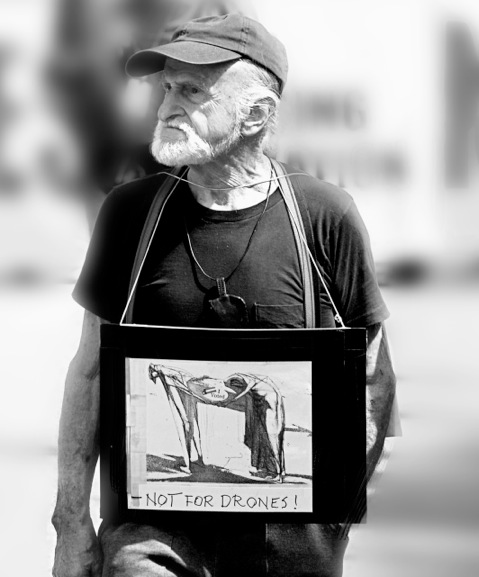 Holocaust escapee and professor, Ernest Rosenthal does not consider himself a poet, but a polemicist, using poetic devices.  Regardless, his words speak with such first-hand wisdom that it is difficult to accept them as anything other than truth.  Also a long time activist in the Los Angeles area, Ernest’s writings have been praised by such notables as Jack Hirschman, Howard Zinn, Richard Falk and his dear friend, Don White. This month’s Poetry Corner celebrates Ernest’s upcoming 96th birthday with his polemic poem, Life Inc.  His major opus, Not for Drones, was published in 2012, by Vagabond Books and is currently available at      http://www.vagabondbooks.net

Submissions for future issues are welcome.

If you enjoyed this post, please consider leaving a comment or subscribing to the RSS feed to have future articles delivered to your feed reader.
By Change-Links|2014-12-01T22:42:08-05:00December 1st, 2014|Poetry Corner|0 Comments