In the May issue, you carried an article promoting AB931 as a legislative effort to cut police killings. We urge caution about this bill, which has already been amended twice since submission. One key element is to look at the concept of “totality of circumstances.”  It is very much a part of the bill.

You can see the bill as amended here: httpss://leginfo.legislature.ca.gov/faces/billNavClient.xhtml?bill_id=201720180AB931 The key language in the official digest is: “This bill would make a homicide committed by a peace officer justifiable only if the use of deadly force by a peace officer was necessary given the totality of the circumstances [emphasis added], as specified, but would exclude those situations in which the gross negligence of the officer contributes to creating the necessity.”

AB 931 is a slight shift in the use of deadly force standard, but the issue here is that policing practices like predictive policing, SARs (Suspicious Activity Reports) and others that are grounded in counter-insurgency policing inherently create the “necessary” standard by providing “data” that justify racial profiling.  Furthermore court decisions such as the 2000 Supreme court decision on the designation of high crime area counts toward the suspicion necessary to justify a stop, search, or arrest.  Here’s the citation for that case:  Illinois v. Wardlow, 528 U.S. 119 (2000) (holding that the characteristics of an area, such as whether it is known for crime, can contribute to the reasonable suspicion necessary to stop an individual found in that area).

Predictive policing makes it even easier for police to justify stopping and searching persons hanging out at corners.  This will also lead to more use of deadly force by police.  Cops often justify their use of deadly force by emphasizing the threat they reasonably felt to their own safety during a street encounter. There’s also a case on that: Tennessee v. Garner, 471 U.S. 1 (1985) (holding that deadly force is constitutional when a police officer “reasonably believes that the suspect poses an immediate threat” either to the officer’s safety or to the safety of others). AB931 does not change that.

Because the police will interpret behavior and view individuals more suspiciously when the algorithm predicts that the person, or the location, is crime prone, they may react more aggressively and use deadly force sooner than they might otherwise have done so. After the fact, the police are likely to argue that the predictive policing tools justified their fear and actions, and courts are likely to credit the fears of officer safety when finding that the police behaved lawfully.

So in essence given predictive policing “hot spots” configuration, chronic offender bulletins, LASER and other programs, they are already walking into situations with the mindset of “necessary” that becomes “justifiable homicide.”

Lastly in principle do we want to support use of force and in many cases deadly use of force in any circumstances.  There are other issues to but I wanted to share some initial thoughts.  Our fight needs to focus on the dismantlement of programs such as predictive policing, PredPol and LASER (Los Angeles Strategic Extraction and Restoration) which put a patina of science and objectivity on racial profiling. You can sign a petition to do so here: httpss://petitions.moveon.org/sign/lapd-must-rescind-predictive-1 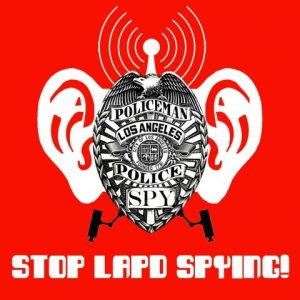 Change Links response: We value the work of the Stop LAPD Spying Coalition, and appreciate the reminder rooted in your research of the limits of reform when systemic change is needed. We note LA’s supposed civilian oversight body just recommended a serial killer cop as a top candidate for LAPD chief. The LA Times reported, in a single throw-away line, that Asst. Chief Michel Moore had fatally shot two people in separate incidents earlier in his LAPD career, yet he was twice named a finalist for Chief, losing to Beck last time but again one of the top three forwarded to Garcetti by the Police Commission!

This piece of toilet paper you call a newspaper is the most racist, prejudicial, inflammatory, anti-American, communist propaganda I’ve ever seen. Fortunately, we live in America, so you can spout your ignorant banter without much retribution. But articles like, “free speech has limits” by Greg Foisie, is just totally hypocritical and completely ignorant, narcissistic, entitled, hater, cry baby, fascist and more over irresponsible. Does he suggest any solutions or provide sources for his prejudice? No, for that reason and many others your publication is hardly worthy of being used as toilet paper by your “oppressed” reader base.

Contrary to your belief, nobody is literally oppressed in America, anyone can succeed if they have talent, skill set, persistence and unique abilities to get ahead. If you can’t, then stay in your lane and stop blaming others for your shortcomings… Nobody owes yoU!!!

Change Links response: Your denial of the reality of exploitation and oppression in the US does not justify your name calling. We reject your charge that we are racist or prejudicial, but we feel that your finding the paper “the most inflammatory propaganda you have ever seen” is quite a badge of honor. We are glad to have gotten under your skin.

If you enjoyed this post, please consider leaving a comment or subscribing to the RSS feed to have future articles delivered to your feed reader.
By Change-Links|2018-05-28T01:47:48-05:00May 28th, 2018|Commentary, Letters, Letters To Editors|0 Comments