Letter to the Editor

Letter to the Editor from Ray Jones

Still alive and well??? …  “Trump still does not comprehend the seriousness or the urgency of the health and economic crises facing working families,” House Speaker Nancy Pelosi and Senate Majority Leader Chuck Schumer said Saturday evening in a joint statement.

“We’re disappointed that instead of putting in the work to solve Americans’ problems, the President instead recently chose to stay on his luxury golf course to announce unworkable, weak and narrow policy announcements to slash the unemployment benefits that millions desperately need and endanger seniors’ Social Security and Medicare.”… 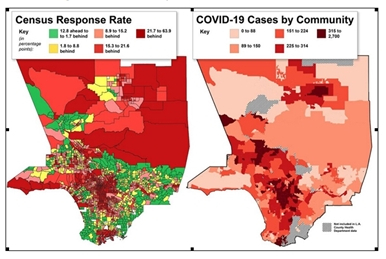 Editor: The maps Ray sent with his letter, which  we were unable to reproduce in the black and white newsprint edition, show that the areas of Los Angeles, particularly the inner city of South LA, with the highest rates of coronavirus infections, are also the areas with the lowest levels of census participation. This is a double whammy, and now Trump’s administration has announced that census data collection will end early, on September 30.

Please make sure to get counted. The census determines allocations for all sorts of federal benefits and subsidies, as well as apportionment of representation for Congress and local legislative bodies. Destruction of the census, along with the post office (both requirements of the US Constitution) are aspects of Trump’s genocidal voter suppression strategy.

If you enjoyed this post, please consider leaving a comment or subscribing to the RSS feed to have future articles delivered to your feed reader.
By Change-Links|2020-09-02T01:30:21-05:00September 2nd, 2020|Anti-Racism/Racism, COVID-19, Donald Trump, Ray Jones|0 Comments