Let’s Defend Dreamers and All Immigrants

Monica is an enthusiastic young math major at Los Angeles City College (LACC). She is an undocumented immigrant brought here from Mexico at the age of five. She shoulders the primary care of her two younger brothers while her single mom works long hours, six days a week. At one time, they were homeless. Her name has been changed to avoid persecution.

Monica’s story is only one of many told by the nearly 3,000 undocumented students at the college. They are part of the 1.27 million youth called “Dreamers” after the failed DREAM Act of 2012, which would have provided them a path to legalization, but one that was long and expensive and would have pushed many into the military.

My antepasados were from Chihuahua, Mexico. They migrated to El Paso, Texas, after the Mexican Revolution, and to California before WWII. I am a Chicana and longtime immigrant rights activist. So when I returned to school in 2015, I sympathized with my Dreamer classmates.

When Trump took office last January, threatening to deport all 11 million undocumented immigrants, as well as rescind Obama’s Deferred Action for Childhood Arrivals (DACA) program, students, counselors, faculty, and administrators quickly joined forces to aid the students through this crisis. I joined the IDEAS @ LACC Club (Improving Dreams, Equality, Access and Success), which is student organized to provide a safe place for immigrant students and services to help them continue their educations.

“My” Dreamers are primarily Latin@s from Mexico and Central America. But the club includes students from Africa, Asia, and the Middle East, with several LGBTQ members. Even though I’m older, I am treated as equal and my socialist perspectives are readily accepted. Some students are, like me, taking a radical course to fight the system that abuses both U.S. workers and immigrants.

I see how difficult it is for them to keep up with course studies while having their futures in jeopardy. The students are frightened and hurt, yet they won’t let Trump’s threats dampen their aspirations. They are making connections with colleges and universities throughout the state to counter this assault. Our club is focusing on organizational and leadership training, and building unity with local activist groups, including the Freedom Socialist Party, unions and community people. 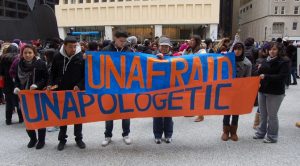 What these students want is legalization and a path to citizenship for themselves and their families within a reasonable period of time and at a feasible cost. They want to study abroad and travel to their countries of origin for family visits. They want financial aid, a social security card, and healthcare. They want to protect their families, feel safe in their neighborhoods and not be threatened by Immigration and Customs Enforcement (ICE), the police or white supremacists. Their goal is to be free to pursue their educations and careers, and to be of service to their communities.

In September, Trump announced rescinding the DACA program unless Congress passes a replacement by March 2018. In reality, he is using the DACA students as bargaining chips in order to obtain increased militarization of the border. This is outrageous! We must not ignore that historically, U.S. domestic and foreign policies under both Republicans and Democrats have exploited immigrants. They are used as cheap labor and scapegoats for the economic woes of this country. U.S. imperialist activities and wars are the root cause of migrations worldwide.

We need to stand with Dreamers and all immigrants to build a movement that can put an end to harassment, detentions and deportations. Unionists can play a big role by pressuring labor to become immigrant “protectors,” as UNITE HERE Local 11 in Los Angeles has done. It is training members “how to effectively stonewall ICE agents, emphasizing employees’ right to refuse to answer questions or show identification.” Unions are staging rallies and walkouts against Trump’s travel ban and immigrant detentions.

It is time to defy the cruel and inhumane actions of the U.S. profit-driven government, demand immediate unconditional legalization with full labor and civil rights for all immigrants, and call for opening the borders.

My student-comrades are ready to stop dreaming and begin living in a truly just and equitable society. Let’s help them get there.

Christine Browning is a retiree and a student-activist. She can be contacted at cmbearthling@att.net.