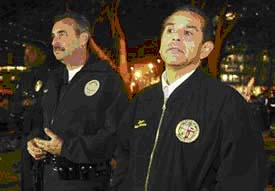 You Can Arrest an Idea

The bankers slept well. Their homes in Beverly Hills were not spotlighted by a noisy swarm of police helicopters, searchlights burning through the sanctity of the night, harassing the forlorn City Hall encampment of those who dared protest the banks’ seizure of our government. I live within sight of the iconic Los Angeles City Hall, and at first I thought it was being used once again as a movie location, given the massive police presence, as if an alien invasion was being thwarted.

Los Angeles Mayor Antonio Villaraigosa, right, and Police Chief Charlie Beck survey the park after members of Occupy Lose Angeles were successfully cleared out their camp by more than 1,400 police officers in riot gear at City Hall early Wednesday, Nov. 30, 2011.Not eager to test the resilience of my new heart valve, I hesitated until the first crack of dawn to visit the place where former Labor Secretary Robert Reich and I had spoken weeks before at a teach-in on the origins of the economic crisis. I described the scene back then as a Jeffersonian moment, exactly the kind of peaceful assembly to redress grievances that the Founders of our nation enshrined in the Bill of Rights. But at 5 a.m. Wednesday there was only a graveyard of democratic hope. The protesters were gone, 200 arrested for exercising their constitutional rights, and only the television crews stayed to pick over the carcass of tents, books and posters, including one I pulled from the debris that read “99% you can’t arrest an idea.” Actually, you can, and the bankers have, as a result, been able to reoccupy Los Angeles’ City Hall and every other contested outpost of power throughout the nation.

The liberal Democratic mayor, a past president of the Southern California ACLU, was pleased with the efficiency of the “community policing” approach of his police department. “I said that here in L.A. we’d chart a different path, and we did,” Antonio Villaraigosa boasted. However, the result was the same as elsewhere; the bankers were protected from the scorn they so richly deserve and there will no longer be a visible monument to the pain that they have caused. To ensure a pristine, amoral town square, huge concrete-anchored fences were quickly installed to prevent further access to the public space surrounding City Hall.

Of course the traditional cardboard encampments of the homeless three blocks away, a sprawling and constant feature of life in downtown Los Angeles, remained undisturbed. Sanitation and safety issues are of no concern as long as such manifestations of deep societal inequality are so far from the corridors of power as to be, in effect, invisible.

Such profound contradictions in the application of state power seemed not at all to bother the first wave of government workers arriving at the various local, state and federal office buildings. I lined up with some of the early birds at the employee entrance to City Hall—the closed public entrance had a forbidding police presence—and told the guard that I was there with a literary offering for the mayor, whom I have long known.

My gesture was quite pathetic. I brought him a copy of my book “The Great American Stickup,” which he had once claimed to have read and admired, to remind him that he should be arresting the real criminals rather than the victims of their financial swindles. For a confirmation of that point, I also intended to present the mayor with the transcript of U.S. District Judge Jed S. Rakoff’s ruling this week rejecting the sweetheart deal between the SEC and Citigroup. The settlement, one of dozens like it offered to the banks, would have let Citigroup off the hook for a pittance in fines in return for closing cases involving immense corruption on the part of the bankers, who would not have to admit guilt for their crimes.

And crimes they clearly are, far beyond the scope of pitching a tent in a public park. As Judge Rakoff stated, the Securities and Exchange Commission has charged Citigroup with “a substantial securities fraud” in the sale of a billion dollars’ worth of toxic securities that were designed to fail and which the bank had bet against. Rakoff, who has handled a number of these cases, complained that Citigroup, like the other major banks, is a recidivist. Citigroup had already paid fines for four similar scams. The judge observed that “although this would appear tantamount to an allegation of knowing and fraudulent intent, the SEC, for reasons of its own, chose to charge Citigroup only with negligence” despite the far more serious charges called for in securities law.

The failure of the SEC or any other government agency to hold the banks accountable provides the essential justification for citizen action of the sort the Occupy movement has offered. In his concluding summary, Rakoff stated: “Finally, in any case like this that touches on the transparency of financial markets whose gyrations have so depressed our economy and debilitated our lives, there is an overriding public interest in knowing the truth. In much of the world, propaganda reigns, and truth is confined to secretive, fearful whispers. Even in our nation, apologists for suppressing or obscuring the truth may always be found.”

Count the liberal mayor of Los Angeles, a man I have respected and voted for, as one of those apologists for suppressing truth in the name of civic order. As I meekly allowed myself to be ordered about by the police clearing the area so that the concrete barriers could be installed, I wondered whether I had not been reduced to the status of a fearful whisperer.