This morning on the nationally syndicated Stephanie Miller Show, a recent addition which now airs five days a week on my local Pacifica station KPFK 90.7FM in Los Angeles, in between her wall-to-wall anti-Trump coverage and vitriol, she reported on a story about a man whose penis was ossifying into a “bone-er”(as she put it). The short segment was replete with a cacauphony of crude humor, sound effects, gasps and guffaws from her several co-hosts, who, along with Miller, seem to be bringing an anomalous morning zoo miasma to the perpetually cash-strapped, listener-supported, 60 year-old, public radio outlet. Her normal 60 minute show was cut in half to air a fund-drive show replay in support of the Pacifica Radio Archives, perhaps one of the few legitimate remaining reasons to support the station.

However, fund-drive show replays, which is KPFK’s current and longstanding on-air fundraising model, present slippery slope questions about broadcast standards and ethics, especially when there is no disclaimer that the show is a repeat at the beginning of the show, and the hosts are requesting a specific amount of money from the listeners in a certain time period, with matching funds and updates about how much they’ve raised so far from the phone room, and offering premiums for donations and to announce donor’s names on-air, – all of which is false, deceptive and untrue, as the show is a replay from last week, last month or last year. KPFK’s fundraising model also often aligns itself with causes and organizations dedicated to serving the poor, oppressed and underprivileged, and equates support for the station as support for the suffering and oppressed peoples. This fundraising mantra rings hollow and begets ethical questions about the morality of turning human suffering into a profit center for the station, particularly when the station ignores the very poor, oppressed and underprivileged right down the street from its own studios.

The relentless replay-intensive fundrive programing also calls into question the station’s favorite motto, “Radio Powered By The People”. It might be more accurate to say, “Radio Powered By The Replay”, especially when you consider that one programer, Roy Tuckman, on his show, Somethings Happening, is given 30 hours per week to play decades-old replays four nights per week from midnight to 6AM. Tuckman is by all appearances a dedicated soldier for the Pacifica mission but it’s time to pass the torch, buddy. As valuable and popular as they may be, re-runs should take a back seat to live programing at a listener-supported, community radio station dedicated to giving a voice to the voiceless.

The next show up, Sojourner Truth, a locally produced show and one of the few prime-time shows at the station that does occasionally cover local politics & news, seemed to be live-hosted by the host Margaret Prescod however, it was not entirely clear if that was the case and the fund drive premium she was offering, a Daniel Sheehan Seminar on Russian collusion of the 2016 election, seemed to be at least several years old, judging from the outdated references about Trump/Putin collusion, Impeachment, etc, made by Sheehan in the short clips that Prescod played in between her audience-shaming fundraising tirades. That went on for an hour.

I’ve never worked in radio or studied broadcasting but I have been a daily listener to the medium for many years, and one absolute truth of broadcasting that I’ve discerned over that time period is this: Listeners should never be confused about whether or not programing is live or pre-recorded. KPFK management, curiously, doesn’t seem to share this belief.

At 8 AM it’s Democracy Now with Amy Goodman, another nationally syndicated show that began at Pacifica, the parent network of five stations founded by Hill, but now appears to be a wholly owned subsidiary of Amy Goodman. The show covers national and international news exclusively and predominantly presents legitimate alternative news narratives to those of the the mainstream media. However, now airing on over 1000 news outlets nationwide, it’s not clear why the show, or any other nationally syndicated show that broadcasts on hundreds of other outlets, needs to be on the financially-strapped, listener-sponsored, community radio station KPFK any longer if it’s costing the station more than it’s able to raise in donations and support to broadcast the show. Initially, KPFK and other Pacifica stations were the only place you could hear a show like Democracy Now. That’s no longer true. Pacifica was recently in debt to Democracy Now for several million dollars in unpaid broadcast fees. Pacifica currently also has a 3 million dollar loan it’s struggling to pay back that stems from a court case over back-rent owed by its New York station.

Pacifica leadership is also in turmoil again after the first permanent executive director of Pacifica since 2015, Maxie Jackson III, suddenly resigned last month after only nine months on the job. The interim executive director, and longtime KPFK local station board member, Grace Aaron, refuses to answer questions about the resignation of Jackson or provide even a generic explanation for the resignation.  Mr. Jackson is also not talking about his departure. KPFK’s local station board elections are also currently taking place and station management steadfastly refuses to adequately plan, publicize or promote the candidate forums to give listener-supporters an opportunity to engage with the station and fellow supporters, and to express concerns and ask questions of the candidates, on their own airwaves! Listeners have to go to YouTube to watch the pre-recorded debates that aren’t even recorded at the station and don’t include all the candidates.

KPFK shrouds its personnel changes, programing decisions, and board elections in obscurity. Their local news coverage is nearly non-existent. A preponderance of their prime-time programs are not produced locally with local hosts. Their replay-intensive fundraising model is toxic to listeners and raises serious concerns about the station’s broadcasting standards and ethics. Their listener marketshare is a decimal point. 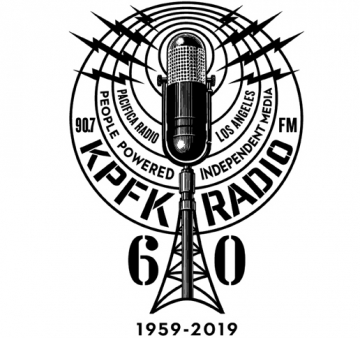 However,  they sure can produce one hell of a cool T-shirt and throw a great $250/plate party with Hollywood celebrities like Jack Black, Robby Kreiger, & John Densmore. KPFK management seems married to the notion that the promotion of pop-culture celebrities is more important than fulfilling the Pacifica mission. Shepard Fairey, a popular counter-culture street artist, recently redesigned the station’s logo and gets more promotional airtime on KPFK than the thousands upon thousands of homeless people camped out in tents and cardboard boxes throughout southern California in the station’s signal area. Voice of the voiceless, indeed.

KPFK appears to function now as merely a fundraising cash-cow for the nationally syndicated “community” and a small cadre of entertainment and industry executives and celebrities, who wax poetic on-air about the importance of the station, independent media, the Pacifica network, and the “mission”, while at the same time conspicuously ignoring the dismal reality of the station’s perpetual mismanagement and chronic failure at fulfilling its mission, which is often quoted as being- “the voice of the voiceless”. Try to find a prime-time KPFK story on homelessness in Los Angeles, or a recent interview with a local politician or community leader, or any regular coverage of a local, city, county, regional or state municipal or community meeting. Good luck. Homelessness is one of the biggest problems facing Los Angeles – and the nation – right now, but you wouldn’t know it from listening to KPFK. That’s a blatant, glaring, and unacceptable failure of the Pacifica mission.

At a recent Pacifica National Board meeting it was also revealed that Pacifica has no formal written policy on underwriting, a common funding source for news outlets where a station, show or producer can receive money or compensation from a business, corporation or organization who wants to offer their financial support in exchange for promotional airtime. Underwriting is a hallmark of the NPR (National Public Radio) broadcast model. KPFK, especially during fund drives, bends over backwards to distinguish itself from NPR by emphasizing the lack of corporate influence at the station. However, while this may have been true at one time, it no longer appears to be the case.

The absence of corporate influence is the backbone of their reasoning as to why people should support the station and the station’s raison d’être. If KPFK show producers or management are receiving corporate underwriting support without disclosing it to their listeners, it would represent not only a gross violation of full disclosure of funding sources, but also a nearly irreparable breach of trust between the station and the listener regarding the integrity and veracity of their news and information, as well as an indictment against those responsible for perpetrating such fraudulent broadcasting and willful undermining of the mission of the station on the backs of the voiceless. At least with NPR, you know who calls the tune. With KPFK, it’s apparently anybody’s guess.

Desperate times call for desperate measures. Four hours of prime-time programming from 6AM – noon currently on KPFK, in the second largest radio market in the country,  are not broadcast live from its own studios. Two hours are hosted by hosts that are not even in California.

I’d like to recommend a new station policy for my local, listener-sponsored, community radio station KPFK, and perhaps Pacifica. It’s radical, but simple: If you can’t do you show live from the KPFK studios (or on a remote broadcast from elsewhere in So Cal), then you can’t have a show at the station. That’s my definition of “community radio”.

Lew Hill would most likely not recognize nor endorse the current state of his listener-sponsored radio station KPFK or his community radio network, Pacifica.