Opera: Thumbprint, 8-10p, REDCAT – Roy and Edna Disney/CalArts Theater, 631 W 2nd St, LA 90012. Tickets Available: http://www.laopera.org. An astonishing true story of courage and triumph, Thumbprint explores the family ties and tribal traditions that empowered Mukhtar Mai to become the first female victim of gang rape to bring her attackers to justice in Pakistan. In lieu of a financial settlement, she requested that a school be constructed to educate girls. She hoped to educate the young, to help prevent the humiliation of signing their names with only a thumbprint. The story is told through a dynamic score by Kamala Sankaram, filled with Hindustani and European opera influences, and a libretto by Susan Yankowitz, originating from a series of interviews with Mai. Thumbprint was commissioned and developed by Beth Morrison Projects and HERE, and premiered at the 2014 PROTOTYPE Festival. Thumbprint began as a song-cycle comissioned by Beth Morrison Projects for the 2009 21c Liederabend.

Women’s Ban The Bomb LA rally, 9-11a, Corner of Hollywood and Highland, http://www.womenbanthebomb.org/solidarity-events-around-world and http://www.icanw.org Bring banners and signs to help make people aware of the fact that over 130 nations came together to demand a treaty that would ban nuclear weapons forever. This historic treaty was proposed in March at the United Nations in NYC. httpss://www.facebook.com/events/319643991788636/

Action Workshop: Making Films That Serve Our Communities, 12n­5p, EPFC, 1200 N. Alvarado St, LA 90026. |Free –open to young filmmakers ages 19 -­ 25 with priority given to traditionally media-marginalized populations. Mainstream media one of the main tools the ruling elite use to divide, mislead and repress people’s movements for change. As filmmakers and activists, we need to create films that represent the aspirations of the community. What are ways we can ensure that we reflect their voices, demands, and resistance? How can we genuinely work with the people to create films that can support their struggle? Workshop-taught by filmmaker Hiyasmin Saturay-is open to filmmakers of all levels who are looking to make films for their communities or campaigns. Activities to learn and share interviewing and editing methods that involve the subjects of the film. Part of “ACTION! Cinema as Sanctuary” summer series. Support provided by Academy of Motion Picture Arts & Sciences. 213-484-8846, info@echoparkfilmcenter.org to sign up 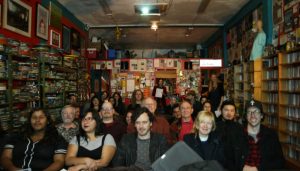 LA Anti-repression Movement conference call, 4-5p, initiated by Change Links, open to all working against police abuse and murder, mass incarceration, political imprisonment, surveillance and the criminalization of dissent and resistance, or for abolition or re-integration. Participants will identify themselves and their group(s), let others know of events planned in the coming month or two, and suggest additional participants. Dial-in Number: (515) 604-9702; Access Code: 290785. RSVP: changelinks2@gmail.com

Land is Power. Land is Liberation. Land is The Commons; Juneteenth 2017. Black people across the country will take back land and reclaim space, from vacant lots to empty school buildings, land that should be used for the good of the people; land that has historically been denied to Black people. Through these actions we confront the institutions and individuals built off the extracted wealth of Black people and Black land. http://www.BlackLandandLiberation.org, httpss://m4bl.net/

World Refugee Day Rally – LAX, 5-9:00p, Tom Bradley International @ LAX, LA 90045. World Refugee Day is dedicated to raising awareness to the plight of refugees throughout the world. This year, while refugees, immigrants, as well as people of color, Muslims, Jews, etc, continue to be attacked by the hateful rhetoric of the Trump Administration, it’s time to stand up for them! Please join us at LAX, the Tom Bradley Intl Terminal, downstairs. My email: jmriverspc@yahoo.com http://www.facebook.com/events/118940125360035/

‘Third Wednesday Spiked Lemonade Tasting’ 6th year in downtown Culver City! Look for balloons 5-9p to find participating businesses. Check in at any one to pick up your “Third Wednesday Passport” to one of summer’s hottest annual events — then get it stamped each time you cool off with a sample of ‘spiked’ lemonade (virgin options available for all ages). Make your way to the Kirk Douglas Theatre, enjoying live music in the streets along the way. There, you can turn in your passport to be entered in a raffle to win summertime prizes (no purchase necessary). FREE ADMISSION; http://www.downtownculvercity.com. 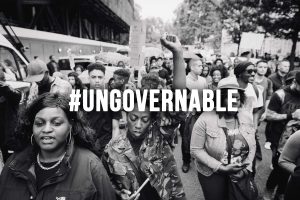 Sheriff Civilian Oversight Commission Meeting, 9:30a-12n, Metropolitan Water District of Southern California, 700 N Alameda St, LA 90012. Dignity and Power Now coalition against Sheriff violence invites you to attend and speak out. Town Hall Meetings in each district TBD. Information and agendas can be found: https://coc.lacounty.gov/ All are welcome to voice concerns and give public comment!

Lecture: Climate Change, the Sierra Nevada, and Our Water Future, 7-8:30p, Aquarium of the Pacific, 100 Aquarium Way, Long Beach 90802. Tickets Available: tickets.aquariumofpacific.org In the recent drought, we saw the consequences of hotter-than-normal temperatures and a smaller-than-normal Sierra Nevada snowpack, including low reservoir levels, dying trees, and increased wildfire risk. Prof Alex Hall of UCLA and his research team have set out to understand future impacts of climate change on the mountain landscapes we love—and the snowpack California depends on for its water. The UCLA team has produced first-of-their-kind projections of future climate that capture the intricate physical processes affecting climate in the Sierra. 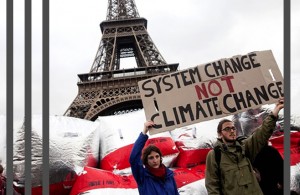 Paisanos Unidos: A Night By Mechistxs, 8 p, EPFC, 1200 N. Alvarado St, LA 90026. MEChA, Movimento Estudiantil Chicanx de Aztlan was part of a student movement founded to promote culture, history, traditions, and self identity. ‘Til this day we continue to keep a presence among college campuses all over the US and share beliefs through political movement, poetry, murals, music, and cinema! We welcome everyone for a night full of short films made by our fellow paisanos. 213-484-­8846, http://www.echoparkfilmcenter.org

LA Social Justice Education Movement conference call, 4-5p, initiated by Change Links, open to all students, teachers, parents and community members organizing against privatization, union busting and for education for liberation. Participants will identify themselves and their group(s), let others know of events planned in the coming month or two, and suggest additional participants. Dial-in Number: (515) 604-9702; Access Code: 290785. RSVP: changelinks2@gmail.com

Film: United in Anger: A History of ACT UP, 7:30p, free, Hammer Museum, 10899 Wilshire Blvd, LA 90024. Archival footage and insightful interviews chrionicle ACT UP (the AIDS Coalition to Unleash Power) and its incredibly effective actions, which forced the US government and mainstream media to face the AIDS crisis. Hammer People Power Series, exploring successful grassroots political movements around the world. 310-443-7000

I Present Two, 8 p, EPFC, 1200 N. Alvarado St, LA 90026. Stacy Elaine Dacheux and Shauna McGarry host I PRESENT TWO, a new series in which the night’s guest filmmakers then curate next month’s screening, creating an ongoing conversation between the film center, artists we admire, and our community about art-making. 213-484-8846 http://www.echoparkfilmcenter.org

Anniversary of the 1969 Stonewall Rebellion in NY, led by POC trans women, which launched the modern militant LGBTQ movement. 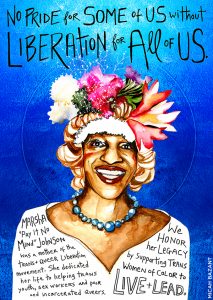 An Evening with Arundhati Roy: The Ministry of Utmost Happiness, In conversation with author Héctor Tobar 7:30p, will-call opens 6:30p. Aratani Theatre, 244 S. San Pedro St, LA 90012, Library Foundation-ALOUD, Co-presented with the JACCC and Scripps Presents series. Tickets $32-55, httpss://web.ovationtix.com/trs/pe.c/10158954.  20 years after her Booker Prize-winning novel The God of Small Things, Arundhati Roy returns to fiction with a dazzling new novel. The Ministry of Utmost Happiness journeys across India—from Old Delhi and the roads of the new city to the mountains and valleys of Kashmir and beyond, where war is peace and peace is war. Braiding together a cast of characters who have been broken by the world they live in and then rescued, and patched together by acts of love and hope, Roy reinvents what a novel can be. Reading from this novel and discussing her body of work that includes nonfiction such as Field Notes on Democracy and Things That Can and Cannot Be Said, Roy joins novelist and former LA Times columnist Héctor Tobar for a special evening of storytelling. Each ticket includes a copy of The Ministry of Utmost Happiness, which will be distributed before the program.

The Very Eye Of Night And Other Short Films by Maya Deren, 8 p, EPFC, 1200 N. Alvarado St, LA 90026. 6 shorts by legendary Maya Deren. “From the early 1940s until her death in 1961, Maya Deren evoked and exemplified the America avant-­garde movement. Her first film, Meshes of the Afternoon, set the tone for the decade and linked the movement to the older European avant-garde films of Cocteau and Buñuel.” -­ Cecile Starr. 213-484-­8846 http://www.echoparkfilmcenter.org

If you enjoyed this post, please consider leaving a comment or subscribing to the RSS feed to have future articles delivered to your feed reader.
By Change-Links|2017-06-15T23:29:07-05:00June 5th, 2016|Uncategorized|0 Comments