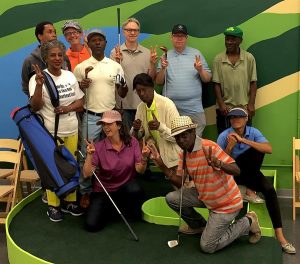 LA Poverty Department in “The Back 9”

From June 1-25, LA  hosts the Hollywood Fringe. Thousands of performers present over 357 shows covering the whole spectrum of the arts. http://www.hollywoodfringe.org

June 5-10: US Campaign for Palestinian Rights – Enough! Join Week of Action 50 actions on 50th anniversary to demand an end to Israel’s brutal military occupation as part of a commitment to justice for all Palestinians, whether in historic Palestine or in exile. Israel’s actions since 1967 make clear that the occupation was never meant to be temporary. It is the latest extension of Israel’s ethnic cleansing and subjugation of Palestinians, which continues to this day. httpss://uscpr.org/campaigns/50actions/

Thru Sept. 7: LAUNCH: An Exhibition of Works Selected by Sergio Teran, 57 works selected out of 253 submissions, representing the LA Valley College Art Department; all the works included were produced during the 2016-17 academic year. Featuring a wide range of media and technique, for many students in the exhibition this is their first opportunity to have their work recognized on a professional platform. Exhibition sponsors Carter Sexton Artist Materials. Sergio Teran is a contemporary Mexican/American Artist born 1974 in LA. In 1999, Teran graduated from the Art Center College of Design where he received a BFA in Illustration/Fine Arts. In 2000, Teran attended NYU where he received a graduate degree in Studio Art and Painting (2002). Info: http://www.lavc.edu/arts/artgallery.aspx

Revolution Club LA: Future People Open Mic. 7-10p, 2716 S Vermont Ave #8, LA 90007. The Trump/Pence Regime is Fascist and they have their hands on power. Theme of this month’s open mic NO Fascists in the White House! Share your art, poetry, music in the spirit of resistance against this Fascist Regime!  facebook.com/events/1862169484108261/

Terms and Conditions May Apply–Whittier 1st Thurs Movie Night, 7-9p, St. Matthias Episcopal Church, 7056 Washington Av, Whittier 90602. Park on Washington (additional parking behind church). N/E corner of Wardman St. & Washington Ave.  Washington Ave (not Blvd) runs north and south two short blocks east of Greenleaf. Walk through the second gate n. of Wardman.  Every day, billion-dollar corporations learn more about your interests, friends and family, finances, and secrets… and are selling the info to the highest bidder, and sharing it with the government. Filmmaker Cullen Hoback exposes what governments and corporations are legally taking from you. Exposé demonstrates how we opted-in to a real-time surveillance state, click by click- and what can be done about it. Whittier Peace & Justice Coalition. 562-587-6270, 562-233-8579,  http://www.whittierpeace.org 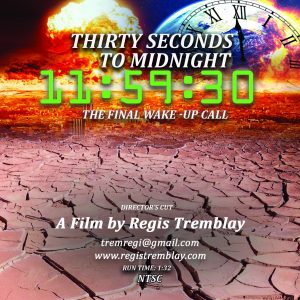 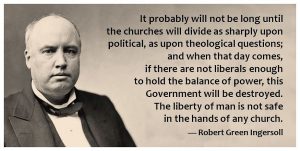 INGERSOLL SPEAKS! 1-man show with Ernest Kearney, 5:30p, $12 (see offer), ASYLUM@STUDIO C, 6448 Santa Monica Blvd.(west of Vine). Tix: https://hff17.com/4615 Enter the code “Changelinks” when prompted for discount price of $8. Ingersoll campaigned for Negro equality, supported the right of women to vote, opposed capital punishment and inspired the U.N. and the birth control pill. His lectures attracted audiences in the tens of thousands, and before the advent of ?lm and radio he was seen and heard by more Americans than any man in our history. He was also the most outspoken foe of religion this country has ever known, and the father of the US Golden Age of Freethought. At the conclusion of each performance he plans to distribute to those attending books by writers referenced during the course of the show as having been treasured by Ingersoll: Shakespeare, Darwin, Montaigne, Thomas Paine and of course, Robert Burns. In every volume will be a bookmark encouraging audience members to learn more about Ingersoll and theFree Thought movement in the US. 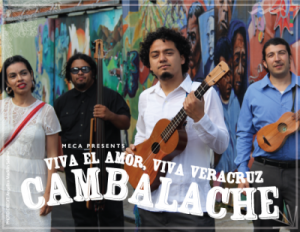 Oiltowns: A Documentary by Mark Street, 8p, Echo Park Film Center(EPFC), 1200 N. Alvarado St, LA 90026. Oiltowns traces boom and bust cycles in and around Williston, North Dakota. Interviews with oil workers, residents, ranchers and homeless focus on changes that have animated the small town. Offers a microscopic view of unbridled capitalism in which expectations are exceeded and dashed. In the Bakken formation, discovery and extraction of oil brings unexpected consequences and environmental blight. http://www.markstreetfilms.com  Filmmaker in attendance! 213-484­8846  http://www.echoparkfilmcenter.org

Free Red Fawn Silent Auction Fundraiser, 2-6p, Self Help Graphics & Art, 1300 E 1st St, LA 90033. Red Fawn is a human rights advocate, organizer, and community leader in the Oglala Lakota Sioux. She was raised in traditional Lakota ways, grounded with love and deep connection to the earth and all living things. Red Fawn was arrested at Standing Rock on Oct. 27, while serving as a trained medic, helping those hit by tear gas and rubber bullets. Her bail is  $110,000 and she faces 20 years in prison. 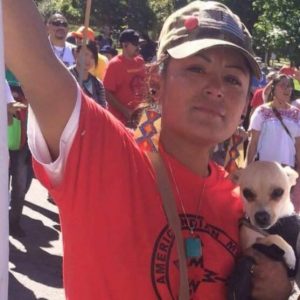 LA Peace/Anti-War Movement conference call, 4-5p, initiated by Change Links, open to all who oppose US intervention, war-making and invasions, conscription or militarization of the border, the schools, and policing. Participants will identify themselves and their group(s), let others know of events planned in the coming month or two, and suggest additional participants. Dial-in Number: (515) 604-9702; Access Code: 290785. RSVP: changelinks2@gmail.com

Film: Changing the World, One Wall at a Time, 6 -8p, Raleigh Studios, 5300 Melrose Av, LA 90004, tickets, http://www.eventbrite.com. Documentary feature on Education Is Not A Crime – one of the world’s largest street art and human rights campaigns, which raises awareness about education apartheid by Iran’s government against tens of thousands of Baha’is in the country. Changing the World, One Wall at a Time features interviews with popular artists – such as Marthalicia Matarrita from NY, and Elle Riechers from LA – as well as activists with the Civil Rights movement, the anti-Apartheid struggle in South Africa, and human rights work on behalf of Iranians of all backgrounds. http://www.facebook.com/events/437126196645471/ 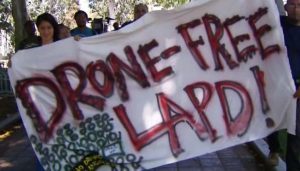 When the FBI Investigates the White House, Tim Weiner, Lecture and Q&A, 7:15p, Mark Taper Auditorium-Central Library, 5th & Flower, DTLA. Event is full, standby only. Live-streamed: http://www.youtube.com/watch?v=LZLsILWSYV4 Since J. Edgar Hoover died, 6 weeks before Watergate, the FBI has had to confront presidents. FBI investigations led to Nixon’s resignation, indictments of Reagan’s national-security team, and the impeachment of Bill Clinton. Now the current administration faces a major counterintelligence case. Tim Weiner, winner of Pulitzer Prize, National Book Award, and LA Times Book Prize for his work on US intelligence and national security, addresses these confrontations and the challenges they pose.

What Can the Ancient World Teach Us About Globalization? A Zócalo/Getty Villa “Open Art” Event, Moderated by Laura Trevelyan, Anchor, BBC World News America; 7:30p, Getty Villa, Fleischman Theater, 17985 PCH, LA 90272, This program will be outdoors. Admission limited to guests who have registered in advance. Guests driving to the event must park on-site. Parking is $10; main gate will open at 6p to ticketed guests only. The backlash against globalization raises questions. What does greater connectedness across borders mean for our jobs, our national identities, and our governments? These are not new concerns. The ancient Greek and Roman worlds saw increasing flows of objects, people, and ideas that created a broader international consciousness—and no small amount of turmoil. How did the ancients respond to these phenomena? NYU classics scholar Roger Bagnall, UCSB global studies scholar Jan Nederveen Pieterse, and Stanford classical philologist Grant Parker visit Zócalo to reckon with timeless questions. http://www.zocalopublicsquare.org/event/can-ancient-world-teach-us-globalization/

Forgotten VHS: Letters From The Park, 8 p, EPFC,1200 N. Alvarado St, LA 90026. In memory of great Colombian writer we dust off copies of the “Gabriel Garcia Marquez Collection.” Cuban filmmaker Tomas Gutierrez Alea adapts elements of Love In the Time of Cholera in this Cyrano De Bergerac type tale of two young lovers who enlist the help of the local post to write passionate letters to each other. Shown on glorious VHS.213-484-­8846 http://www.echoparkfilmcenter.org

Health Care for All-LA Chapter:  The “HEALTHCARE MOVIE” 8:30p, mtg 7:30p .Free. Peace Center, 3916 S. Sepulveda Blvd. CC 90230. Entrance & Free parking in rear. In 1964 Canada and the US had similar health care systems. Canada evolved into a universal “Medicare for All” system costing less, covering everyone with better health outcomes. US adopted “Medicare for some,” devolving into a Wall Street profit instrument costing more, leaving people behind, creating crushing medical debt and resulting in some of the worst health outcomes in the advanced economy world. What can we do? Join us to find out!  Light refreshments. Info 310-459-9763 mcruised@aol.com.  http://www.healthcareforall.org  http://www.facebook.com/HealthCareForAllCA 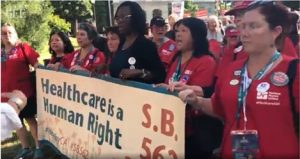 Film: Charlie Vs. Goliath, 7:30p, Barnsdall Gallery Theatre. TICKETS: https://charlieatbarnsdall.bpt.me/ The Barnsdall Gallery Theatre, 4800 Hollywood Blvd., LA 90027. Wyoming political documentary ‘Charlie vs Goliath’ screening in Hollywood. Former Catholic priest Charlie Hardy is 75 years old and has no money or political experience. But none of that dissuades this 21st-century Don Quixote from running for the US Senate in his home state of Wyoming. Charlie’s courage to take a principled stand against money in politics attracts a ragtag group of young volunteers. http://www.facebook.com/charlievsgoliath/posts/1394960830540507

Blue is, perhaps, the most poignant color. From Picasso’s Blue Period to Tennessee Williams’ “blue roses” to the Mississippi Delta Blues, the fifth hue on Newton’s color wheel has come to convey depth, sadness, and yearning. What relationships exist between the history of blue pigments—ancient lapis lazuli, biblical tekhelet, and rare indigo—and the meanings the term conveys today? Author of Indigo: In Search of the Color that Seduced the World Catherine E. McKinley, art historian and author of Blue Mythologies: Reflections on a Colour Carol Mavor, OSU chemist and discoverer of “YInMn blue” Mas Subramanian, and Saturday Night Live original cast member and blues and comedy club owner Garrett Morris visit Zócalo to explore the color blue. http://www.zocalopublicsquare.org/event/what-does-blue-mean/

Ed Act Now monthly Meeting, 2-4p, The Clubhouse 1607 N. Vermont Av., LA, Storefront location, right by Hollywood & Vermont. Plenty of free parking. Ed Act Now is a group of educators and media professionals focusing on resisting the Trump administration and promoting Progressive Education policy, through political action and targeted media. We’re meeting to discuss priorities and action items for the summer. We care about education, advancing progressive goals, resisting the Trump Administration, and a firm belief that if we lose on education, we lose Everything!  We need to reflect and reassess where we should put our efforts going forward. go.ourrevolution.com/page/event/detail/volunteeractivityormeeting/gpgmzq

Gay Pride Parade has converted to an epic, peaceful human rights march, 8a, Hollywood & Highland, site of the 1st LA Pride Parade in 1970. Hollywood Blvd closed between La Brea and Highland. Meeting a group?  Pick a spot to meet your friends that will be easily found and recognized. http://www.resistmarch.org 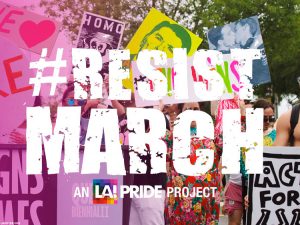 LA Environmental Movement conference call, 4-5p, initiated by Change Links, open to all protectors of the air, water, soil, forests, animals and seeds, and opponents of climate denialism and environmental racism, injustice and degradation. Participants will identify themselves and their group(s), let others know of events planned in the coming month or two, and suggest additional participants. Dial-in Number: (515) 604-9702; Access Code: 290785. RSVP: changelinks2@gmail.com

Film: NORTH BY EL NORTE (2016, 90 min) 4p preshow, 5p film, Unurban Cafe, 3301 Pico Blvd, Santa Monica 90401, 310-315-0056. Director Mark Christensen in person. If you take an ex-con and give him the opportunity to a voice, he would say “I always wanted to build a wall to keep the Americas out.” An engaging story that affects us all in Mexico and the US. Danny Trejo raises the idea the wall can be challenged and overcome by perseverance, love and determination. With Douglas Spain, Patricia Rea, Emilio Rivera. Hear Mark Christensen interview by Gerry Fialka httpss://archive.org/details/20150914markchristensen.

501(c)onference: Creating CommUNITY Out of Chaos, 9a-5p, also Wed Jun 14, Center for Nonprofit Management, 1000 N Alameda, Suite 250, LA 90012. Tickets Available: http://www.cvent.com, This year, against the backdrop of uncertainty and dizzying levels of change, it’s more important than ever to come together and share bold new solutions! The Center for Nonprofit Management’s annual 501(c)onference is the only nonprofit sector conference of its kind in Southern California, bringing together nearly 400 nonprofit, philanthropic, and civic leaders to share knowledge and connect with others. http://www.facebook.com/events/404434593243926/ 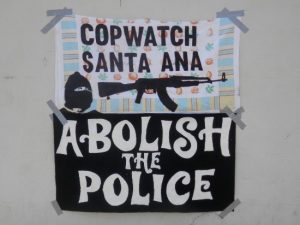 Jason Chu, spoken word, 4p, Alma Reaves Woods – Watts Branch Library, 10205 Compton Ave, LA 90002. Join us for our family fun Reading by Design summer kick-off! Jason Chu (artist/poet/activist) is coming to Watts to share his stories through spoken word. Witness his creativity expressed through lyrical music, which he uses as a gateway to reach people and stand up for what he believes in. 323-789-2850

If you enjoyed this post, please consider leaving a comment or subscribing to the RSS feed to have future articles delivered to your feed reader.
By Change-Links|2017-06-07T19:41:17-05:00May 27th, 2017|Calendar, Events, Movements|0 Comments