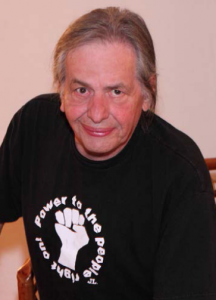 John Johnson, publisher and editor of Change-Links newspaper, passed away April 13, 2014 while preparing the May issue of a newspaper loved and relied upon by thousands of progressive political activists in Los Angeles and southern California. He would have turned 70 on July 4, 2014. John was in his 21st year with Change-Links, most as publisher.

Founded as a result of the Winds of Change conference held in Los Angeles in 1992, Change-Links came out first as a calendar of progressive and politically left events in the Los Angeles area. The goal was to inform people of where and when these events were taking place so they could attend, and also to help progressive organizations and movements schedule meetings and events to minimize time and date conflicts with each other. Articles were added later. The paper was distributed for free at over 100 locations in Los Angeles and Orange counties, including by supporters who distributed copies at events and directly to people they came in contact with. The paper was paid for by subscriptions and donations. A group of people who helped John prepare and distribute Change-Links will continue the newspaper.

The name, Change-Links, came from the idea that this newspaper could help link all progressive groups together, and that the sum of all their efforts would be greater than each of its parts to help build a larger and more united movement for social, political, and economic change. All of the groups, regardless of their specific issues and differences, were all working to create a society based on peace, social and political justice, and an end to war, economic exploitation, racism, and all other forms of discrimination. This required a non-sectarian approach to progressive politics, the idea that a diversity of ideas and strategies was good.

John Johnson embodied that spirit, and it was reflected each month in the pages of Change-Links. A look at the Calendar section, which took 5 pages of the 8 page paper, showed a broad range of organizations, meetings, and events. Articles were written by leaders of many of these diverse movements. John also published articles by wellknown national writers and political leaders, including Naomi Klein, Michael Parenti, Barbara Ehrenreich, Chris Hedges, Laura Flanders, and Ralph Nader, to name only a few, and by organizations and activists representing the Occupy Wall Street movement, the Black and Latino liberation movements, labor, women, LGBT activists, prisoners, poor people, the homeless, Iraqi’s and others.

John’s life prepared him for Change-Links. Born in North Hollywood in 1944 to a liberal Democratic family, John took his family’s basic teachings of fairness and justice to a new level. He came of age during the civil rights, anti-war, and student movements of the 1960’s and joined in the mid-1960’s what would become the largest radical progressive youth organization of that era, Students for a Democratic Society (SDS). John continued SDS’s sharp criticism of the abuses of giant corporations, banks, war-makers, and their enablers in government and right-wing organizations in the pages of Change-Links. Every issue since the 2008 crashing of the economy had articles exposing the growing control of the economy, politics and our very lives by a wealthy corporate right-wing elite that has helped make millionaires billionaires, and created more suffering for many millions of people here and around the world. When others were accommodating the increasing attacks on people’s living standards and rights by Wall Street and the political right, hoping to stay under their radar screen, John Johnson fearlessly exposed the corporate criminals and urged building a stronger political movement to fight them. His T-shirt expressed his politics: “All Power to the People. Right On!”

The sentiments expressed at John Johnson’s memorial were moving and inspiring. Many were made by those present; others were read from those who couldn’t attend. Others have come in since They not only pay tribute to a man dedicated to building a strong progressive movement, but also to man who cared about people.

Theresa and Blaise Bonpane, long-time leaders of Office of the Americas and the Peace Center, said, “John was a tireless warrior for justice, solidarity and peace. We hope that many will rise and continue his work. John Johnson, Presente!”

Michael Novick, a leader of Anti-Racist Action, said, “I worked with John, Don White and others in the Winds of Change Conference Coalition, out of which Change-Links emerged, the only really successful outcome due entirely to John’s commitment, diligence and persistence.”

Dr. Ruth Strauss said, “I was shocked and saddened to get this news. I talked to him several times during the time he was hospitalized and was so hopeful that he would get a new lease on life. What a loss to us all, but what an inspiration.”

Clay Claiborne, producer of the film, “Vietnam: American Holocaust,” said the monthly calendar of events “provided much of the glue that held the progressive community in Los Angeles together for the past 20 years…(the calendar section) covered all the upcoming programs, meetings, film showings and scheduled demonstrations. It was like a program for the movement.” Clay, a computer technician, would repair John’s computers in exchange for running advertising in Change-Links for Clay’s services and projects. “Once, when John was picking up a fixed computer from my place, he found out that my bike had been stolen. The next day he drove to Venice from the Valley to bring me an ‘extra’ bike he had.”

Oly Mogollon said, “John, where ever you are in that unknown eternal place, you must know that we loved you very much. I admired you highly as a great and dedicated conscious progressive human being. My deepest condolences to all John’s family.”

Jim DeMaegt, a fellow member of SDS with John in the 1960’s said, “I cried when I read this news. We all loved John Johnson. We all miss you greatly, John, and you will always be with us in our hearts.”

Kathleen Wang said, “John was someone I always saw whenever some issue needed support.”

Greg Foisie, a distributer of Change-Links on the west side of Los Angeles, said, “I found the educational and encouraging aspects of Change-Links to be very powerful, and I came to realize these qualities in the paper were reflections of who John was as a person. When I went to proprietors and asked them if they would provide space to allow their customers to pick up Change-Links, all I had to do was explain the nature of the paper and the services the paper provided. It was an easy sell. I was dropping off Change-Links to fifty locations in Venice and Santa Monica. Change-Links was John’s gift to the world.”

Frank Dorrel, publisher of “Addicted to War” and organizer of the movement’s on-line calendar of events, said, “Rallies, protests, talks, screenings, actions, and meetings of all kinds were covered by John. I usually took out a big ad for events that I organized. John was such an important part of the Anti-War and Justice Movement in the Los Angeles area.”

Chuck Anderson, who attended mailing meetings for many years and distributed Change-Links in Orange County, said “John was an icon in our left community and will be missed by all. John was a real comrade.”

Muffy Sunde, Los Angeles Branch organizer of the Freedom Socialist Party, said, “Please convey our sorrow and sympathy to John’s family. He meant a lot to those of us who depended on him to help build the movement. I remember once when we had not sent in notices for our monthly meetings or events, he called me to see if we were OK.”

Gerard Ungerman, a filmmaker at Free Will Productions, said “John was a good friend and an inspiration always. I pray that the new, upcoming generation of activists will be as dedicated and powerful, if not more. With love and respect.”

Sally Marr and Peter Dudar, makers of the film “Arlington West,” said “John was the hero among so many heroes. Without John, many activists and their events would have been ignored or lost. He never stopped helping and supporting our projects. When we had some money, he charged us little. When we had none, he gave it to us gratis. Change-Links was an amazing force. John will always be remembered for the love of his community. We are privileged to have known him. Viva John! Gracias with all our love.”

Lee Siu Hin, national coordinator of the National Immigrant Solidarity Network based in Los Angeles, expressed condolences and said, “John was working with us on creating Action LA and many other projects for the past 15 years. We’ll remember him!”

If you enjoyed this post, please consider leaving a comment or subscribing to the RSS feed to have future articles delivered to your feed reader.
By John Johnson|2015-11-01T16:24:25-05:00August 16th, 2014|In Memoriam, John Johnson, Paul Krehbiel|0 Comments