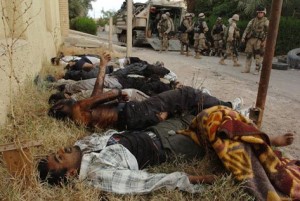 1 Million Dead in Iraq? 6 Reasons the Media Hide the True Human Toll of War — And Why We Let Them

Most Americans turn a blind eye to the violent acts being carried out in their name.

As the U.S. war in Iraq winds down, we are entering a familiar phase, the season of forgetting—forgetting the harsh realities of the war. Mostly we forget the victims of the war, the Iraqi civilians whose lives and society have been devastated by eight years of armed conflict. The act of forgetting is a social and political act, abetted by the American news media. Throughout the war, but especially now, the minimal news we get from Iraq consistently devalues the death toll of Iraqi civilians.

Why? A number of reasons are at work in this persistent evasion of reality. But forgetting has consequences, especially as it braces the obstinate right-wing narrative of “victory” in the Iraq war. If we forget, we learn nothing.

I’ve puzzled over this habit of reaching for the lowest possible estimates of the number of Iraqis who died unnecessarily since March 2003. The habit is now deeply entrenched. Over a period of about two weeks in May, I encountered in major news media three separate references to the number of people who had died in the Iraq war. Anderson Cooper, on his CNN show, Steven Lee Myers in the New York Times Magazine and Brian MacQuarrie in the Boston Globe all pegged the number in the tens of thousands, sometimes adding “at least.” But the number that sticks is this “tens of thousands.”

Cooper, Myers and MacQuarrie—all skillful reporters—are scarcely alone. It’s very rare to hear anything approximating the likely death toll, which is well into the hundreds of thousands, possibly more than one million. It‘s a textbook case of how opinion gatekeepers reinforce each other’s caution. Because the number of civilians killed in a U.S. war is so morally fraught, the news media, academics and political leaders tend to gravitate toward the figure (if mentioned at all) that is least disturbing.

The “tens of thousands” mantra is peculiar because even the most conservative calculation—that provided by Iraq Body Count, a British NGO—is now more than 100,000, and IBC acknowledges that their number is probably about half correct. They count only civilians killed by violence who are named in English-language news and some morgue counts. Their method is incomplete for a number of reasons—news media coverage is far from comprehensive, most obviously—and many Iraqis who are killed are not labeled by authorities as civilians. The death toll from nonviolent deaths (women dying in childbirth, for example, because the health care system has been devastated by the war) is also very high and is not included in IBC’s tally.

The more accurate figures come from household surveys and other methods, and these have much higher figures. I commissioned one conducted by Johns Hopkins scientists in 2006 that yielded a figure of 650,000, which was hotly disputed, but another around the same time yielded a total of more than 400,000 dead, including all Iraqis from all causes. Both surveys followed state-of-the-art epidemiological practice. And a lot of killing was still to come after those surveys were done.

There is a lively debate among specialists about these figures, but the bottom line is that “hundreds of thousands” rather than “tens of thousands” is the incontrovertible mortality statistic.

So why the devotion to the lower number? And why does it matter?

The latter question is the easier one to answer. Make the rounds of right-wing blogs and think tanks and you’ll find a constant refrain: the war, despite its many difficulties, was worth it to get rid of Saddam Hussein. As Richard Miniter of the Hudson Institute put it last September, “The death tolls in the Saddam years were far higher than in the years following liberation; hundreds of thousands disappeared into mass graves.“

Such a comparison is only possible if mere “tens of thousands” perished in the war. If the human costs are calculated to be relatively low, then the next war is all the easier to start.

But what the right-wing triumphalists assert does not explain why the elite media bury the mortality issue. A half-dozen reasons explain their indifference to accurate reporting.

First, many of these news outlets had endorsed the war and never quite recanted. Even if a newspaper did admit to a mistake in judgment about the war, acknowledging that you’ve been hoodwinked by the Bush administration and then seeing that error magnified by 5 million refugees and perhaps a million dead is a hard pill to swallow.

Second, the Bush White House worked overtime to decry any of the high estimates, and the Murdoch media machine did its part in attempting to discredit the household surveys in particular. The reaction to the Johns Hopkins estimate of 650,000 “excess deaths” came in for savage treatment, trashed as a “political hit” in Murdoch’s Wall Street Journal. This campaign against the scientists had a chilling effect.

Third, journalists have rarely if ever engaged the technical debate about estimating casualties, preferring to report mortality—if at all—as a political story. The science is complicated, to be sure, but accessible. The epidemiologists who are thoroughly conversant with the most advanced techniques of estimating fatalities come down squarely on the side of the household surveys and the higher numbers.

Journalism in the Iraq war tended to focus on the Bush administration’s foibles and the chaotic political wrangling in Baghdad. The attention to civilians and the violence of the war quickly fell into a few reliable tropes: the Shia-Sunni fratricide, spectacular car bombs rather than the quotidian reality of violence, Baghdad-centric reporting (because it was too dangerous to travel), and any glimpse of progress on the ground. While Iraqis were reporting (through blogs and polling) that 80 percent of the violence was due to the U.S. military and the conditions of life were intolerable, this perspective rarely found its way into major news media in the United States.

Fourth, the political establishment, including the Democratic leadership, would not touch this issue, and the news media was left without an opposition voice. The implication of so many deaths, a large fraction by the hands of U.S. soldiers, was politically a third rail. For many reasons—not least the hunger for heroes in the aftermath of 9/11—the troops have been accorded nearly unprecedented adulation, and such heroes cannot be accused of excessive use of force. So politicians have steered clear, and the rare one who did raise a question, such as the late, pro-military congressman John Murtha, were mercilessly attacked.

Fifth is the troubling matter of racism. The major U.S. wars since 1945 have been waged in Asia, and a certain “orientalism”—not unique to Americans, of course—has framed our perceptions of the local populations. How much a factor this is in ignoring the suffering of these populations is very difficult to gauge (about 1.5 million Korean civilians were killed in the Korean war, and between one and two million Vietnamese, and hundreds of thousands of Cambodians, in America’s Indochina war, all largely disregarded). But racism surely accounts for some of the cavalier disrespect the public and press show toward the civilian suffering in Iraq and Afghanistan.

The sixth and last explanation for indifference—and perhaps the most powerful—is a psychological one. We tend to avert our eyes from gruesome spectacle; it disrupts our sense of an orderly, just world. We want to believe that the mayhem is not happening, that in the end everything will be all right, or that the victims are to blame. These kinds of reactions—demonstrated time and again in clinical experiments by social psychologists—are reflected in society and also in the news media.

The Korean war is often called the “forgotten war”; it is not literally forgotten, but avoided. The enormous destruction without a clear and satisfying result for America led rapidly to public indifference. That, I think, is what’s occurred in Iraq—a falsely premised war with enormous devastation leads to a vast carelessness. And the civilians, the real victims, are the most disregarded of all.

Contrast the news coverage of Iraq with the summer 2006 war in Lebanon, when Israel bombed neighborhoods in Beirut that resulted in more than 1,000 Lebanese deaths in the 34-day conflict. However laudable the extensive news interest in that toll, such attention was significantly greater than the coverage of civilian killings in Iraq, which approached that figure in any single day that bloody summer. Why attention to one and not the other? A plausible explanation is that the Lebanon war was not a U.S. operation. We were not responsible (directly), and hence discussing the human toll was not out-of-bounds.

“When the New Republic ran a column by a private that recounted several instances of bad behavior by U.S. soldiers,” media critic Michael Massing recalled, writing about Iraq, “he and the magazine were viciously attacked by conservative bloggers. Most Americans simply do not want to know too much about the acts being carried out in their name, and this serves as a powerful deterrent to editors and producers.”

And there’s the rub. We simply don’t want to know: it’s too upsetting, too much to absorb. This is not behavior limited to journalists; many academics and NGOs who should know better do the same thing. Because they generally sympathize with the downtrodden of the third world, their indifference is all the more disquieting.

But the major news media enjoy influence that few institutions possess, and with that have a responsibility to be more comprehensive, more energetic, in getting and presenting the full scope of war. Missing the WMD story before the war has been the focus of press criticism. But the bigger failure—the more consequential failure—is neglecting the fate of the people subjected to the U.S. occupation. And once all the American troops are withdrawn, the season of forgetting will be in full flower.

John Tirman is executive director of MIT’s Center for International Studies. His new book, “The Deaths of Others: The Fate of Civilians in America’s Wars,” was released July 7, 2011 by Oxford Press.

If you enjoyed this post, please consider leaving a comment or subscribing to the RSS feed to have future articles delivered to your feed reader.
By John Johnson|2011-08-01T14:04:16-05:00August 1st, 2011|Commentary, Editorial, Iraq, National Security, Obama, Peace and War, United States|1 Comment