As part of the International Women’ Strike (IWS) which took place in over 50 countries around the world, in Los Angeles up to 1000 women, men and children gathered in front of the downtown Federal Building on Los Angeles Street between 3 and 7pm to protest against violence, poverty, discrimination, exploitation, war, the destruction of the environment . . . and for a caring society, for a feminism of the 99%.  Everywhere you looked you saw a sea of women wearing red, with homemade signs ranging from ‘’We are the Resistance’ to ‘Our Rights are Not Up for Grabs’  to ‘No  Separation of Families, No Deportations’ to ‘Labor Rights and a Living Wage for All Workers Including Mothers and Caregivers”.   Prior to the start of the event, participants made beautiful art, drawings and slogans on the street in front of the Federal Building.

Los Angeles sits on Native American Tongva land, and the event opened with words and a prayer by Gloria Arellanes, a Tongva elder.

A broad range of LA communities were represented in the planning of the event and as participants and speakers.

The event MCs were a multi-racial mix: anti-poverty campaigner Nancy Berlin of Alexandria House; Felicia Montez, founder of Mujeres de Maiz;  Margaret Prescod, Women of Color in the Global Women’s Strike and host of Sojourner Truth on Pacifica Radio including KPFK; and Ivy Quicho, national chair of AF3IRM.  They all participated in welcoming the crowd and in the reading of the International Women’s Strike Manifesto (attached) as well as the IWS/US Platform httpss://www.womenstrikeus.org/our-platform/. 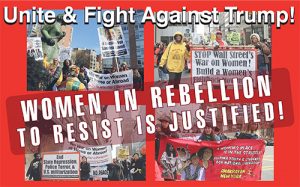 Speakers included: Black Lives Matter/LA, Black Women for Wellness, Veterans for Peace, Hunger Action LA, Every Case Matters, AF3IRM, Global Women’s Strike/LA, Feminist Majority, Gabriela LA, the Women’s March/LA Foundation, Black Alliance for Just Immigration, Military Families Speak Out, the International Action Center, ANSWER coalition, 350.org  and more.  Jackie Goldberg, the first openly-lesbian LA City Council member, former President of the LA Unified School Board and former California Assemblywoman, had the crowd fired up as she said, ‘We don’t want to live in the past, we refuse to go back,’ and listed many reasons why; she also noted ‘No woman is out of work, we may be out of paid employment but we are all working’.

Dolores Huerta, co-founder of the United Farm Workers and lifelong activist, urged women to use our own voices, and to divest from the Bank of America, Wells Fargo and other banks which invest in the Dakota Access Pipeline.

We also celebrated with music by the Miracle Dolls, Megan Foranda, and Sheila Nichols, and moving poetry by Sabreen Adeeba, DCFS Give Us Back Our Children, and student Hannah Harris of the Get Lit Players.

Knitters from the now-famed pink hat project named after Trump’s boast of molesting women were part of the event’s Knit-In, yarn of many colors were used including  to make the widely known pink hats; the knitters taught participants to make hats, and photos were taken to be posted as part of their Global Virtual March.   AF3IRM brought computers so women could log in the number of hours we were striking – part of their Women’s Strike Calculator to total the number of hours women didn’t work – paid, unpaid, formal, and informal – and its economic value.  An action area was set up and cards were written for women and children held in immigration detention centers, and children did art projects in a mini Kids Village.

At sunset Salina Begay, Diné Grandmother weaver and resister, had many in tears as she told of their decades-long resistance to the coercive US Government relocation program intended to depopulate the Big Mountain/Black Mesa, AZ, area for the benefit and expansion of Peabody Energy – one of largest coal mining companies in the world.

And at 6pm participants all made LOUD NOISE together, as women did in all cities and communities that took actions as part of IWS; the LA noise was incredible, lasting a good two minutes httpss://www.facebook.com/peterp.nova?fref=nf.

Many people signed up to continue to work together in unity and resistance.

Earlier in the day the Women’s March/LA Foundation held “A Day Without A Woman” rally which they called the first act of the day, from noon-2pm at LA City Hall’s Grant Park.  Crowds were estimated at 2,000, a sea of pink hats, who danced to the music of two women DJ’s and heard messages of solidarity in this the first mass action by WMW since the huge inaugural weekend protests.   About the International Women’s Strike the Women’s March issued the following statement: ‘The Women’s March stands in Solidarity with the International Women’s Strike organizers, feminists of color and grassroots groups in planning global actions for equity, justice and human rights.’

The IWS/LA event was organized in 2 ½ weeks.  The planning group was coordinated by Women Of Color in the Global Women’s Strike and GWS/LA and included:  Alexandria House, AF3IRM, Every Case Matters, Feminist Majority, Gabriela LA, Guerilla Food Not Bombs, Martin Luther King Coalition of Greater LA, Military Families Speak Out, Veterans for Peace, and a range of other women including mothers, labor union members, students, an lgbtqia activist.

If you enjoyed this post, please consider leaving a comment or subscribing to the RSS feed to have future articles delivered to your feed reader.
By Change-Links|2017-03-30T23:28:45-05:00March 30th, 2017|Anti-Racism/Racism, Human Rights, Labor, News, Women|0 Comments