IN THE PUBLIC INTEREST

Donald Trump can’t fake his way through the coronavirus. It’s spreading and doesn’t respond to his delusions. Donald is flailing, failing, fibbing, stumbling, and scapegoating. With the stock market collapsing and the economy shaking, Donald fears defeat in November. Trump is a daily clear and present danger and he is the worst person to handle the COVID-19 crisis.

Last weekend, Trump and Mike Pence met with Brazilian officials at Mar-a-Lago, after which Brazilian President Bolsonaro’s press secretary tested positive for COVID-19. Despite his potential exposure, Trump refused to take the test for coronavirus. He should take paid sick leave and let competent, experienced people take the reins to combat the virus.

“Be calm,” he says, “it will go away.” “This is like the flu.” On February 26, he falsely said the number of U.S. COVID-19 cases “within a couple of days is going to be down to close to zero.” The dangerous falsehoods continue to pour from his fevered mind.

Trump knows that during his tenure, he took innumerable actions that have made the US more defenseless against this pandemic and other threats. He and the evil John Bolton aggressively moved to disable pandemic prevention forces in the US government, boosted by supine, maniacal right-wing talk radio show hosts (Rush Limbaugh said the virus is “just a cold”). In 2018, the head of the pandemic response team, Rear Admiral Timothy Ziemer, left the National Security Council amid Bolton’s restructuring. Once Ziemer was gone, Bolton dismantled the entire pandemic response team. Trump also pushed to slash the budgets of the Centers for Disease Control and the National Institutes of Health. Congress stopped the cuts but couldn’t repeal the destructive policies of Trump and his henchmen. 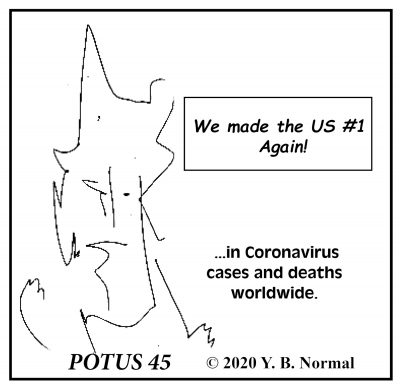 Trump insanely decided to cut USAID’s Predict program, a critical federal program that tracked infectious diseases. At the same time, he poured hundreds of billions of dollars into the bloated military empire budget with congressional complicity. According to Public Citizen, Trump wanted to cut the CDC’s 2021 budget by $1.3 billion, down 19% from the previous year. The proposed CDC budget cuts included cutting $25 million in funding for the “preparedness and response programs.”

This is sheer madness: Trump has chosen death over life. Draft-dodger Trump is stockpiling mass destruction weapons that can blow up the world many times over. But the determined golfer, right in the midst of this COVID-19 surge, did not stockpile ventilators, face masks, testing kits and other critical equipment and materials. Hospital capacity is perilously low and the number of reserve medical and nursing personnel is too small. What about readiness here at home?

Failing to head off a pandemic is what can be expected from a regime that sugarcoats and covers up its criminal negligence by not protecting the American people. Trump has blathered about China since day one, but he allowed US drug companies to continue to outsource production of most drugs to China and India. We’re utterly dependent on that fragile supply chain because Big Pharma wanted to make even bigger profits—despite the handouts they already get in the form of big tax credits and free research and development of drugs by the National Institutes of Health. The US government doesn’t even have price ceilings on drugs, allowing pharmaceutical companies to gouge people. There’s a real possibility of drug shortages soon.

Trump is trying to buy himself out of trouble through red ink deficit spending in the tens of billions to cushion businesses. At the same time he balks at eliminating the huge tax cut he gave to big business and the wealthy to provide paid sick leave, paid medical care for the uninsured, and other assistance people will need. Poor people will especially need broader medical coverage, protections from evictions, and food assistance during the crisis. Unemployment compensation funds need to be expanded during this coming recession.

New York Times columnist Farhad Manjoo wrote that “We’re all socialists in a pandemic.” That brings us to the daily vindication of the Bernie Sanders campaign. Suddenly, everyone – the banks, Wall Street, the airlines, the hospitality and tourist business, beleaguered small business, and others are expecting government agencies to help in all kinds of ways. The same CEO fat cats who, in the past decade, dumped seven trillion dollars of profits into unproductive stock buy-backs to boost their compensation metrics, are looking to the government to stabilize their debt-ridden companies. [Ed. note: Neither welfare benefits for the poor nor taxpayer subsidies and federal Reserve bail-outs for corporations are “socialism”, which is about public and worker control of environmentally-sustainable production for human need, not for profit.]

When I was campaigning for president in 2008 during the stock market crash, we hoisted a large banner at an anti-Wall Street rally that read, “Socialism bails out Capitalism.” Bernie recognizes our mixed private/public economy. He wants a better balance so that the few/powerful, in their greed, do not disproportionately benefit while the many powerless suffer. Bernie wants what western European democracies have long provided for all their people: Universal health care, tuition-free education (like we have for public high schools), living wages, stronger labor unions and cooperatives, and other social safety net benefits long overdue in the world’s biggest economy.

So long deprived of what they’ve earned, from frozen wages to looted pensions and consumer gouging, the people should shout out, “What’s the big deal, we are long overdue!”

Bernie needs to continue his campaign to the Party’s convention, just like Jesse Jackson did in 1984 and Ronald Reagan did in 1976. To drop out is to calamitously let down his supporters, including voters yet to vote. He would forfeit going after Trump, with media coverage, in ways faltering and gaffe-prone Joe Biden can’t or won’t. He would lose his leverage, backed by legions of small donors, to get concessions from Biden and his entrenched Democrats. Besides, Biden could stumble before the convention.

So it’s not just about voting margins in primaries; it’s about policies for the present and future of the US. Politics is about timing; now Bernie’s proposals will receive more attention from everybody affected.

And everybody is affected by the looming coronavirus pandemic. –Ralph Nader