Mimi Soltysik, a committed socialist with the Socialist Party USA, passed on June 28, 2020 from fatal liver cancer. Born September 30, 1974 in Reading, PA, he was the son of Mark S. and Beverly M. (Camilli) Soltysik. His loving wife and partner of 13-1/2 years is Lynn M. Lomibao. Mimi was a 1992 graduate of Schuylkill Valley High School. He received his BS in Political Science from Troy University, Troy, Alabama and Master of Public Administration from Cal State Northridge. At the time of his passing, Mimi was employed by The Maggie Phair Institute as a political educator. Mimi was a devoted activist for human rights, a lover of great music. Emidio “Mimi” Soltysik was Chair for the LA Chapter of the Socialist Party USA and the party’s nominee for President of the US in the 2016 election alongside Angela Nicole Walker, vice-presidential nominee. He was an active member of the Stop LAPD Spying Coalition.

Having suffered this great loss, his family and friends are mourning the untimely passing. His devoted partner, Lynn Lomibao, shared his highs and lows at every turn. They had a long, loving, devoted relationship…Lynn has expressed much sorrow since Mimi’s passing, she’s remained focused on the big picture, her life and Socialism. https://m.facebook.com/lomigirl22.

Excerpt from an interview with Mimi by Eoin Higgins on commondreams.org:

MS: I was born in Reading, Pennsylvania, went to grade school there, and moved just outside the city when I was in elementary school. I was basically a punk rock, skateboarding kid who hated being told what to do. I frequently found myself in trouble. Unfortunately, it wasn’t the run-of-the-mill high school shenanigans kind of trouble.

After high school was over, I played music professionally for about fifteen years. I had a lot of fun, I think. As a matter of fact, that was really all I cared about. I developed some habits that really took a toll on my health, and by my early-thirties, I pretty much ran out of steam.

For a bit, the thought of trying to pull myself together felt like it would require more effort than I could muster. But I did start to clear my head a bit.

I started trying to learn. That was tough. I frequently found myself confused and frustrated. As time passed, I think I started to really see the value in listening, hearing the voices in my community.

That was really, really painful. I felt pretty ill equipped to process what I was hearing. One foot in front of the other, moving forward, I started to take an interest in socialism, and began to make some connections. Finally, I think I achieved some clarity, and I might not have the words to express what that felt like. But, here I am… 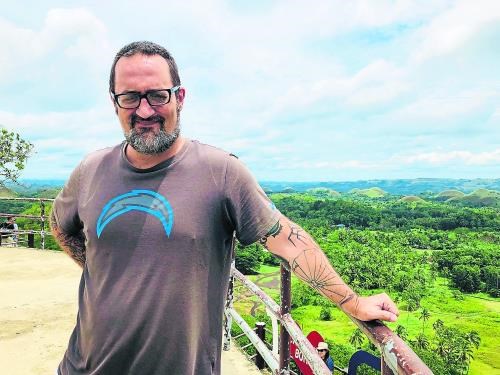 EH: How did you become involved in radical politics?

MS: Many of those experiences I mentioned earlier played key roles in that process.

There’s one thing I’d like to add: A small group of us were starting to do work around Los Angeles. We’d collect and deliver goods for survivors of human trafficking, collect bicycles for young people in South Los Angeles, things like that.

Almost without fail, staff at the non-profit agencies we’d work with would tell us some variation of “this is like trying to cure cancer with a band aid.”

I understood. Shortly after, I started to do a bit of research, hoping to find a place where I could work to help fight the cancer, and, eventually, I found the Socialist Party USA.

EH: What differentiates the Socialist Party USA from Socialist Alternative and the Party for Socialist Liberation? Do you feel allied with them?

MS: I’m not in either of those organizations, so I can’t really speak much to how they operate. What I can tell you is that I’m glad I am a member of the Socialist Party USA.

I feel allied with most anyone who seeks the overthrow of capitalism. The sectarianism on the Left is exhausting and so incredibly time-consuming if you allow yourself to engage in that sort of bullshit. I just don’t have time for it.