Imperialism and the Logic Of Mass Destruction

Imperialism and the Logic Of Mass Destruction

by Carl Boggs [excerpts from: https://www.counterpunch.org/2017/05/04/imperialism-and-the-logic-of-mass-destruction/]

As it has through much of its war-obsessed history, the US is engaged in military conflict or threatening it  across a broad terrain. In Iraq, Afghanistan, and Syria, Washington’s been sending barrages of missiles and bombs, often hitting civilians and resources needed for their survival. Death tolls mount, the largest numbers lately in the battle for Mosul. Heavier casualties are visited on non-combatants in Yemen, thanks to US-backed Saudi savagery.

Trump, like Obama, the Bushes, and Clinton before him, is operating within a pattern of imperial war-making for which ‘rules of engagement’ matter little, if at all. There’s no deviation from the norm by Trump in this respect. Pentagon elites insist nothing’s changed in their methods of warfare. While the US accuses, threatens, and attacks others for their (real or imputed) transgressions, its own apparatus of mass destruction continues with few constraints.

In recent weeks US bombs in Syria alone have killed several hundred people, mainly civilians. Daily raids in Iraq, targeting ISIS in Mosul, have accounted for more than 3000 civilian deaths, according to AirWars sources. There’s nothing “indiscriminate” about this: it’s been systematic. Moreover, the US has surpassed any other nation in production, deployment, and use of WMDs; its military doctrines embrace their virtues. 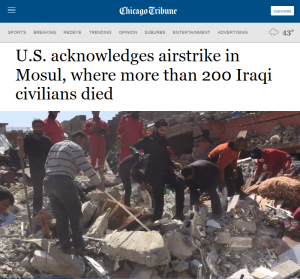 Weapons of Mass Destruction come in four types: nuclear, biological, chemical, and conventional (saturation bombing). We could add economic sanctions to this list, of the sort the US (thru the UN) imposed on Iraq during the 90s that killed  100s of 1000s of civilians. As the US resorted to sanctions in the postwar era – targeting Iran, Cuba, Yugoslavia, North Korea, and Russia as well as Iraq – the civilian death toll (well past a million) has far exceeded that from nuclear, biological, and chemical weapons combined.

Conventional warfare has brought the greatest destruction, for combatants and civilians, and remains the most imposing threat today. The WMD threat arrives in the form of saturation, carpet, or scorched-earth bombing, introduced by the UK and US during World War II and refined across decades.

The US is the only nation to have manufactured, stored, deployed, and used all five types of WMD. In densely-populated centers like Mosul and Raqqa – where 100s of drone strikes are carried out – efforts to distinguish between combatants and civilians are virtually impossible; large numbers of civilian dead and wounded are inevitable. That’s never deterred US decision-makers at the Pentagon or in the field, whatever “rules” are set forth in the Universal Code of Military Justice (UCMJ) or international statutes.

From World War II to Korea, Indochina, Iraq, Yugoslavia, and beyond, this carnage is alternately blamed on mistakes, “collateral  damage,” intelligence failures, enemy use of “human shields” – all while boasting of the latest “precision weaponry.” The US military rarely conducts genuine investigations into the devastation it produces, and for good reason: it doesn’t want to face its flagrant war crimes.

Rep. Ted Lieu recently sent a letter to Defense Secretary James Mattis seeking clarification of US global behavior: “The substantial increases in civilian deaths caused by US military force in Syria and Iraq brings into question whether the Trump  administration is violating the Laws of War.”  Trump is indeed violating such laws – specifically the 1949 Geneva Protocol prohibiting wanton attacks on civilians – but, as noted, he’s simply following entrenched US practices. For more than a century US imperialism has been fueled by a combustible mixture of national exceptionalism, militarism, racism, and pursuit of global supremacy. Civilian inhabitants and their necessary supports have never stood in the way of these powerful forces, even where it has meant resort to  WMD. Demonized Asian populations have been mercilessly targeted.

As Washington looks to reassert economic, political, and military leverage in the Asia-Pacific region – the so-called “Asian Pivot” to contain China – escalating US threats should be taken seriously. Whether conventional or nuclear, the Pentagon is poised to strike first against North Korea.  For years, the US has done everything short of all-out war to intimidate and subvert the Democratic Peoples Republic of Korea: military exercises, economic sanctions, cyber-attacks, troop deployments, constant threats. There’s talk of “preemptive war,” including efforts to “decapitate” the regime. A missile-defense system (THAAD) is being installed across South Korea.

Sec. of State Tillerson said that for talks to occur North Korea would first have to “exhibit good faith” by jettisoning its nuclear program – a complete non-starter. Given such arrogance, can mounting confrontation be avoided? With all that’s at stake  rational leadership might be expected to retreat from such a nightmarish scenario and consider a more peaceful modus vivendi. For the US, a peaceful option is exactly what’s “off the table.” From the standpoint of Washington, imperial pursuits are “rational,” and imperial pursuits generally lead to military pursuits.

Koreans already know far more than they would prefer about the horrors of mass destruction emanating from the US.  A war of annihilation, carried out by the US to secure battlefield victory in the face of strong Chinese and North Korean forces, left a death toll on the peninsula with estimates reaching as high as five million, nearly 80 percent civilian. When the US Army was forced to retreat in 1950, Gen. Douglas MacArthur ordered his air force to destroy “every means of communication, every installation, factory, city, town, and village” in Korea. 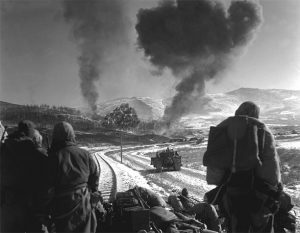 The US did launch biological warfare in Korea, a criminal project it has tried to keep secret.  Evidence uncovered by the Koreans and Chinese revealed a US campaign to disseminate a wide variety of deadly biological agents, hoping to create epidemics, panic, and social breakdown in the north.  In late 1950 large outbreaks of plague, cholera, smallpox, and encephalitis were reported in Pyongyang and several provinces.

Gen. Matthew Ridgway, US 8th Army commander, said in 1951: “The real issues are whether the power of Western civilization, as God has permitted it to flower in our own beloved lands, shall defy and defeat Communism . . . [and] whether we are able to survive with God’s hand to guide and lead us, or to perish in the dead existence of a Godless world.” Stephen Endicott and Edward Hagerman, in The US and Biological Warfare, write: “As it had been in World War II, strategic bombing was extended to the mass destruction of civilian populations, and as in World War II the reservations that the U.S. had about saturation bombing of Europeans in that earlier war were not extended to Asians.”

Gen. Curtis LeMay, architect of the firebombing attacks on Japanese cities in World War II, later conceded: “If we had lost the war we would all have been prosecuted as war criminals.” Allied prosecutors at the Nuremberg and Tokyo tribunals moved to exclude that possibility, so aerial mass murder was exempted from wartime culpability. The US refuses to participate in the International Criminal Court (ICC), understandably fearing prosecution  of its own government and military personnel for war crimes.

Less than a decade after the Korean War the US waged war in Vietnam, Laos, and Cambodia, dropping 8 million tons of bombs (compared to the 2.000.000 tons dropped on all countries in World War II),  equivalent to 640 Hiroshimas. By 1974, the US had dropped seven bombs for every person in Indochina. As for napalm, 373,000 tons were unleashed in Vietnam, compared to 32,000 tons in Korea. In Vietnam, the Pentagon relied heavily on chemical warfare: roughly 6500 flights to spray Agent Orange and other toxic agents were carried out between 1962 and 1971, to destroy crops and foliage. Operation Ranch Hand contaminated more than 31,000 square kilometers, poisoning 4,000,000 people and leaving 100s of 1000s with cancer, lung diseases, and birth defects.

Technowar managers are not sensitive to the prospects of massive civilian losses. Normal behavioral assumptions don’t apply to U.S. war calculations, whoever occupies the White House.

Carl Boggs is the author of The Hollywood War Machine, with Tom Pollard (2nd edition forthcoming), and Drugs, Power, and Politics, both published by Paradigm. He’s a subscriber to Change Links.

If you enjoyed this post, please consider leaving a comment or subscribing to the RSS feed to have future articles delivered to your feed reader.
By Change-Links|2017-05-27T03:33:16-05:00May 27th, 2017|Anti-Racism/Racism, China, Historical, Iraq, National Security, War|0 Comments