How Most of the US Left Failed Syria

How Most of the US Left Failed Syria

(C-L note: Rania Khalek spoke in L.A. last month at the Peace Center under the auspices of Arab-Americans for Syria, in the wake of Trump’s missile attack on a Syrian air base. She discussed the links between Saudi-financed Wahhabists on the one hand, and Zionists on the other, both backed by US imperialism, in fomenting an armed revolt in Syria, used as a pretext for direct US military attacks. This January interview provides some background.) As U.S.-backed jihadists invaded Syrian neighborhoods, imposed a reign of terror and tried to force state collapse, many segments of the U.S. left cheered the armed groups and ignored their victims. In November, Rania Khalek was in Syria and in Aleppo to get on-the-ground reports, whereas international journalists are frequently filing reports on Syria from Beirut and Istanbul. She just published a piece for FAIR titled, “In Syria, Western Media Cheer Al Qaeda.”

Emersberger: You put forth a really devastating critique of the Western media’s coverage of the conflict. A question, after the Western produced catastrophes in Iraq and Libya especially, is why any significant number of western leftists, who wouldn’t be taken in by establishment propaganda on Palestine, would be unreservedly cheering for the same side as the U.S. and Saudi Arabia in Syria?

Khalek: I don’t want to paint the Western left as all the same because the left isn’t in agreement on Syria. …

There’s also an information vacuum that’s been filled with rebel propaganda. The US and its allies in the UK and Gulf states have spent tens of millions of dollars on public relations that sanitize the rebels as “freedom fighters.” Western media outlets have become dependent on this propaganda because their reporters can’t enter rebel areas for fear of getting kidnapped or killed. The Syrian government, on the other hand, has done a terrible job at communicating its side of the conflict. Its propaganda is far less sophisticated than that of the rebels and it’s easy to vilify because its hands aren’t clean. I think the rebel narrative dominated the information war so effectively, that even the left bought into it.

Even as it becomes undeniable that the strongest and most dominant armed rebel groups have from the beginning been a mix of criminal opportunists and violent sectarian extremists, some on the Western left continue to refer to areas under rebel control as “liberated.” To call an area controlled by hardcore jihadists “liberated” defies logic, unless you’re willing to overlook the fact that the rebel groups you spent years cheering on execute people for blasphemy.

There’s the language barrier. In Syria, English is not a common language the way it is in, say, Lebanon. While rebel groups have Western-funded PR firms facilitating their narrative to Western audiences, ordinary Syrians living in government areas aren’t nearly as accessible since many speak little to no English. This has created a skewed picture of the reality on the ground. The U.S. left has also been overly reliant on Syrian-Americans for information about the conflict. The irony is that Syrians still living in Syria express a great deal of resentment for Syrian-Americans who advocate the overthrow of their government, who they describe as either Muslim Brotherhood exiles or aristocrats who lost their land to redistribution in the 1960s. Their description reminded me of right-wing Cuban exiles in Miami.

In any case, I think Palestine is a totally different kind of conflict, but there are some similarities with regard to the US left. For example, the US left was once pro-Zionist. It took decades to finally come around to supporting Palestinians because pro-Israel propaganda in the US was far more sophisticated and effective than anything the Palestinians were able to produce.

What’s truly cynical is the way the pro-Syrian-rebel crowd has used the pro-Palestine discourse popularized on the left to build support for overthrowing the Syrian government. They equate the Syrian army with the Israeli Defense Forces and the rebels with Palestinians. This analogy makes no sense. The Israeli army is a colonial occupier that is systematically stealing land from the Indigenous population [and also occupying part of Syria itself]. The Syrian army is Indigenous and it’s fighting an insurgency made up of some Syrians along with tens of thousands of foreign fighters from all over the world. 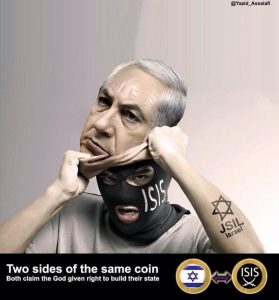 Emersberger: You’ve mentioned that the vitriol and lies directed at you in response to your Syria reporting surpassed what you’ve ever received regarding Palestine. Anything else that has surprised you about the attacks?

Khalek: What surprised me most about the attacks and smears, which were launched by neocons and Zionists, is the degree to which people who support Palestine believed them and participated in spreading them.

As someone who has covered Israel/Palestine and has been heavily attacked because of it, I’ve never experienced the sort of blacklisting that came with showing skepticism toward the mainstream narrative on Syria. The behavior of progressive media, in particular, has been incredibly disillusioning. I lost my main source of income because of the Syria smears. And I’ve since had a difficult time finding outlets on the progressive left willing to publish on-the-ground reporting from places like Damascus and Aleppo. As US-backed jihadists invaded Syrian neighborhoods, imposed a reign of terror and tried to force state collapse, many segments of the US left cheered the armed groups and ignored their victims.

Emersberger: Some of the pushback I’ve received when I’ve raised the other side of the story about Syria is that Doctors Without Borders/Medecins Sans Frontieres (MSF) has reinforced the Western story in many public remarks. Their hospitals have been bombed by the Saudis in Yemen and the US in Afghanistan, so it’s understandable people would find them credible. However, in response to criticism of their Syria remarks, they’ve conceded that they don’t have international staff operating in government-controlled areas. Their sources are Syrian doctors working in rebel-controlled areas who are not MSF staff. Do you have any comment on this, and why does the Syrian government not let groups like MSF into the areas it controls?

Khalek: I have no idea why the Syrian government doesn’t allow in Doctors Without Borders. You would have to ask them. What I can say is that rebel areas are tightly controlled by groups that have killed health workers, aid workers and activists, so any information coming out of rebel areas should be treated with skepticism. Western humanitarian groups uncritically relaying information out of rebel areas has been a serious problem throughout the war in Syria and suggests they’re not as independent of their respective government’s geopolitical ambitions as they might claim.

Emersberger: You’ve said that that left should see religious extremism more as a dangerous tool of the West and of Western-backed dictators and less as arising from “legitimate grievances.” Could you elaborate on that?

Khalek: In the 1980s, the US armed religious extremists — like Gulbuddin Hekmatyar, a bin Laden associate whose claim to fame was throwing acid in the faces of unveiled women — to fight the Soviet Union in Afghanistan. These armed mujahideen groups were the precursor to the Taliban and Al Qaeda. Twenty years later, Al Qaeda pulled off an attack in the US that killed 3,000 people and has been invoked to justify endless war ever since.

Extremist groups like Al Qaeda certainly harbor some legitimate grievances against Western foreign policy. Why is there [such] blowback from these regions? The reason is that the US and its Gulf state partners have been funding and arming violent religious extremists to fight their adversaries in the Middle East. But as soon as these extremists target the West [biting the hand that feeds them], the West blames Islam, curtails civil liberties and uses the attacks as justification for more war.

But the problem isn’t Islam. The problem is the deliberate spreading of Wahhabism, which preaches hatred and incites to violence. It’s the ideology that drives ISIS and Al Qaeda and all their clones. The jihadist groups the US government has empowered in places like Syria are tools of the West. Their hateful actions, whether in Syria or Iraq or Paris or New York City, should not be excused as responses to legitimate foreign policy grievances. The reality is the US and Gulf states have for decades funded a hateful and fanatical ideology. One of the consequences of funding hate has been reprehensible attacks that end up fueling the far right in Western countries.

In the era of demagogues like Donald Trump, it’s crucial that the left be clear about the roots of jihadist violence. US foreign policy is to blame for jihadist violence because our governments empowered jihadists in the first place and then used the blowback in our countries to justify more war. If we aren’t honest about this, we will end up ceding the conversation to the far right, ensuring that the demagogues get away with blaming Muslims, Arabs and refugees for a problem the West created and continues to aggravate.

If you enjoyed this post, please consider leaving a comment or subscribing to the RSS feed to have future articles delivered to your feed reader.
By Change-Links|2017-05-02T21:10:21-05:00May 2nd, 2017|Israel and Palestine, Movements, Palestinian, Peace, Protests and Rallies, Saudi Arabia, Women|0 Comments