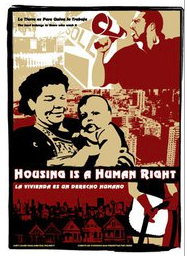 Are you facing foreclosure or eviction? Are the police trying to sweep you off the street or drive you out of public housing? Are you struggling to put food on the table for your family? 20% of Angelenos (one in every five) face the same problems.

On April 8-10, an important conference on the housing and hunger crisis in Los Angeles will be held at the Southern California Library for Social Studies and Research and the Angelus Plaza auditorium downtown. It will bring together affected people to address the struggles for food and water sovereignty, the human right to housing and the reclamation of land.

As we build practical unity for a collective understanding and response to these issues, we will address some key questions, such as: Why did the current economic crisis develop and spread out of the real estate sector in the U.S.? How did the collapse of housing prices and home sales, and the resulting credit crunch, lead to unyielding double digit unemployment? How is it that land, so central to the economy and to life itself, is so often overlooked in economic and political analysis?

The system wants us to blame ourselves or to stigmatize unhoused people and those living in vehicles, or get us to point the finger at migrants and the formerly incarcerated. But the fault is neither in our stars nor in ourselves – the system is to blame.

The mortgage market is larger than the stock market. Debt, especially mortgage debt, far exceeds equity. Even without the drop-off in housing prices after their absurd and unsustainable run up, interest payments on mortgages are always much greater than the value of the homes that guarantee them. The popping of the bubble exposed a deeper reality – that the real wealth of this system is not in money or even gold, but in the land, its resources and the labor of its inhabitants.

Capitalism began with the transformation of land, and of nature itself, into “capital” through the private expropriation of the commons. A proletariat was created that had to sell its labor to survive. The extension of this system from Europe around the globe through settler colonialism is at the base of the subsequent “globalization” of capital.  Empire is a house of cards based on the illegitimate conquest and theft of the land.

There is a fundamental challenge to the Empire’s title to the land raised by the Hawaiians, the Maya, the Mohawk, the peoples of Africa, the Aboriginal Australians and all other indigenous peoples. It undermines the concepts of private ownership of land and of Empire-state national boundaries. It exposes the theft and fraud on which the edifice of mortgage debt, credit default swaps and derivatives rested and ultimately collapsed.

The ability of the Empire to loot the resources and labor of people in Africa, Asia and Latin America, including the social wealth accumulated in the old Soviet bloc and in China under “communism,” resulted in levels of capital accumulation unparalleled in human history. This in turn precipitated a vast, steep and protracted economic contraction. Just as in Eastern Europe, both the accumulation and the contraction have eliminated the life savings and social security of hundreds of millions of people. The imposition of austerity through attacks on the social safety net, public education and social services and pensions, is now spreading and deepening into an attack on organized labor. In Eastern Europe, privatization of social wealth resulted in a near-genocidal reduction in life expectancy. The pension system was looted by new, and newly rich, private entrepreneurs. We can expect the same here unless we unite and fight back, recognizing that winning requires a fundamental transformation of the economy, and our relationship to each other and to the land.

The Los Angeles Housing and Hunger Crisis Conference is an effort to advance that necessary process. We will combine practical workshops about avoiding foreclosure or eviction, defending tenants’ rights, stopping homeless sweeps and protecting public housing and parks, with direct action strategies for growing and sharing healthy food, and rebuilding the commons, and much more

Come learn about indigenous rights, tenant and homeowner organizing, urban gardening and farmers’ markets, urban environmental justice, and how to “fight city hall” and win! Come share your own organizing efforts and struggles, share perspectives and help shape on-going strategies to shift the balance of power in favor of popular sovereignty, self-determination and solidarity. We can only solve these problems by building a strong movement that can transform the economic and political system that produces them!

The Conference will open Friday, April 8, from 7-10:00 PM at the Southern California Library, 6120 S. Vermont, LA with a program on the Culture of Resistance featuring music, art, teatro and spoken word. On Saturday, April 9, from 10 AM – 4:00 PM, events will shift to the Angelus Plaza Auditorium, at 255 S. Hill St. for the keynote speakers and plenary, skills share, know your rights and educational workshops, and a free lunch. On Sunday, April 10, from 12 noon-4:00 PM it returns to SCL, 6120 S. Vermont Ave., L.A. for strategy and alliance building workshops.

If you enjoyed this post, please consider leaving a comment or subscribing to the RSS feed to have future articles delivered to your feed reader.
By John Johnson|2016-10-07T02:21:05-05:00April 1st, 2011|Commentary, Editorial, Events, Human Rights, Michael Novick|0 Comments