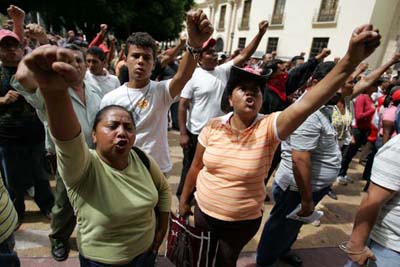 The UN World Food Program (WFP) recently reported that about 800,000 Honduran children suffer from chronic malnutrition. An alarming number of Honduran families live without access to basic foods, where seven of every 10 people live in poverty, according to the WFP.

President Porfirio Lobo declared 2011 as a year of food and nutrition security, and announced a strategy to guarantee the right to food; however, the Honduran medical sector says that no part of that promise has yet been fulfilled.

The WFP warns that malnourished children suffer from physical and intellectual development that impairs their social integration. “A country in which 27% of its children suffer chronic malnutrition is not only a developmental problem, but also one of security,” announced the Honduran Doctors Association, as quoted by El Heraldo newspaper.

The Plataforma Agraria or Agrarian Platform, describes these problems as having their roots in the unfair distribution of wealth. In that Central American nation, 1% of producers controls one-third of the best and most productive land.

El Frente de Resistencia or Resistence Front, denounced shortages and higher prices for basic foods. This social organization stated that the prices have unexpectedly risen for beans and dairy.

Honduran children also face the threat of privatized public education. Since the beginning of the year teachers have been marching to protest this policy. The Honduran Teachers Federation alerted La Tribuna newspaper that “education is in danger” if the government continues its privatization plans.

Another grave issue affecting Honduran children is the alarming rise in fatal violence against women. More than 800 women have been murdered in the country in the last two years. According to La Tribuna over 40 more women have been killed since January 1st and their cases remained unsolved.

Poverty and food shortages destroy lives and breed violence. While all suffer, Honduran children and women face the greatest risks, at this time. The Lobo Administration needs to implement strategies to keep farmlands productive for all its citizens, public schools free and women safe.

If you enjoyed this post, please consider leaving a comment or subscribing to the RSS feed to have future articles delivered to your feed reader.
By John Johnson|2011-03-01T13:12:10-05:00February 28th, 2011|Carlos Quintanilla, Commentary, Democracy, Editorial, Honduras, Uncategorized|0 Comments