The delegation idea began 10 years ago, when we had many debates about China with U.S. labor and anti-globalization activists. I then realized that there’s an urgent need for U.S. activists to meet with Chinese activists face-to-face, for honest dialogues. However, it took several years of non-stop negotiations between both countries, and to finally generate enough activists’ interest to organize the delegation. 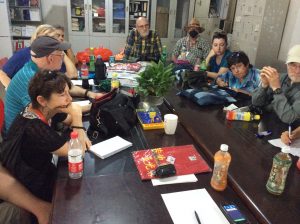 While several activists from the delegations had traveled to China in the past, and they have many Chinese-American friends, they still didn’t expect what they saw.

During the 10-day trips, we visited many interesting places and met many people, including:

Beijing Democratic Parties and the Democratic Building: Office of China’s eight national minority third parties; they all have seats in China’s National Congress, and their role in the Chinese political system. The North American delegation was surprised that China’s parliament (Do) has three parties besides the Communist Party, and they have more influence than third parties in the U.S.

Meeting with left-wing cyber and grassroots Maoist activists in Beijing and Shanghai: The biggest surprise for the delegation—they had never met the broad-based, grassroots Chinese left-wing activists and hard-core Maoists, with face-to-face dialogue; both sides have many common perspectives.

Shanghai Comfort Women Museum: One of the most violent sex war crimes committed by Japan during Would War II; however, it never became a justice campaign for western peace activists, because Japan is a western ally, even the peace movement considers Japan as their partner before any other Asian countries (although Japan invaded and committed many horrible war crimes).

Why do westerners, even with the best intentions, have difficulties meeting and understanding China? As “duh!” as it sounds, the simplest reason is language barriers, with the challenge of culture difference.

While many Chinese study English, and many of them can speak very fluently, they’re generally pro-western right wingers, they won’t bring westerners to the Chinese left-wing activist circles. For Chinese left-wing community, and average Chinese working class, most of them don’t see any value in speaking English due to strong cultural pride. The language barriers prevent westerners (very few western activists study foreign languages beside Spanish) to truly understand China, and prevent them from meeting any left-wing activists. 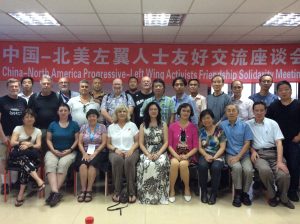 Lessons to the U.S. Activists:  Don’t Bark Up the Wrong Tree!

The delegation was successful but not without controversy, “The delegation was fine with the exception of my fellow delegates…I don’t think I have ever been smacked in the face quite so blatantly with White Privilege and unconscious racism…” one of the well-respected activists from the delegation conceded. In my opinion, white privilege was reflected in undeniable “white-savior” activist attitudes, assuming that any third world country’s people are begging for their help to save them

How can U.S. activists build true international activist solidarity? My answer: be more sincere, humble, respectful to the local customs & political views REGARDLESS of whether they fully agree with your core values—and be willing to report these finding uncensored to the U.S. activist communities. Be good listeners, research and study everything, learn their language; relax and have fun.

If you enjoyed this post, please consider leaving a comment or subscribing to the RSS feed to have future articles delivered to your feed reader.
By Change-Links|2017-09-30T02:59:23-05:00September 30th, 2017|China, China, Historical, Immigration/Migrant rights, Labor, Volunteer|0 Comments