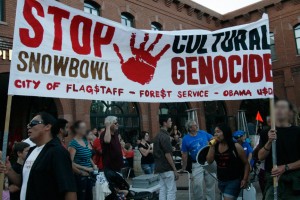 From Cultural and Environmental Assault

Since May 25, 2011, the owners of Snowbowl, a ski resort in Northern Arizona, have laid over one third of a nearly fifteen mile wastewater pipeline, and have clearcut over forty acres of rare and old growth alpine forest on the San Francisco Peaks. The Peaks are holy to more than thirteen Indigenous Nations all over the southwest.

For over a decade, tribal and environmental groups have opposed the US Forest Service’s decision to allow the spraying of treated sewage effluent to make snow on the Peaks, by mobilizing public awareness and action through grass roots media, and by pressing lawsuits. One suit made it all the way to the Supreme Court, but they refused to hear the case.

The Holy Mountain is a place of worship where deities reside, offerings are made and traditional medicine herbs are gathered. According to native beliefs, the health of all species is inseparable from the unmolested purity of such sacred sites.

Ongoing protests, demonstrations, prayer circles and encampments on The Peaks have been organized. The movement has attracted international attention. Participants are racially diverse and include concerned skiers. Nonviolent civil disobedience, involving no destruction of property, has resulted in 26 arrests as of late August.

On Friday, August 19, the Hopi Tribe filed a lawsuit against the City of Flagstaff in Arizona Superior Court in Coconino County challenging the City’s decision in September 2010 not to amend or cancel the contract for the sale of 1.5 million gallons of reclaimed wastewater per day to the Arizona Snowbowl for snowmaking.

The Hopi lawsuit states that the contract is illegal because it violates several Arizona laws governing the proper use of reclaimed wastewater, such as the avoidance of runoff and overspray. Restrictions on limiting human contact with wastewater cannot be met, nor prevention of harm to the unique environment, including rare animals and plants.

The contract violates the Arizona law against unreasonable environmental degradation. If implemented, it will deplete drinking water resources which, in drought country, are limited, to begin with. Further negative impacts of wastewater include chemicals and hormone disruptors, interfering with human and animal sexual development, behavior and reproductive problems.

Sacred site are at currently risk, worldwide, as corporations and developers assault religious and cultural values, while destroying irreplaceable resources for profit. Demonstrations and arrests are on the increase.

Prayer Circle every Saturday through summer and on key winter holidays and big snow days. Help deliver a double punch by invoking divine protection, and tying up traffic and parking at the same time. Location and information at <www.truesnow.org>. Join (or start) an encampment.

Comment to the USDA on their draft report on sacred sites. Link to text at    <https://www.fs.fed.us/spf/tribalrelations/sacredsites&gt;. Comment deadline: Oct. 4.

Urge an immediate halt to all development on the San Francisco Peaks, and the revoking of Snowbowl’s Special Use Permit by the Forest Service. Write to: Tom Vilsack, U.S. Department of Agriculture, 1400 independence Ave., S.W. Washington, DC 20250 Phone: 202 720-3631.

Become the media. Learn more at the sites mentioned. Find out more about sacred sites, worldwide. Post information on your blog or Facebook site. Encourage others to do so.

http://www.indigenousaction.org has agreed to handle donations for gas money and jail/legal support.

If you enjoyed this post, please consider leaving a comment or subscribing to the RSS feed to have future articles delivered to your feed reader.
By John Johnson|2011-08-31T19:11:48-05:00August 31st, 2011|Commentary, Environment, Health, Health Care, Human Rights, News, Politics|0 Comments