Since 1984, the extra warming caused by human-induced climate change approximately doubled the amount of forest fire area in the western United States, according to a new report. The study found that climate change doubled the drying trends that would have naturally occurred in those areas, leading to twice as many high-fire-danger days, and twice as much fire.

According to the findings, the extra area burned in the last few decades due to climate change is equal in size to the areas of Massachusetts and Connecticut combined.

While previous studies have implicated a relationship between anthropogenic, or human-induced, climate change and an increase in forest fires, the new report may be the first to quantify the degree to which one affected the other for the last 30 years.

The report, “Impact of Anthropogenic Climate Change on Wildfire Across Western U.S. Forests,” was published in the Proceedings of the National Academy of Sciences.

“All the conclusions ended up pointing to this doubling,” said Park Williams, a bio-climatologist and assistant research professor at the Lamont Doherty Earth Observatory of Columbia University. He coauthored the new report with John Abatzoglou, a professor of geography at the University of Idaho. “The west would’ve gotten dryer anyway because of natural Pacific Ocean circulation changes, but, the human-caused climate change part approximately doubled those trends toward drying and longer fire seasons and ultimately doubled the amount of area that burned in the last few decades.” 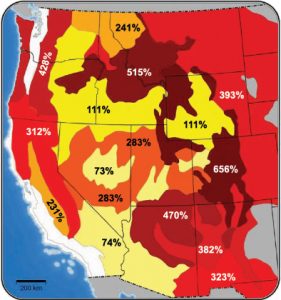 While there are many climate and other variables responsible for forest fire, including lightning and downed power lines, researchers found that fuel aridity, or the dryness of the climate, was the single most important factor that strongly dictates how much forest fire burns in a given year. They then created a novel climate model that compared the dryness of the climate each year for the last 30 years in the western United States to how much of the forest burned in those areas. They subtracted known climate change impacts during that period, and reran their calculations to determine what the fire area would have been like in those same years without human-induced warming temperatures.

The authors found that in the absence of climate change, the western states would have experienced approximately half the amount of fire that actually took place.

“This is a study of what the world would have been like in the absence of climate change,” Williams said.

Since finishing the study, the authors have extended their calculations to look at specific regions around the country that were the most, or least, vulnerable to an increase in forest fires due to climate change. They found that the global warming influence on forest fire area was strongest in the Northwest, including Idaho, Wyoming, Montana, eastern Oregon, and eastern Washington.

In California, the global warming influence was weakest, contributing to about 25 percent of the total area burned since the mid-1980s, as opposed to on average 50 percent for the western United States overall.

“California has a much higher population, and so there are more people intervening with the relationship climate has with fire there,” Williams explained. “California also has extreme wind events that can cause the entire year’s burned area to be out of sync with the year’s average aridity. The Santa Ana winds, for example, can cause gigantic fires with just one dry hot week.”

The authors developed the methodology for the study last year while investigating the relationship between California’s historic drought and global warming. Lack of precipitation is largely responsible for the state’s drought, but they found human-induced warming accounted for about 15 percent of the drought’s severity. They then looked at the frequency and intensity of fire in the area. Precipitation trends typically go up and down in cycles over decades, and the amount of fire more or less corresponds to those trends: Wet years normally mean less fire.

*  “This is a study of what the world would have been like in the absence of climate change.”

“But when we looked at fire in the west,” Williams said, “it’s been going through the roof. Since the mid-1980s, the area of forests that burned in a given year has increased by about nine-fold. That was curious to us, because fires should be very sensitive to precipitation. If precipitation is going up and down without too much of a trend, then why do we have this really extreme increase in fire? One hypothesis is global warming. So we set out to uncover to what degree is warming responsible.”

“Fire responds very rapidly because of this exponential relationship. That’s why any year in this decade would be unrecognizable to fire experts in the 1980s—we would’ve been totally taken aback in the 1980s if a fire year like what happened in 2012 occurred. By the 2030s, I expect the fire regime in the western United States to have leapt again, so that the big fire years in the 2030s look nothing like the big fire years now.”

Williams points to the Las Conchas fire in 2011 in northern New Mexico as an example. That year, there were some warm temperatures that would’ve occurred otherwise, but the extra climate-change-induced warming tipped the scales.

“That fire was exceptionally energetic. All I was hearing from career firefighters was that they had never seen anything like it. That was because of a little extra warming.”

Williams hopes the new findings will compel the public and decision-makers to accept and begin planning for more frequent, and more intense, forest fires—especially in particularly vulnerable areas, including towns in the Wildland Urban Interface such as Big Bear, California.

“Because climate is continuing to warm, our conclusions imply that continued increases in fire sizes are inevitable,” Williams says. “The public would benefit by getting used to that idea: expecting an increase in forest fires and learning to live with that. They shouldn’t rely on hope that a fire will not come through their town. They should expect for that to happen and be prepared for what they’re going to do, such as a getaway strategy, and clearing away fuels that could make the fire worse.”

Williams also hopes the findings will lead to a reevaluation of policy and budget priorities. Roughly $2 billion of federal funds were spent each year on firefighting since 2012, while there has been far less money spent on mitigation strategies, such as forest thinning and prescribed burns.

“Rather than having our forest service totally strapped for cash every year trying to fight all these fires and not having any resources for actually preparing our forests for fire, we should better fund them to be able to do what’s necessary in a world where fires are increasing more rapidly.”

If you enjoyed this post, please consider leaving a comment or subscribing to the RSS feed to have future articles delivered to your feed reader.
By Change-Links|2016-11-06T16:59:16-05:00November 6th, 2016|California, Capitalism, Climate Change, Ecology|0 Comments