The Tragedy and Triumph of Geronimo Pratt 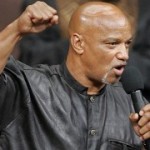 From classics like Les Miserables and The Trial to contemporary works like Hurricane and In the Name of the Father, accounts of institutional injustices and systematic abuses of power ignite the most impassioned of responses. The case of Geronimo Pratt, imprisoned for twenty-seven years for a murder he didn’t commit, is one of history’s most flagrant examples. When his plight first became known through a 60 Minutes segment in the late 1980s, Pratt was tagged “Last Man Standing” –- a reference to his status as the only internationally known political prisoner still being held after the release of Nelson Mandela. While the public learned of Pratt’s ordeal piecemeal, his dramatic life story and the injustices and abuses he suffered are now revealed in a stunning new book.

LAST MAN STANDING: The Tragedy and Triumph of Geronimo Pratt (Doubleday, Publication date: 9/19/00; $26.95) recounts Pratt’s shocking story as well as the relentless efforts of a team of lawyers who worked for nearly three decades to set him free. A former bureau chief for Time, Jack Olsen is the author of thirty-one books and holder of citations from Columbia and Indiana Universities as well as the Edgar and National Headliners awards. With journalistic skills developed in a career spanning fifty years, Olsen transforms this complex case into an utterly gripping narrative, complete with vivid character portraits, intense courtroom battles, acts of bravado and buffoonery, and the epic breadth and scope of the best novels.

Olsen leads readers through Pratt’s background, showing how and why this soft-spoken Louisianian suddenly found himself in the inner sanctums of the Black Panther Party, an odd assemblage of idealistic African Americans and loose cannons. Pratt had grown up in the bayou country southwest of New Orleans, surrounded by a loving family that valued hard work, self-reliance and education. His father eked out a living by salvaging scraps from the town dump, but Pratt and his six siblings never realized they were poor. In his senior year at Morgan City Colored High, the star quarterback came under the influence of a council of black “elders” who enlightened him about racial injustice in an era when civil rights workers were being murdered, churches fire-bombed and children burned to death.

After two tours of duty in Vietnam and fifty-five combat jumps (Soldiers Medal, Air Medal, Purple Heart), Pratt enrolled in a “high potential” program at UCLA. In his earliest months on campus, wholesale acts of police brutality and racial violence inspired him to join the Panthers. As he became more active, he found himself subjected to a mysterious campaign of harassment. Years would pass before it finally came to light that he’d been targeted by J. Edgar Hoover and a systematic FBI counter-intelligence program whose admitted goal was to undermine black solidarity and “neutralize” Panther leaders. Among other victims, two of Pratt’s closest friends were killed in a gunfight triggered by federal agents provocateurs.

The former Army sergeant and his Panther colleagues soon grew accustomed to being harassed and even held incommunicado for supposed offenses including “too many Negroes in one car” and “driving while black,” but Pratt was shocked to find himself under arrest for the brutal killing of a schoolteacher on a Santa Monica tennis court. Atty. Johnnie L. Cochran Jr. assured his client that the charges would be dropped, given that Pratt had been 350 miles away on the night of the murder and could prove it, but the 22-year-old defendant suspected a fix.

His instincts proved correct. As a perplexed young Cochran struggled to prove Pratt’s innocence in open court, prosecution witnesses trooped to the stand to shade the truth or lie. Exculpatory evidence disappeared in police stations and the L.A. District Attorney’s office. FBI “moles” infiltrated defense sessions and monitored Cochran’s phone calls. One improbable ruling after another descended from the Superior Court bench. In some of the most riveting chapters ever written about judicial corruption, Olsen takes readers inside the trial, describing brazen misidentifications by key eyewitnesses, rigged line-ups, police indifference to finding the real killers, hints of prosecutorial misconduct and subornation, blatant judicial error, and the shattering testimony of a star witness whom Pratt had ousted from the Black Panthers for brutality and who gained his revenge as an FBI informant and paid perjurer (a fact that was carefully concealed from the jury).

After ten days of deliberation and a guilty verdict that some of the jurors would later recant, Pratt was thrown into solitary confinement, his only toilet facilities a hole in the floor that routinely backed up. Nursing old shrapnel injuries, permitted only three hours of daylight per week, he was routinely beaten by guards, drugged, shunted from one dungeon to another, set up for midnight assassination by other inmates, and falsely accused of a laundry list of prison crimes from attempted murder of guards to inciting riots to planning mass escapes to masterminding the kidnapping of heiress Patty Hearst.

The ex-paratrooper maintained his sanity with self-help techniques like meditation, chanting, astral projection and yoga, interspersed with intense study of criminal law and the justice system. He kept his finely honed muscles in shape with a rigorous set of exercises that he taught to fellow prisoners and called “cellisthenics.” Body and spirit intact, he used his innate leadership skills to institute social programs and reforms that remain in place today.

While Geronimo Pratt is the central figure of the book, the author also follows his ragtag legal team, working pro bono year in year out, passing the hat to pay legal fees, filing writ after writ in a cause that never seemed better than hopeless. As a GQ headline proclaimed during the O.J. Simpson trial, Pratt’s was “The Other Case That Obsesses Johnnie Cochran.” Readers of Last Man Standing may view the young Cochran as a work in progress. As he explained later, “The Pratt case taught me and a lot of other lawyers never to accept the official version of an event, never accept a lab report, a forensic finding, never take so-called expert testimony at face value…. As a result I see things I never saw before, ask questions I never asked before.” The ordeal of Geronimo Pratt, Cochran admits, made him a better lawyer.

A few years after the original conviction in 1972, Cochran had been joined by Stuart Hanlon, a radical law student and veteran of the student riots at Columbia University. Although his big-city Jewish-Irish background seemed worlds away from Pratt’s relaxed early years on the bayou, the green young Hanlon soon found himself drawn to his client by similar political and philosophical beliefs. Working out of a claustrophobic basement room in San Francisco’s Haight-Ashbury District, Hanlon and his band of volunteers took eight years to convince a U.S. District Court judge to order prison officials to remove Pratt from the hole and place him in San Quentin’s general population, where he was hailed as a hero.

Then came the larger task of winning his total freedom against a California attorney general’s office that seemed hell-bent on keeping the “dangerous revolutionary” caged for life. One numbing setback followed another. A federal magistrate consulted with the FBI, then bottled up the case for five years before ruling against Pratt. The Los Angeles District Attorney’s office promised a full review but failed to produce a finding in three years. Parole boards routinely voted Pratt down on the grounds that he was likely to kill again or foment a bloody revolution. Judges ducked the politically charged case, and an appellate court justice walked off the bench without explanation. A struggling Stuart Hanlon, reeling from personal tragedies of his own, routinely risked being jailed for contempt, and newly appointed assistant D.A. Johnnie Cochran almost lost his prestigious job by insisting to his boss that Pratt had been railroaded by the selfsame D.A’s office.

As Pratt began his third decade in the California gulag, word of his plight began to leak via media sources like CBS Evening News, Dateline, the Los Angeles Times and California Lawyer. Supporters and relatives circulated petitions. Ghetto churches began weekly prayer sessions. A banner flew from the Statue of Liberty’s torch: LIBERTY WAS FRAMED – FREE GERONIMO PRATT. A donor contributed $60,000 for a billboard that appeared above a McDonald’s restaurant in Hollywood:

AN INNOCENT MAN IN PRISON FOR 26 YEARS.
GERONIMO PRATT.
LOS ANGELES, HOW LONG MUST HE WAIT FOR JUSTICE?

Amnesty International, the NAACP, ACLU, the Congressional Black Congress and other organizations joined celebrities like Marlon Brando, novelist Alice Walker and U.S. Congressmen Don Edwards and “Pete” McCloskey in speaking out on Pratt’s behalf. Preachers, rabbis, labor leaders and lawyers filed briefs as “friends of the court.” From South Africa, Nelson Mandela called for the release of his fellow political prisoner.

By Pratt’s twenty-third year inside, cadres of volunteer legal workers had come and gone, worn down by sheer frustration. Just when Cochran and Hanlon thought they’d exhausted their final options, another volunteer offered his help. Reverend James McCloskey of Princeton, N.J., had labored for fifteen years on behalf of those he called “the imprisoned innocent,” and his Centurion Ministries had freed fourteen doomed men and one woman. For Pratt, McCloskey played his accustomed role of one-man detective agency, spending a year slogging through the killing fields of the Los Angeles and Oakland ghettos and running up 150,000 miles of travel in pursuit of new leads.

In a spectacular 1997 show trial in ultra-conservative Orange County, Cochran and Hanlon combined McCloskey’s discoveries and a boldly innovative courtroom strategy to win reversal of Pratt’s original conviction. The Last Man Standing, now fifty, tapped his chest where he’d once pounded paratrooper wings into his bare skin and promised to obey future orders of the court. “That’s my word,” he promised the judge, “as a Vietnam vet and a man.”

On the courthouse lawn he touched a tree and told his old friend Hanlon that it made him weak in the knees. Then he went home to the bayou.

If you enjoyed this post, please consider leaving a comment or subscribing to the RSS feed to have future articles delivered to your feed reader.
By John Johnson|2011-07-02T21:30:34-05:00July 2nd, 2011|Featured, Los Angeles, People|0 Comments