Please,
Do not listen to the Trumps or the Camerons
Do not listen to the raging of FOX or The Sun
Do not listen and do not feel a need to violently retaliate.
Do more than just relate. Educate yourself and Know.
If something bad is happening, impudent liars need a scapegoat.
Not every Black and Brown person
on public transportation is trying to kill you.
It is not just a Bomb for a Bomb, anymore.
It is not just a Gun for a Gun.
Itís Socio-Economic-Genocide.
Murder for most of us is not fun.
But for the Fascists,
People like Marine Le Pen and Nigel Farage*
This war is a Cirque Du Soleil, and the death of any form of opposition is the main act. 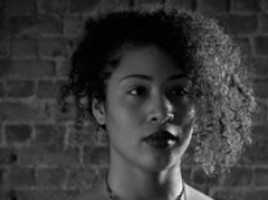 Marissa Mireles is a creative director, poet, performer, photographer and activist. Marissa has recently spent six months training in film, poetry and performance in London, England, working with The Roundhouse, Media Trust, Film London, The Museum of Archives, Vivienne Westwood, The Amy Winehouse Foundation and The Heritage Lottery Fund. Marissa’s first commissioned short form documentary, Future Revisited, had its first screening at The Bruce Castle Museum of Archives February 20 in Tottenham, London.
Marissa has published three books of poetry, one of which is titled Poetry for the Mute and is available online on Amazon, It is on the bookshelves inside Mellowpages, a community library in Williamsburg, in Brooklyn, New York. Marissa has also studied Improv in New York at United Citizens Brigade, an improvisational theater school on a diversity scholarship (UCB also has improv classes in LA). She performed March 20th in Santa Ana, CA at the Frida Cinema for an exhibition on Women in Media.

If you enjoyed this post, please consider leaving a comment or subscribing to the RSS feed to have future articles delivered to your feed reader.
By Change-Links|2016-04-05T20:04:42-05:00April 5th, 2016|Uncategorized|0 Comments