On the momentum of Chicago’s vibrant anti-police movement – the most advanced in the nation – the city’s Alliance Against Racist and Political Repression has gone national after a highly successful conference.

“This movement will be ‘black-led and left-led.’”

Eight-hundred organizers from 28 states gathered last weekend at the Chicago’s teachers union hall to “re-found” the National Alliance Against Racist and Political Repression, an organization initially launched in 1973  by Angela Davis and fellow Communists to resist state destruction of what remained of the 1960s radical movement. Davis, a university professor who became a fugitive and political prisoner when the FBI attempted to entangle her in the 1970 Marin County shootout , was on hand to help restore the Alliance to national status. “We might say that we have acquired more complex approaches to issues of repression that refused to go away,” said Davis, age 75, in her keynote to a spirited rally of mostly young, overwhelmingly non-white activists.

As reflected in the multi-racial and heavily female faces in the crowd, the movement is no longer a primarily Black and heterosexual male-led struggle. And these activists, like Davis, are committed to abolishing the police and prison system, altogether. 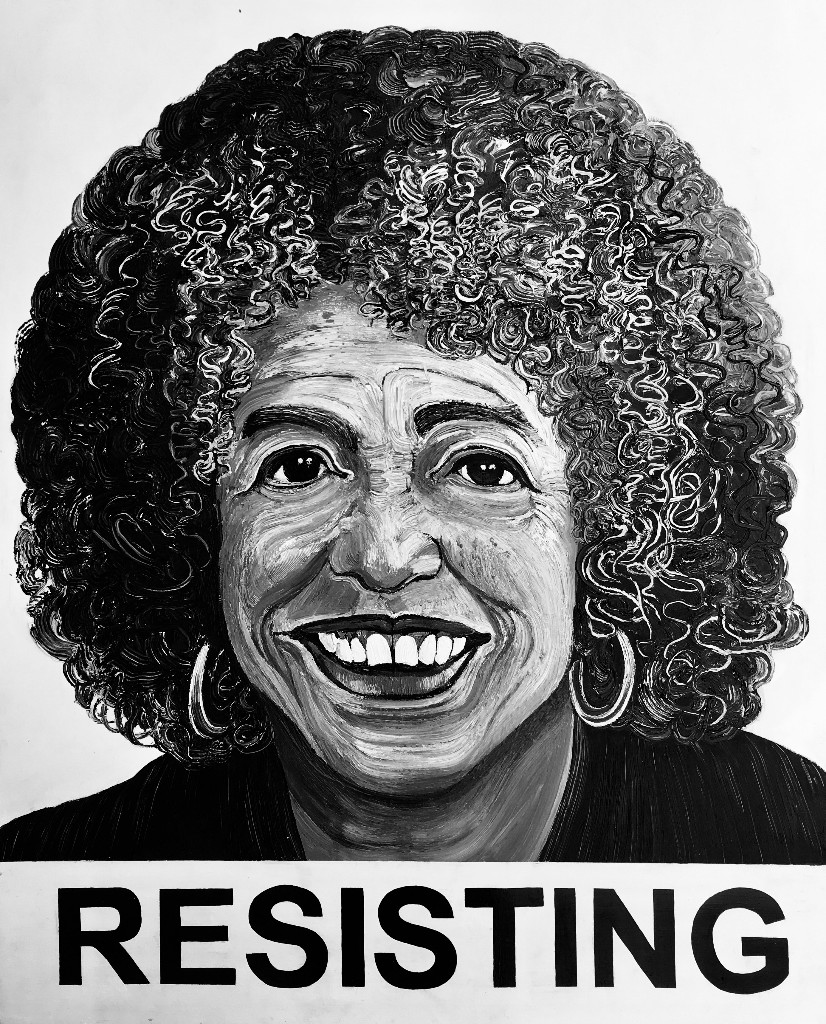 “I remember when Huey Newton and Bobby Seale began that process of patrolling the community with a gun and a law book,” said Davis. She called on the new organization to “address the causes of harm rather than rely on the failed institutions of punishment.” People shout the demand: “’indict killer cops.’ I totally understand,” she said. “It makes people feel powerful,” but that means “using the very structure and strategies that are responsible for what we are fighting against.” It’s a contradiction – but life is filled with contradictions. Abolition is the goal, but in the meantime, the police must be brought under the control of the communities that they have always brutalized and sought to suppress.

“We might say that we have acquired more complex approaches to issues of repression that refused to go away.”

The fight to make the Chicago cops accountable to a democratically elected board of community residents began in 2012, the year Trayvon Martin  was killed by white vigilante George Zimmerman and two years before Mike Brown  was shot down by a cop in Ferguson, Missouri, ushering in a “Black Lives Matter” movement. Frank Chapman, now 77, had kept the Chicago chapter of the Alliance going after the dissolution of the national organization in 1991; the chapter in Kentucky also hung on as an independent organization. The campaign to establish CPAC, the Civilian Police Accountability Council, began with 150 supporters that met “in a small room in the Englewood section of Chicago,” said Chapman. CPAC eventually amassed 60,000 supporters, the result of years of organizing against police atrocities, culminating in huge protests against the “16 shots” Laquan McDonald murder, the attempted cover-up of which led to Rahm Emanuel foregoing another run for mayor, the resignation of the Cook County state’s attorney, and a murder conviction of the cop.

“The campaign to establish CPAC began with 150 supporters eventually amassed 60,000.” 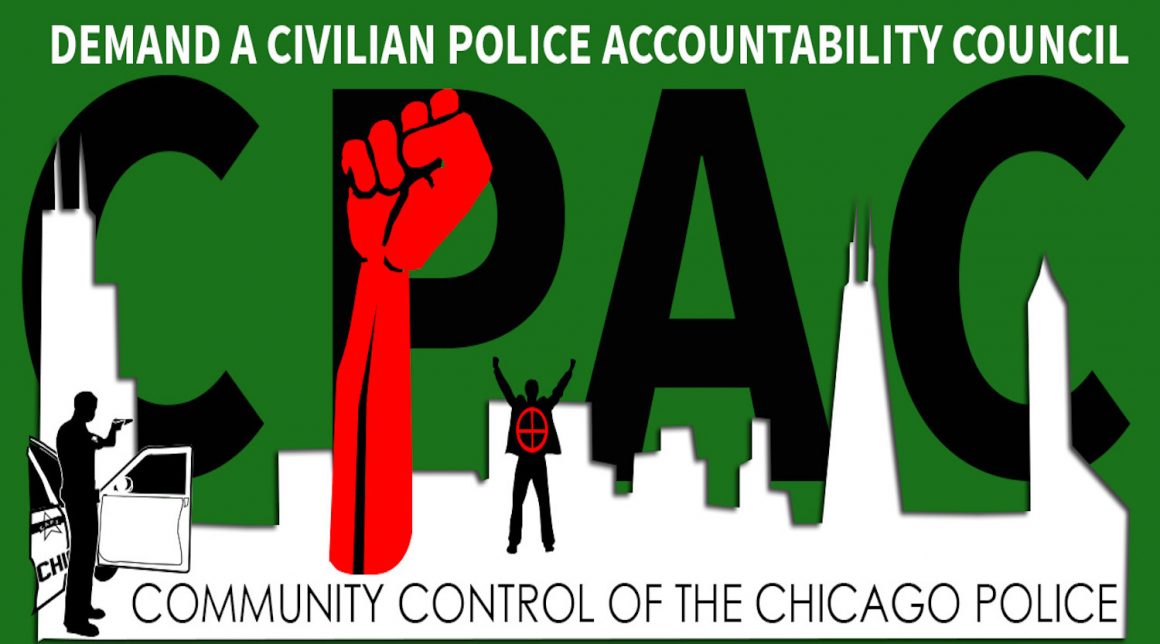 Chapman and his comrades thought the army of protesters could be strategically converted into an electoral force to push CPAC through the 50-member city council (Board of Aldermen). Before last February’s elections, only eight city council members even paid lip service to CPAC, and only one — Carlos Ramirez-Rosa – could be counted on in a crunch. Chapman recounts how CPAC supporters ran 80 candidates; 63 got on the ballot, and 19 won. “They used to call us the ‘lunatic fringe,’” Chapman chuckled.  “Well, the lunatic fringe is now 40 percent” of the city council.

Jazmine Salas, who co-chairs the Alliance with Chapman, believes that “if there had not been big demonstrations” the Alliance might not have mounted a huge electoral push for CPAC.

City Council passage requires a 26 vote majority, but 34 votes are needed to override the veto that is expected from Lori Lightfoot, Chicago’s first Black woman mayor. As a former head of the city’s Police Board, Lightfoot was a staunch defender of cops and the status quo, although she now mouths words favoring police accountability and reform. “The Police Department cannot do its job effectively if it’s not viewed as legitimate in the community,” Mayor Lightfoot told  a Chicago Police Board meeting, last summer.

CPAC bears no resemblance to the numerous – and wholly ineffective – community police review boards that have existed in cities around the nation since the late Fifties. The CPAC handout puts it succinctly: 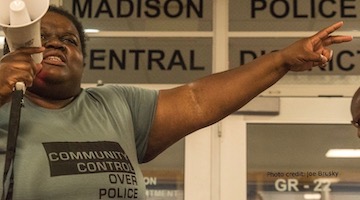 The actual legislation calls for :

A Police Control Council consisting of elected representatives from each of the Wards in Chicago, emphasizing that the Council should represent the racial, ethnic, and economic structure of the City of Chicago,  All Council meetings will be public.

Residents would cast votes for candidates for the Police Control Council, regardless of citizenship status.

“The Council will be the final authority regarding discipline in the Chicago Police Department.”

The Alliance sees “stopping police crimes as a vital strategic facet of the struggle for the abolition of penal slavery and the liberation of Black and Brown communities.” The cops view (Black and Brown) civilian intrusion into their behavior and prerogatives as anathema, and have wielded the huge political influence of the 346,000-member Fraternal Order of Police (FOP) union to ban elected police boards in a growing number of states. Organizers from Utah at the Alliance re-founding conference reported that their Salt Lake City Civilian Police Accountability Council was thwarted by FOP-led legislation .

Unperturbed by legislative pitfalls, the conference moved with the velocity of energized organizations (see a partial listing, here ), for whom voting is but one “strategy,” not the be-all and end-all of struggle. Mass action is what brought them to the teachers union hall in Chicago, and mass action would fuel the movement to abolish mass incarceration, root and branch. “Now we’re fighting for a complete change in who runs society,” said Mike Sampson, of the Jacksonville Community Action Committee.

“The system will refuse to shrink itself, so we have to shrink it,” said Tanya Watkins, of Chicago’s Southsiders Organized for Unity and Liberation (SOUL). “Police have virtually been trained to kill Black people and terrorize our community. They act as an occupying army. They have bamboozled us into believing that these slave camps keep us safe. The only path forward is community control of the police,” with the goal of Abolition.

“Now we’re fighting for a complete change in who runs society.”

Solidarity was the watchword. “Zionism is white supremacy, a colonial offshoot,” said Nazel Sankari, of the US Palestinian Community Network. “There is no way that you could be for Black liberation if you’re not for Palestinian liberation, because we’re all connected.” In the same way, said Sankari, “How can we talk about Palestinian prisoners and not the two million prisoners in the United States?”

All the delegates spoke the language of anti-imperialism, as inherent in global solidarity.

This movement will be black-led and “left-led,” as delegates repeatedly emphasized. And the political prisoners and unjustly incarcerated will never be forgotten. “We can’t build a movement if we allow them to kill or imprison or deport” our leadership, said Jess Sundin, a grand jury resister and anti-war activist from Minneapolis.

The Chicago formula for community control of the police calls for an elected board of police overseers. However, the conference also heard from organizers from Washington, DC that are pushing for civilian boards selected randomly in every police precinct. Max Rameau, of Pan-African Community Action (PACA), contends that elections are vulnerable to corruption by money-power under capitalism. As Rameau explained, PACA has begun the first phase, “winning people over to the concept of power over the police.” The goal is to hold a referendum on a community control board with powers “substantially” like Chicago’s CPAC. He believes people will be eager to “vote out the police,” and defends the random selection of board members: “If randomly selected people cannot choose which people should be walking around our neighborhoods with guns, then we should immediately empty the prisons,” because juries are randomly selected.

What’s most important, is that people take ownership of, and responsibility for, their community – and not rely on the cops. Folks must envision how an empowered community would provide its own security. “We ask people to imagine that we had 100 organizers with cars and walkie-talkies. What would you do” with them to make your community safer?

“People will be eager to ‘vote out the police.’”

There was no bickering over the various approaches to the eventual abolition of policing as we know it, and of prisons. “Let a thousand flowers bloom,” said Mike Sampson of Jacksonville’s Dream Defenders. “Whatever works, let’s go with that.”

As the conference closed at midday Sunday, Frank Chapman, the grand old man that had kept the Alliance going over the years, told the crowd of mostly young people, “You are the new leaders of this movement. I’m going to use this position to ‘pass-on.’” He warned against sectarianism (without using the term). “You cannot unite people into a mass organization if you’re just talking about ideas,” he said. “Don’t call for a united front and then start fighting with people about their ideas. We need united action to defend our ability to fight this system.”

The re-founded National Alliance Against Racist and Political Repression sees itself as a fighting united front. By acclamation, it was decided that a continuations committee meet by early spring with the aim of organizing a full convention the following year.

BAR executive editor Glen Ford can be contacted at Glen.Ford@BlackAgendaReport.com

This article previously appeared in Portside .

Or, you can comment by emailing us at comments@blackagendareport.com