by Rose Mary Elizondo and others

Fernando Velazquez was born on September 22, 1948, in Sinaloa, Mexico. He passed to the ancestors on February 12, 2022 of a brain aneurysm, a tragic loss for the peoples’ movements globally and locally.

He was born into a large family.  His mother was a true Matriarch. Fernando was a very hardworking person. He started working at a young age. He managed to obtain an education in Audio Engineering.

One of his first loves was music. He learned guitar and played with a Rock ‘n Roll band, first in Tijuana then in Southern California. He continued singing and playing not only for himself but for his friends right up to the end of his days.

Two of his iconic English language songs were “Annie’s Song” by John Denver and “Proud Mary” by Creedence Clearwater Revival, but Fernando did the passionate version as originally sung by Tina Turner. He also sang many, many songs in Spanish, many of them protest songs and nuevo cancion.

This dedication led him to KPFK. There he started off as a board operator but moved forward to broadcasting the news. He spent many decades, mostly as unpaid staff but also as news director, and for a period produced and anchored a bilingual morning newscast that Pacifica had pledged to air nationally. His most recent program, which he co-produced and co-anchored with his wife Norma Martinez, Informativo Pacifica, has been a longstanding staple of KPFK’s Spanish language programming bloc for over 10 years. The newscast also aired internationally. Fernando was instrumental in organizing the Spanish language programming bloc and programmers, and in the struggles to defend and extend that programming to meet community needs. His dedication to KPFK was truly outstanding. He also served 3 terms as an elected Staff delegate on the Local Station Board. He worked with the Grassroots Community Radio Coalition and with the other Spanish Language broadcasters to produce events in the community, and was always an incisive analyst and strong voice against injustice, militarism and exploitation. At a recent memorial and celebration of his life held in Elysian Park, not far from his home in Echo Park, many of his neighbors came out to share their appreciation of the role he had played in creating a sense of community among them, and as a gardener. 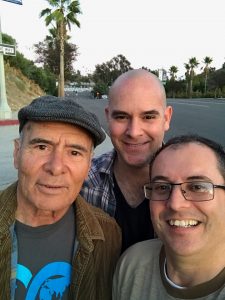 He is survived by his wife Norma Martinez, his sons Jason, Jethro, and  daughter Nayali and by siblings in Mexico.  He leaves behind a legacy of innumerable true and deep friendships along with an example of what it means to be a Warrior for Peace and Justice. His death is an inestimable loss especially to KPFK and Pacifica.