I had resolved to not go the march at all after learning that the BLM-LA endorsement on the revised march announcement was a direct lie.

My friend Chella Isabel Marie Coleman, a black trans disabled woman, wanted to play at the march with her band. She reached out to all of the march organizers but heard nothing back. She also raised issues about how she could be part of the march as a disabled woman, and was told she needed to bring her own car if she wanted to be in the march. After not hearing from anyone about her band getting to play, and given the mess of everything that had happened in the lead up to the march, Chella and her band decided to gather some folks and stage a performance at Santa Monica and San Vicente where the march ended, as the marchers arrived.

Prior to even the first march announcement, my friend Byron and I had resolved to reach out to black trans women we know to see if there was any way we could support them if they wanted to do anything around the BLM actions sweeping the country. Our plans were interrupted by LA Pride’s announcement of the Solidarity March, but supporting Chella seemed like a good way we could contribute to at least pushing back against this mess of a march.

I was asked to come two days before and help secure a generator, which Byron and I went and picked up this morning, and we arrived there around 12:20. The band was already playing using a car battery, and we took a break to switch, before starting up again. A larger crowd had gathered cause Chella’s band is really good!

Around this time, we noticed that a large group of sheriff’s deputies had gathered in riot gear with tear gas guns and other weaponry around 200 feet down San Vicente. There were also snipers on roofs. We had formed a line to block off to protect Chella when the Dykes On Bikes began to arrive around 1pm on Santa Monica, the front of the official march.

Every was going great and Chella was fucking awesome. However, as soon at most of the official march had arrived, a man immediately walked up to Chella and began shouting at her in her ear while she was trying to perform. A crowd began to form to help insulate Chella which I was part of and I tried to draw the man away. He announced himself as an organizer of the official march and said we had to stop immediately because they were in charge and they their own performance planned. I believe this man is Paul Scott, of “LA Black LGBTQ Movement” (?) according to the march announcement and doing some images searches.

As one of the folks in the middle, I let him know that the band had no intention of cutting their set short. When he claimed this was a Black Lives Matter march, and that we were getting into the way of that, I said they didn’t invite Black Lives Matter-LA and now they were getting pushback. The man said I had no business saying any of that to him as a white woman and I needed to back off and let them do what they had planned. I told him he didn’t need to listen to me and maybe it wasn’t my place but he had gotten up in my friends face and I needed him to back off.

By now there was a second man from the march yelling at Chella and we just tried to keeping backing them off. I believe the second man to be Brandon Anthony, an LA Pride board member.

Also present, and I believe originally supposed to perform, was Yuriel “Miss. Shalae” Young, who I knew from the program is a black trans woman. When she started to come over I let her through so she could talk to Chella. Their exchange initially went very poorly, and meanwhile one of the men had started yelling at the bands drummer, misgendering them (they are non-binary femme but the person assumed they were a cisgender male). This escalated cause the drummer is also white and the man from the march (again I believe Brandon Anthony) starting saying they were expressing white male anger. 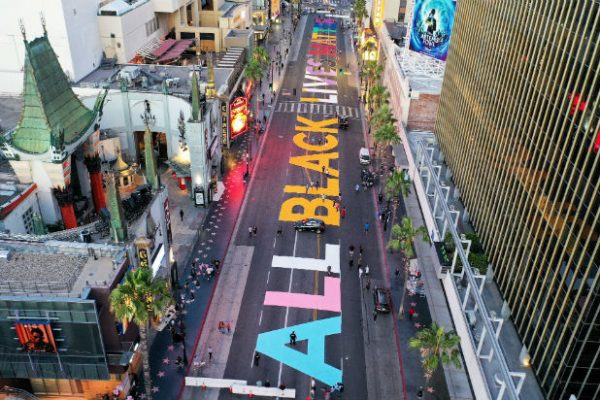 However, by now, Chella and Miss Shalae had calmed down and were talking and it was mutually agreed upon that Chella would take 20 minutes to finish her planned set. This went forward, and the march crowd was super into Chella!

All was well and I think Chella’s band was winding down when suddenly, the official march attempted to drive a Jeep through where the band was setup. They were moving slowly and they didn’t actually plow through once we were in front of them, but by their own stated intention they felt “time was up” and the jeep was intended to force the band to pack up. Paul Scott continued to be angry with me for being in front protecting the band and I did my best to communicate the best thing he could do was just back away.

The entire confrontation drew the whole thing out at least another 10 minutes, with both men from ABLMA trying to castigate the people protecting the band and yelling at Chella and others, before the band finally was able to finish their set. Byron got on the microphone and honestly gave a rousing callout of CSW, the cops, racist gays, the whole mess.

At that point we packed up and no one was arressted, through I was exhausted. Chella’s performance, and the band, were amazing, and honestly I was so happy for them that they did such a wonderful shutdown of LA Pride / the “All Black Lives March”. Among other things Chella while on the mic was calling so much attention to all the ways the “gay” community was fucking up for black trans women, and for disabled queer folks.

I feel there were multiple aspects of the ABLMA organizers behavior that was extremely inappropriate and mean, particularly towards Chella. They got in her face A LOT, and it was largely calmer unofficial voices from the official march who were also super into the bands performance that calmed them down. At the same time, I want to be absolutely clear, that while tensions were extremely high, at no point did I feel personally threatened by either of the men from ABLMA. I realize there is a ton of fucked up narrative around white women and black men, and I absolutely do not want anyone reading this as a meek white woman being threatened by black men. While I stand by my efforts to put my body in between them and the band, (and later the band and the Jeep), probably the best thing would have been for me to keep my own mouth completely shut. Though frankly, I mostly did my best to communicate that I was standing in between just to keep them away from Chella and the band.

Christopher Street West (CSW) is the historical name of “LA Pride”. I refuse to call it LA Pride cause it’s not in Los Angeles. It’s in West Hollywood, an upper middle class enclave that is supposedly an LGBTQ haven but which is actually only welcoming for white upper middle class gay men. LA Pride has always had a close relationship with the cops and a large police presence at everything they do. The extremely high entrance fees at the festival go mostly to pay the LA Sheriffs for their presence.

Everything about this march has been a fucked up mess from the beginning — from the bungled initial announcement, to inviting the cops in a bootlicking letter, to the fake “Black Advisory Board” and supposed separation from LA Pride, to the straight lying about securing BLM-LA’s announcement, to the extremely fucked up and catty name “All Black Lives Matter LA”. (also, guess the cops showed up anyway?) All of it was compounded today with their behavior at the march. To me there really is no better image of this march than a Jeep with rainbow flags revving it’s engine as it threatens to run over a band fronted by a black trans woman.

This is what LA Pride does — they step in with no skill and create community trauma. Before all this, as a I said, Byron and I had been hoping to support Black trans women in LA to do something actually empowering. Instead I’ve spent the last two weeks pushing back against this clusterfuck of a march. CSW/LA Pride is irredeemably racist. The whole board should resign, and the organization should be reconstituted with all POC leaders, at least half of whom are trans, and the march should move to LA and have no cops or corporate sponsors. Not that this will happen but I am so sick of this shit organization.