FBI Raids & the Criminalization of Dissent

FBI Raids and the Criminalization of Dissent 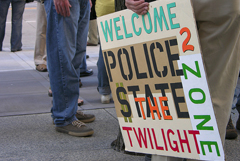 Early in the morning on Friday, Sept. 24, FBI agents in Chicago and Minnesota’s Twin Cities kicked in the doors of anti-war activists, brandishing guns, spending hours rifling through their homes. The FBI took away computers, photos, notebooks and other personal property. Residents were issued subpoenas to appear before a grand jury in Chicago. It was just the latest in the ongoing crackdown on dissent in the U.S., targeting peace organizers as supporters of “foreign terrorist organizations.”

Coleen Rowley knows about the FBI. She was a career special agent with the FBI who blew the whistle on the bureau’s failures in the lead-up to the 9/11 attacks. Time magazine named her Person of the Year in 2002. A few days after the raids in her hometown of Minneapolis, she told me, “This is not the first time that you’ve seen this Orwellian turn of the war on terror onto domestic peace groups and social justice groups … we had that begin very quickly after 9/11, and there were Office of Legal Counsel opinions that said the First Amendment no longer controls the war on terror.”

Jess Sundin’s home was raided. She was the lead organizer of the St. Paul, Minn., anti-war march on Labor Day 2008 that occurred as the Republican National Convention began. She described the raid: “They spent probably about four hours going through all of our personal belongings, every book, paper, our clothes, and filled several boxes and crates with our computers, our phones, my passport … with which they left my house.”

They smashed activist Mick Kelly’s fish tank when they barged into his home. The net cast by the FBI that morning included not only anti-war activists, but those who actively support a changed foreign policy toward Israel-Palestine and Colombia. The warrant for Kelly sought all records of his travel, not only to those countries, but also all his domestic U.S. travel since 2000, and all his personal contacts.

No one was arrested. No one was charged with a crime. Days later, hundreds of protesters rallied outside FBI offices nationally.

The raids happened just days after the U.S. Department of Justice’s inspector general released a report, “A Review of the FBI’s Investigations of Certain Domestic Advocacy Groups.” The IG looked at FBI surveillance and investigation of, among others, the environmental group Greenpeace, People for the Ethical Treatment of Animals and the Pittsburgh-based Thomas Merton Center.

Founded in 1972 to support opposition to the war in Vietnam, the Merton Center continues to be a hub of anti-war activism in Pittsburgh. In 2002, the FBI spied on a Merton-organized rally, claiming “persons with links to international terrorism would be present.” As the IG reports, this claim was a fabrication, which was then relayed to FBI Director Robert Mueller, who repeated it, under oath, to the Senate Judiciary Committee.

The illegal surveillance trickles down, through “Joint Terrorism Task Forces” that bring together federal, state and local law enforcement, homeland security and military agencies, often under the roof of a “fusion center,” the name given to shadowy trans-jurisdictional intelligence centers. There, it seems, slapping the “domestic terror” tag on activists is standard.

Pennsylvania Gov. Ed Rendell recently apologized when it was revealed that his state homeland security director, James Powers, had contracted with a private company to research and distribute information about citizen groups engaged in legal activity. Groups opposed to the environmentally destructive extraction of natural gas known as “fracking,” for example, were referred to as “environmental extremists.”

Their crime: holding a screening of the Sundance-winning documentary “Gasland.”

Back in the Twin Cities, the state has been forced to back off eight other activists, dubbed the “RNC 8,” who were part of organizing the protests at the Republican National Convention. They all were pre-emptively arrested, before the convention started, and charged, under Minnesota state law, as terrorists. The prosecution has since dropped all terrorism charges (four of them will go to trial on other charges).

This is all happening while the Obama administration uses fear of terrorism to seek expanded authority to spy on Internet users, and as another scandal is brewing: The Justice Department also revealed this week that FBI agents regularly cheated on an exam testing knowledge of proper rules and procedures governing domestic surveillance. This is more than just a cheating scandal. It’s about basic freedoms at the core of our democracy, the abuse of power and the erosion of civil liberties.

Amy Goodman is the host of “Democracy Now!,” a daily international TV/radio news hour airing on more than 800 stations in North America. She is the author of “Breaking the Sound Barrier,” recently released in paperback and now a New York Times best-seller.

If you enjoyed this post, please consider leaving a comment or subscribing to the RSS feed to have future articles delivered to your feed reader.
By John Johnson|2010-10-02T03:36:39-05:00October 2nd, 2010|Amy Goodman, News, Peace and War, Politics, United States|0 Comments