Since the 70s, campaigns of elected officials by both major parties have been financed almost entirely by wealthy special interests and corporate lobbyists in the Top 1%. More than $6.2 billion was raised and spent in 2012 for Congress and the president. More than 80% was donated by the top half-of-one percent, super-rich Americans and wealthy corporations. As a result, elected leaders have made policies and laws that have provided tax cuts for this big-business donor class, not for small businesses and working Americans.

Politicians have provided big business donors with corporate subsidies to encourage them to outsource well-paying U.S. jobs. These politicians have also neglected to fully fund education, which is needed to ensure that U.S. workers have the skills to compete with the rest of the world, and maintain their standard of living. 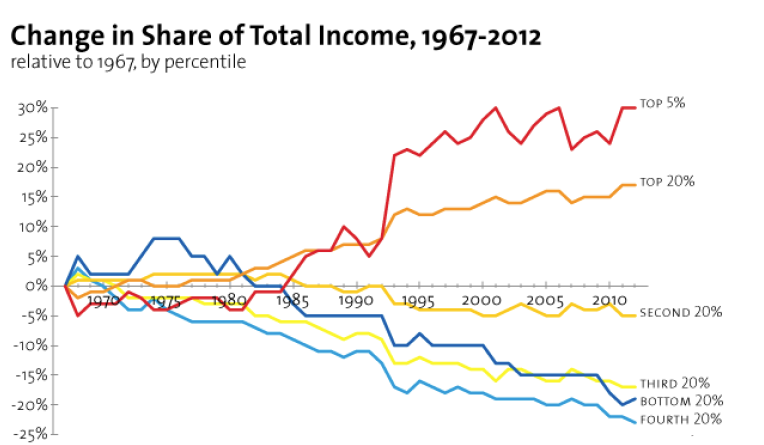 In his latest book, “Capital in the Twenty-First Century,” French economist, Thomas Piketty (who also collaborates with UC Berkeley economist Emmanuel Saez) compared the plight of the ‘middle class’ in several advanced industrialized countries including the U.S. Data from Piketty, the Luxembourg Income Study Database, and Saez clearly indicate that in the U.S. the working poor, middle and upper middle class (the bottom 99%), have fallen behind their counterparts in countries such as Canada, Britain, Sweden, Germany and other Western and Northern European nations.

In countries like Great Britain and Sweden, the median income (half richer, half poorer) has increased by 14  to 20% since 2000. The U.S. median income has not increased at all. By contrast, between 1970 and 2010, the share of national wealth of the top 1% in the U.S. increased from 9 to 20 percent.

The growing gap between America’s rich and poor was pointed out dramatically by the Occupy Wall Street movement, an important contribution to the debate over wealth and democracy. As Supreme Court Justice Louis Brandeis eloquently and forcefully stated, “We can have democracy in this country, or we can have great wealth concentrated in the hands of a few, but we can’t have both.”

We must take the dollars out of democracy. We can follow the examples of Maine, Arizona, and other states by creating voluntary Clean Money, publicly-financed elections in California and the United States. We must also adopt the “We the People (28th) Amendment” to the U.S. Constitution, which states that corporations are not persons with Natural Rights, and money is not speech.

While we work on these important medium-term solutions, we must demand that the politicians kick their corporate cash habit, by returning all campaign contributions from corporations and their wealthy owners. We must demand that politicians rely only on door-to-door campaigning with thousands of volunteers and the small donations ($5) of every resident in her/his district. As the great Abolitionist and Congressional Reporter Frederick Douglass clearly stated, “Power concedes nothing without a demand.”

Peter Mathews is the author of Dollar Democracy: With Liberty and Justice for Some; How to Reclaim the American Dream for All. He is a professor of Political Science at Cypress College, and Adjunct Professor of Sociology at Long Beach City College. He is a political analyst and contributing partner on the “Head On” radio show on KEIB AM 1150 on Saturdays from 1-1:40 PM. Visit him at http://www.epetermathews.com.

If you enjoyed this post, please consider leaving a comment or subscribing to the RSS feed to have future articles delivered to your feed reader.
By Change-Links|2014-10-31T20:13:32-05:00October 31st, 2014|Beyond Capitalism, Economy, Peter Mathews|0 Comments