In the late 1960s and early ‘70s, two names emerged from the Native American and Indigenous community that stood for resistance to white repression and assaults on Native life: Russell Means and Dennis Banks.

They were men who lived, at times, in urban America, and experienced its impoverishment as well as its penchant for broken dreams.

In a time of mass resistance and social upheaval shown by the anti-war (re: Vietnam) and Black liberation movements, Bands was among thousands of young activists of Native, Indigenous communities who rose up to speak, and act, on behalf of the oppressed.

In 1968, after leaving prison, Banks joined forces with Clyde Bellecourt to found the American Indian Movement (AIM), which sought to organize scattered Native clan members into a militant cohesive unit. At its height it had some 25,000 members.

AIM activist held protests at historic sites to draw attention to US massacres of Native peoples as well as present-day injustices.

In 1970, Banks and Means declared a “Day of Mourning” to mark Thanksgiving Day, when AIM activists seized the replica ship dubbed the Mayflower 11 in Plymouth, MA on TV, when real Indians confronted whites in Indian costume.

In 1972, a national caravan of hundreds seized the Bureau of Indian Affairs offices in Washington for a week, to protest a long train of broken treaties. 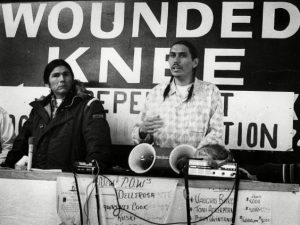 In 1973, AIM activists led by Banks seized the village of Wounded Knee, South Dakota, the site of the infamous massacre of Indians in 1890.  The siege, lasting over 70 days, would become a 20th century hotspot of conflict — armed conflict –between AIM and agents of the U.S. government.

In his later years, Banks became an actor, and his striking, chiseled features filled many a screen.

He later became an educator in several colleges for Indian youth.

On Sunday, Oct. 29th, Dennis Banks, Ojibwe, living in his northern Minnesota Leech Lake Reservation, closed his eyes on the same land where his eyes first opened, 80 winters ago.

If you enjoyed this post, please consider leaving a comment or subscribing to the RSS feed to have future articles delivered to your feed reader.
By Change-Links|2017-12-01T17:45:31-05:00December 1st, 2017|Historical, In Memoriam, Indigenous Nations, Mumia Abu-Jamal|0 Comments