Democracy Hangs in the Balance at KPFK & Pacifica

June 1 opens the regularly scheduled election process for listener and staff delegates to the KPFK Local Station Board (LSB), under the Bylaws that make Pacifica radio a unique democratically governed national media institution. June 7, a separate special costly election process begins on a revision of those Bylaws which, if it passes, would eliminate the election of LSB delegates and take away any power of locally elected representatives of the station’s listeners and staff to oversee management, budgeting or programming fairness, or to recommend or evaluate the station manager and program director.

The two separate elections, the second of which would cancel the first, represent two diametrically opposed views on the future of KPFK and Pacifica. The LSB elections are predicated on the idea that the listeners whose hard-earned dollars support the station, and the paid and unpaid staff whose hard work and creativity provide the content and technical capacity, are in the best position to assure that the station and foundation remain true to the Pacifica mission statement and continue to serve the community.

The people pushing the New Day bylaws — the second attempt in as many years to eliminate local governance and restrict or eliminate democracy and diversity at Pacifica — believe that so-called “professionalism” and top-down centralization of authority is required.

Following from that theory, New Day would split the staff in two, creating a new third class of membership, and segregate the unpaid staff in discriminatory fashion, with less representation. They’d create a hierarchical chain of command, in which a new Executive Director (ED) names all station managers without local or national board input, and strip elected local boards of all oversight and involvement with national  board committees, such as the Committee of Inclusion at each station, which works with management to ensure that previously underserved communities are involved in all aspects of the station, such as management, governance, programming and staffing. 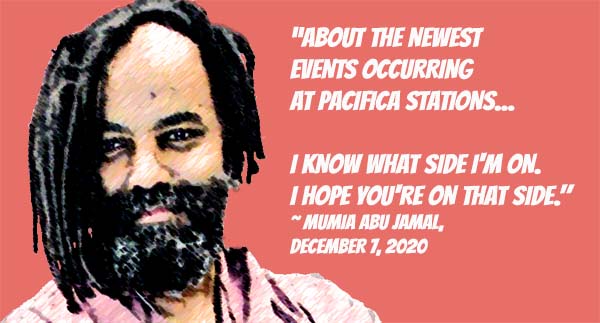 The New Day proposal tries to scapegoat governance for long-developing weaknesses that so-called “professionals” did nothing to correct or overcome. Its solution to what it terms “factionalism” is to consciously reduce representation and diversity on the Pacifica National Board (PNB) by setting up a collection of sing-seat elections designed to assure that a single faction, from a single station, can dominate the board and the selection of the powerful new ED. Without any check or balance, there is a good chance, based on the clear track  record and the repeated statements of many of the backers of the Bylaws change, that they will seek to monetize assets, such as via a signal sale or swap. Most of the new national officers who would be appointed, not elected, if the NDP Bylaws revision passes, supported the shutdown and takeover of the NY station, WBAI, in the middle of a fund drive, substituting “Pacifica Across America” — piped in from KPFA and KPFK — for the locally produced news, information and cultural coverage their listeners expected.

It’s not as if that programming has a great track record at KPFK itself, where the last General Manager (GM) again shut down the local news department, piping in the KPFA news instead, and subjecting listeners to more than half the year in fund drive to try to cover the growing payroll while listenership and membership steadily dropped. The path to financial stability and growth at KPFK and the other Pacifica stations lies in more democracy and greater diversity, including in the political perspectives and cultural expressions heard on our airwaves. The New Day proponents and the managers they support want to limit the views you hear to what is acceptable within the limits of the corporate political parties, instead of providing voice to communities that are setting the agenda for social, political and economic transformation, and devising their own solutions to the problems they face.

That’s why the KPFK Local Station Board, along with the LSBs at WBAI and WPFW in DC (the two stations with the highest percentage of Black listeners) and the Pacifica National Board have all voted “No” on the New Day Bylaws revision. Even the KPFT LSB, dominated by the Bill Crosier faction that set up the WBAI shutdown, and focuses on country music programming in the fastest growing, youngest and most diverse big city in the US, couldn’t muster the majority needed to vote yes on the NDP revision. The irreversible changes they propose would make it almost impossible to defend and extend community oriented radio, restore local news, create a morning magazine show that taps into the enormous creativity, passion and intelligence of southern California communities in struggle.

If you want to be part of the solution at KPFK and Pacifica, there are two or three things you can do this month. First, if you are currently a member (as of April 7), vote NO on the New Day Pacifica Bylaws revision when you get your ballot information by email or postcard on June 7. If you haven’t received it by June 14, contact NES@pacifica.org with some proof of your membership (credit card or cancelled check or record of volunteer service). Second, consider running for the LSB yourself, especially if you have financial, fundraising, marketing or community engagement skills that can help the station. You can download the forms needed from https://elections.pacifica.org (where there is also information about the Bylaws measure). Finally, you can join the Pacifica Fightback virtual national town hall on the deadly consequences of the NDP Bylaws revision (see the calendar section for Saturday June 5 for details). Finally, please donate and urge your friends to do so as generously as possible, to give KPFK and Pacifica the opportunity to grow and regain the impact demanded by the times we are in and the new generation of people struggling for peace and racial, social and economic justice.

As we were going to press, two disturbing developments came to light, making the effort to defeat the New Day bylaws, and to fight for community radio more important than ever: Jan Goodman and Beth Kean of New Day are seeking to prevent Pacifica’s staff, paid and unpaid workers, at WBAI and WPFW, from being able to vote on their measure, in an egregious violation of workers’ rights, the rules under the current Bylaws and their own prior agreement. Also, the new manager of KPFT appears to be proposing a purge of programmers of color in Houston, shunting some off to an HD channel with even fewer listeners.