The women of Afrin canton confirmed during a statement that the Turkish occupation army targets the resistance of women in Rojava, because behind each tree is a heroic epic set by women in their struggle, believing that the world solidarity of women is the most powerful weapon in conquering the enemy.

Kongra Star today issued a statement to the public condemning the attacks by the Turkish occupation army on the region and targeting women, where dozens of women gathered in the Afrin canton in Azadi Square for that purpose. 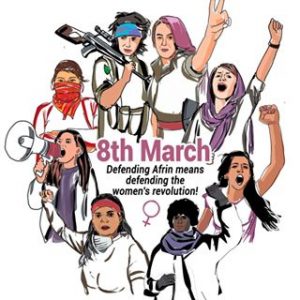 The statement was read in English by Aytan Sheikh Issa, in Arabic Fatima Lakto and in Kurdish by Hevin Hassou. The text of the statement reads as follows:

“The Turkish occupation army bombarded populated towns and villages and refugee camps with guns and warplanes day and night with the aim of displacing the population and occupying the area. It also targeted places of worship and historical places amid the silence of countries regarding the massacres and crimes committed against civilians every day.

“Recep Tayyip Erdogan publicly declared that the aim of his military aggression against Afrin is to strike at the gains of the Kurdish people, break their will and occupy their lands, to restore the glory of the Ottoman Empire and extend its fascist control over neighboring countries alongside racism and religious origins.

“Afrin was one of the first places of settlement and agricultural wealth in the Fertile Crescent, where women played a leading role in this historical process, which was described as the first women’s revolution and symbolized by the mother goddess Ishtar in the ancient heritage common to the peoples of the region and can be found in many Afrin archaeological sites.

“The Turkish fascist is trying to target the resistance women in Rojava because behind every tree and hill are dozens of heroic epics that women have set out to fight.

“We as Afrin women are determined to defend our heritage and the revolution of the first woman in our country to succeed in the second revolution of women through our resistance and our free will against all forms of injustice, enslavement and occupation.

“Women have played a leading role in building the democratic principles of Autonomous Administration through the building of independent institutions based on participatory organization, the building of councils, academies and associations for women, as well as the formation of a special armed force of women.

“Today, tens of thousands of women are carrying arms to defend their land and their future. The resistance of Women’s Protection Units are part of the global resistance by women against any form of oppression, exploitation and murder of women.

“We believe that global solidarity for women will be the most powerful weapon in conquering fascism by following in the footsteps of women who were created to defend participatory life.

“We call for an end to the aggressive Turkish invasion and occupation of Afrin and the end of the genocide and killing of the women.”

If you enjoyed this post, please consider leaving a comment or subscribing to the RSS feed to have future articles delivered to your feed reader.
By Change-Links|2018-02-28T23:59:57-05:00February 28th, 2018|Anti-capitalism, Anti-Racism/Racism, Historical, News, Peace, Politics, Syria, War, Women|0 Comments