Black Lives Matter Los Angeles (BLM-LA) organizers continue to face charges brought against them for peaceful actions taken in the names of Ezell Ford and Charlie Africa, Redel Jones and Wakeisha Wilson. The chapter has been facing political persecution for strategic peaceful demonstrations since November 2014 and continuing to the present day, with repeated arrests at the LA Police Commission and trials proceeding in various courthouses in L.A. and nearby cities.

The targeted prosecution of peaceful protestors is a clear indication of the priorities of the City of Los Angeles. Instead of taking steps to address violence against the people of Los Angeles, more violence is being inflicted upon peaceful protestors in the form of lost time, wages, and agency. Instead of investing in Black futures, resources are used to criminalize activists. Instead of honoring civil disobedience, a critical tool for a fair democracy, elected officials invoke the names of elders like Rosa Parks and in the same moment they dehumanize Black people. In response, BLM-LA and allied groups such as LA CAN and Stop LAPD Spying have issued a call for a “Freedom Budget,” taking funding from LAPD for housing, education, jobs and other community needs. The Youth Justice Coalition, as Change-Links went to press called for a protest and press conference at the LAPC to fund youth justice programs instead of police repression.
Tying up activists and organizers in court and burying them in paperwork is an age-old strategy employed by the government — one whose implications have a broad reach. The Black Panther Party was targeted by the FBI for their work protecting people from the police and providing resources to the community. The FBI, led by J. Edgar Hoover, used surveillance, infiltration, and harassment to delegitimize and discredit the party. More recently, Black Lives Matter activists in Minneapolis were surveilled by the FBI during and leading up to the shutdown of the Mall of America. LA had more mass arrests for street protests than any other city, and felony charges were threatened against protesters for blocking traffic.

What can be said about a government that spends its resources, time, personnel, and institutional power to harass, prosecute, and effectively criminalize those who speak out against police violence, but cannot be bothered to arrest cops who kill Black people? The decisions that are made about which lives can and cannot be disrupted directly correlate to whose lives are valued and whose are perceived to be disposable. When you consider that many of the charges that BLM-LA protesters are facing impact their right to freedom of speech, the injustice of these proceedings become increasingly clear.
LA is a city known for its violence against Black people; this year, like last year, it leads the country in the number of killings. These trials not only reflect that violence, but the racist priorities of government officials and the Mayor. In many other cities across the country, governments have dropped charges and dismissed cases. However, in LA city and county, there is a culture and a will to continue to suppress Black voices that demand police accountability and the dismantling of white supremacy. It’s a repression of the people when the political persecution of activists is prioritized over the prosecution of police who kill with impunity. Yet many of these cases end with acquittals, hung juries and dismissal; in other cases, charges are not filed immediately, but hang over defendants as kind of back-door probation for a year. 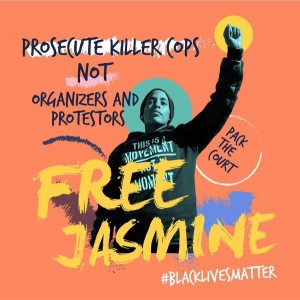 Activists who put their bodies on the line are not only in danger during actions, but also afterward. The cost of trials and convictions on the defendants is not only physical; there are emotional, psychological, and monetary damages as well. We demand that the city and county prosecutors of LA drop the charges against Black Lives Matter organizers and use tax dollars to prosecute killer cops and corrupt city officials. Jasmine Abdullah, the founder of Black Lives Matter Pasadena, a organizer fighting sanctioned police state violence has become a repeated target of the police and prosecutors. The Pasadena police have charged Jasmine with 6 misdemeanor charges of terrorist threats, criminal threats, assault, failure to comply with police officer, trespassing and failure to turn down amplified sound. She says, “Out of all the folks who attended i was the only who received charges. Shortly after, my job, Equality California, suspended me without pay pending criminal investigation. I moved from Pasadena my home due to police threats. I have also been charged with felony lynching from a peace walk BLM Pasadena organized in northwest Pasadena on August 28, 2015.” As C-L goes to press, she was convicted of attempted felony lynching in Pasadena by the Pasadena office of the L.A. County district attorney, and faces a possible 4-year sentence on Tuesday June 7 at the Pasadena courthouse — people are mobilizing for court support and urge leniency. You can donate to her legal defense at crowdrise.com/jasminerichardsfreedomfund. 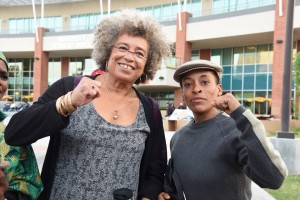 You can help all BLM-LA defendants pay their legal fees by donating at: Crowdrise.com/BLMLA, or come to the benefit on June 1 at UCLA with Macklemore in conversation with activists from BLMLA and White People for Black Lives (see calendar).

If you enjoyed this post, please consider leaving a comment or subscribing to the RSS feed to have future articles delivered to your feed reader.
By Change-Links|2016-06-03T23:11:15-05:00June 3rd, 2016|Anti-Racism/Racism, Black Lives Matter, Fund Drives, Human Rights, Justice/Injustice, Movements|0 Comments