I went to Cuba for the first time, as part of the 50th Venceremos Brigade, for two weeks in July and August, along with over 150 others, the largest solidarity delegation in many years. The visit was eye-opening about the on-going revolutionary process and humanitarian values of their socialist society. It inspired us to oppose the US embargo/blockade against Cuba, and to organize to demand that the US recognize and respect Cuban sovereignty and dignity, stop trying to overthrow its government and punish its people, and return Guantanamo to Cuba.

The overwhelming impression the Cuban people make is about the extent of their caring, and care. They care for each other and for their environment, and they take great care in their processes, economic development and various projects to pay attention to each step and aspect and its impact on people and on nature. Most of the farms, whether state owned, cooperative or private, are organic. Despite the longstanding US animosity and blockade and their limited resources, there is little to no unemployment or houselessness. All medical and dental care is provided free of charge, including in-vitro fertilization and even sex-reassignment surgery.

Cuba is a beautiful, verdant and dynamic island nation, about the size of Florida but with only 11 million people. It is still predominantly rural and agricultural, although there are several large cities, including the capital, Havana with about a million residents. Cubans are guaranteed a basic nutritional diet, free universal lifetime health care, and free education (although those who receive a higher education are expected to do paid community service in their needed professional area for 2-3 years after graduation). 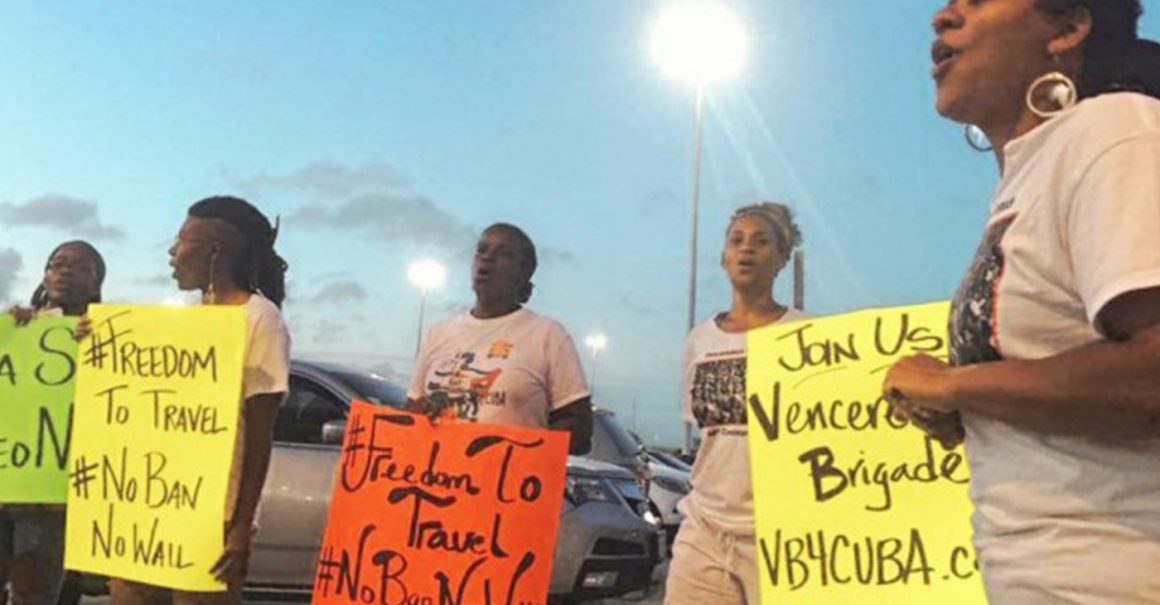 The Cubans see themselves as having engaged in a continuous revolutionary process since 1868, when the first struggle for independence from Spain and the abolition of slavery began, continuing with a second revolutionary war for independence led by Jose Marti, Antonio Maceo and others beginning in 1895, and culminating in the July 26th Movement of Fidel and Raul Castro, Celia Sanchez, Vilma Espin and Ernesto Che Guevara, which triumphed on January 1, 1959. Cubans were celebrating the 60 anniversary of that victory, and acknowledging the 50th anniversary of the Venceremos Brigade (the first international solidarity brigade to Cuba) as we traveled along the island, meeting with ordinary people and with representatives of various civil society organizations, such as labor, women, students, small farmers and others.

Although Donald Trump has reinstated a travel ban, it only affects one of a dozen “licenses” to travel to Cuba for educational, scientific, and other reasons. Trump’s ban prevents US cruise ships from docking in Cuba and has had a severe impact on tourism from the US. Europeans and others, however, continue to visit in large numbers, and you can still fly directly into Cuba from the US on US air carriers like American Airlines and Jet Blue. I urge you to plan a trip there to see for yourself the social and cultural gains of the Cuban revolution, and the nature of Cuban society.

More serious than the travel ban is Trump’s enactment of Title 3 of the Helms-Burton Act (first passed under Bill Clinton). Helms-Burton already blocks Cuban goods from being imported into the US or many needed supplies and parts from the US being exported to Cuba. Trump has put into effect an especially onerous provision, never before imposed by prior presidents, which retroactively declares that properties of Cubans who later left and became US citizens, is US property, and authorizes lawsuits by “gusanos” (right wing ex-Cubans) in US courts against third parties who use or develop such properties in Cuba. Trump has also impacted shipments of oil and other supplies to Cuba through his sanctions and now embargo/blockade against Venezuela. These violations of Cuban (and Venezuelan) sovereignty and dignity are artifacts of colonialism and Cold-War relics that must be opposed and overturned here in the US. The Cubans (and Venezuelans) have made it clear that they will persevere with their revolutions, and defend their countries and their new way of life, no matter what the US throws at them.

Let me describe three interactions I had that make clear why Trump and US imperialism hate and fear Cuba so much.

Race and Racism in Cuba

At the international solidarity camp outside Havana, we were visited by three Afro-Cubans, active in cultural, political and academic affairs. They spoke about race and racism in Cuba, and made it clear that — as in many other respects — they do not claim to be a paradise or perfect, but a society waging a successful but ongoing struggle for liberation. They identified racial prejudice (personal bias and animosity), racial discrimination (occasional or individual misuse of power to apply such prejudices in practice) and institutional racism (racialized economic and political power structures). They feel that they have outlawed and overcome the last of those,  but continue to grapple with the first two. There is no more segregation or color line as existed in Cuba into the 1950s on their legacy of racial chattel slavery, which lasted longer even than in the US, but there are still personal prejudices, and they can sting. I asked the historian after the presentation about the differences, if any, between incarceration in Cuba and the US, where in this country, incarceration is massive, highly racialized and used to legalize enslavement of Black and Brown prisoners.

He said that Cuba was completely different. Incarceration is a much smaller aspect of their society and today, the majority of the prisoners would be considered ‘white’ in US terms, because that’s who is committing frauds and other economic crimes. In addition, prisoners in Cuba are entitled to education, and when they work, receive the same pay as non-prisoners doing the same work!

Trade Unions and Labor in Cuba

The next night, I went to the presentation by a representative of the Cuban trade union federation (which has existed since before the 1959 victory, and takes no funding from the state). I asked him if the unions had played a role in getting incarcerated workers equal pay for their work. He said that in the case of “inserted workers” — prisoners get work release during the day to work alongside other workers in various enterprises — there was some resistance from other workers to their presence, and the unions saw it as their role to overcome this contradiction, and work with their members to embrace the idea that prisoners needed to be resocialized and reintegrated into society through gainful employment so that they could contribute to society and be more constructive once they were released.

The third example — there are many more I could give — was the case of Las Terrazas, a community in what was described as a bio-preserve, a reforested area that was a site of eco-tourism. After the 1959 victory, the area, which had been virtually denuded of its hardwood trees by centuries of exploitation by Spain and the US, was chosen for development of a nature reserve. The residents, making a hard-scrabble living mainly by making charcoal out of the remaining or fallen trees, were invited to join in the project and to come live in one of 11 communities that were simultaneously built in the area along with the reforestation project. Rather than a pristine wilderness or forest primeval, the Cubans planted a mixture of the nearly extinct indigenous hardwoods along with fruit trees and other vegetation, careful and respectful development of a resort area along the cascading river, and a series of pleasant, unobtrusive and communal housing developments in which people could live in greater harmony with their surroundings. The motto of the national ecotourism agency is “We preserve nature so that we can share it.” This attitude of caring and sharing exemplifies what Cuban society as a whole and its people individually are striving to realize day to day, despite the privations that US imperialism and globalized capitalism subjects them to.  They deserve our respect, our loving solidarity and our committed struggle to overturn and reverse the ceaseless US attacks on them and their ongoing revolution. 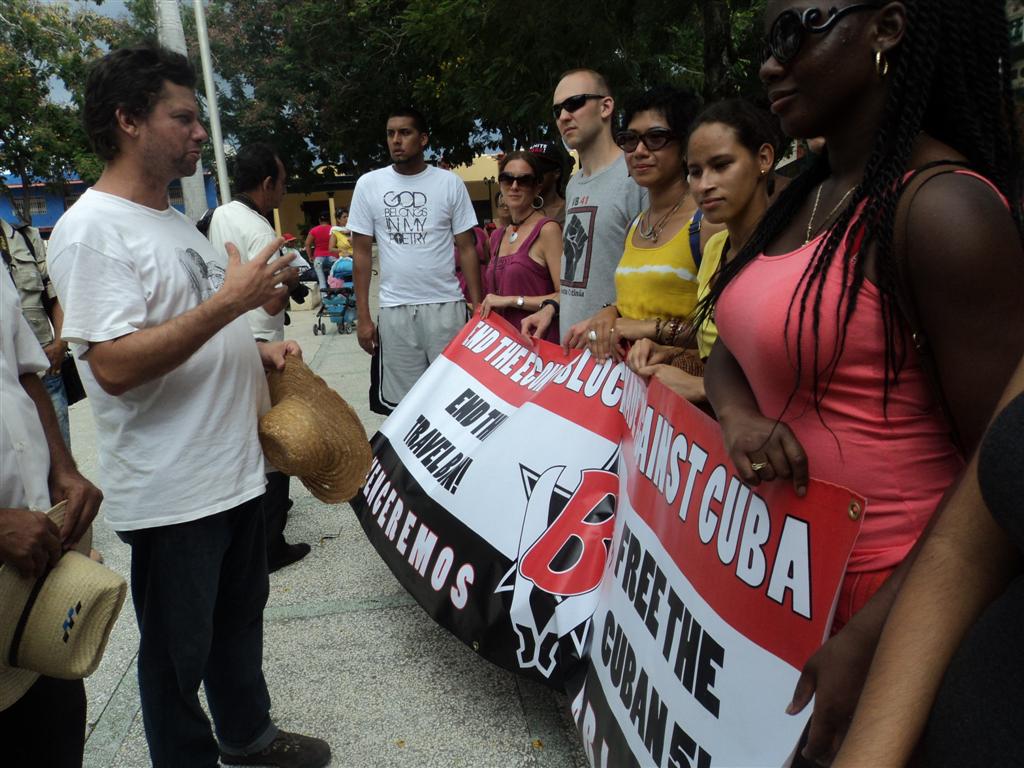 About a dozen of us from Los Angeles went to Cuba on this 50th Venceremos Brigade and we are planning to build the Brigade regionally and step up solidarity work here in Los Angeles. If you are interested in getting involved, or want to learn more about how you can travel to Cuba, please get in touch. Call me at 323-636-7388 or email antiracistaction_la@yahoo.com. A number of us and others will be putting on one or more panels about Cuba and resisting the US blockade at the Left Coast Forum at Occidental College the weekend of Oct. 11-13. See http://www.leftcoastforum.com for more information. On October 5, the LA members of the 50th Venceremos Brigade will be holding a commemoration of 50 years of the Brigade and a report back on our recent visit, along with a discussion of how to build struggle against the blockade and solidarity with Cuba on Saturday, Oct. 5, from 3:00 to 5:30 at Mercado La Paloma, 3655 S. Grand Ave., Los Angeles 90007, with an opportunity to socialize, eat and talk informally afterward. That’s on facebook here (please come, and share): httpss://www.facebook.com/events/492961484831119/