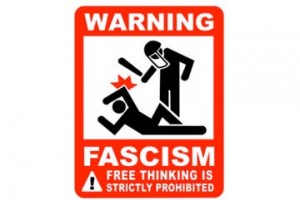 The list contines to grow.  The National Defense Authorization Act (NDAA).  The essentially unprovoked police attacks on protesters, bystanders and journalists at Occupy protests around the nation.  The continuing murder of (mostly young and black) men by police departments around the nation with few or no legal repercussions to the murderers.  The growing surveillance state and the denial of basic freedoms via emergency legislation in cities facing political protest usually from the left.  The permanence of that legislation even after the protests have ended.  The continuing pursuit of “material support” charges against antiwar and solidarity activists involved in work against US and Israeli policies.  The infant US police state is no longer learning to crawl; it has learned to walk and will soon be stomping its boots in a neighborhood near you.

Anyone following the Occupy protests since last fall is well aware of the response of the authorities.  It can best be characterized as brutal and with little regard for civil liberties.  This is the case even though many of the protesters were/are white-skinned and from middle class backgrounds.  It is fair to say that this demographic fact gave the protesters more press coverage while it also prevented the police from carrying out even more brutal attacks.  Young black and Latino men going about their daily lives generally have more to fear from the police than the Occupy protesters.  That being said, it is useful to take a look at some recent comments regarding Occupy Oakland, the police attacks on the group and the response of officials and others.

In short, the response to the Oakland protesters commitment to defend themselves against police attacks has caused some potential rifts in the Occupy movement.  Those rifts have been covered well on this site and across the media universe.  It is not my intent to continue those discussions here.  Instead, I would like to paste a quote from a professor at John Jay College of Criminal Justice that goes a long way towards explaining law enforcement’s perception of the Occupy movements tactics,  This quote first appeared in a San Francisco Chronicle article on February 11, 2012 discussing the police tactic of kettling.  For those unfamiliar with the tactic, it essentially involves surrounding a group of protesters in an area where they have no escape, then arresting them all.  Sometimes the arrests are preceded by a series of gas attacks and various physical attacks by the police.

The professor quoted is named Maria Haberfeld.  Ms. Haberfeld’s career path is not one that suggests a strong belief that police should protect protesters’ civil rights and liberties. She was born in Poland and immigrated to Israel as a teenager. According to her profile on the John Jay website, Haberfeld served in a special counter-terrorist unit of the IDF that was created to prevent terrorist attacks in Israel.   After that, she served in the Israel National Police and then the U.S. Drug Enforcement Administration.  None of these agencies are known for their commitment to civil liberties.  Indeed, most of their work is undertaken in what can be best termed as a murky legal and moral environment.  When asked to comment on the recent police tactics against Occupy protesters intent on squatting an abandoned building in Oakland–tactics that provoked a melee between well-armed police and unarmed protesters–Haberfeld was quoted when describing the protesters’ intent: “It almost falls into the description of a terrorist threat.” Suffice it to say that, with a perception of protesters as terrorists, the police would certainly feel free to prevent such a protest from succeeding.  In fact, there are probably some in law enforcement that feel they should be able to use live ammunition in such cases.

Recently, a young African-American man was shot and killed by the police in the bathroom of his apartment in the Bronx.  The young man, Ramarley Graham, was eighteen years old.  The police involved in the incident explained their actions by claiming Graham had a gun and that he ran from the police because he was selling marijuana.  The NYPD’s own investigators did not find a gun and video footage of Graham walking into his apartment building show an 18 year-old kid walking calmly up the sidewalk and to the building’s entrance.  Then, a group of police with guns drawn are shown kicking down the door and entering the building.  Within minutes, Graham was killed while his grandmother was in another room in the same apartment.  Graham’s murder was the third fatal shooting of a black man in New York City in a week.  A week!  New York is not alone in this epidemic of murder.  Police shot over forty people in Chicago in 2011, with at least 16 fatalities among the shooting victims.  This evidence, while anecdotal, is representative of the role police play in the police state.  The fact that most of the killings are considered justifiable lends further evidence to the argument that the police state is growing.  If there was not a campaign directed from the highest political offices in Manhattan against marijuana smokers and providers in New York City, the likelihood of Graham’s death diminishes greatly.  As it has for decades, the “war on drugs” continues to provide authorities with an excuse to surveil, arrest, imprison and sometimes kill poor and working-class residents of the United States.

Chicago is also the site of a number of police state exercises.  Foremost among them is the continuing investigation of antiwar and solidarity activists by the US Department of Justice.  For those who might not remember, on September 24, 2010 the FBI raided several houses and a couple offices in Minneapolis/St. Paul, Chicago and North Carolina under the guise of looking for proof that the people living in those houses were involved with organizations that “lent material support to terrorists.”

On February 1, 2012, Northern Illinois Assistant U.S. Attorney Barry Jonas told the press that the “investigation is continuing” into the case.  The assignment of Jonas to the case is telling, primarily because of his earlier role in the prosecution of the Holy Land Foundation defendants.  This prosecution, which focused on five officials of what was once the largest Muslim charity in the U.S. The foundation’s mission was to provide humanitarian aid to the people of Palestine and other countries. In 2001 its offices were raided and five people associated with the charity were indicted in 2004. The first trial ended with a hung jury. The second trial ended with convictions and the defendants were sentenced up to 65 years in prison.  One of the individuals who is being investigated, Jess Sundin, told the press:  “That Barry Jonas is now involved in our case is an ominous development.  He is famous for one of the most appalling attacks on civil and democratic rights in the past decade – the prosecution of the Holy Land Five.”

According to Mick Kelly of FightBack News, the Holy Land Five prosecution “included secret witnesses – the defense never got to find out who the witnesses were – the use of hearsay evidence and the introduction of evidence that had nothing to do with the defendants in the case, such as showing a video from Palestine of protesters burning an American flag, as a means to prejudice the jury.”  One assumes that this is permissible in the post-911 PATRIOT Act world we now live in.  The fear of terrorism trumps all and the State is not afraid to stoke that fear in order to maintain its power.

The other instance of the police state assault on civil rights and liberties can also be found in Chicago.  This May, the city is hosting the NATO/G8 summit meetings.  This meeting of the capitalist rulers of the world and their biggest armed force will make Chicago the site of what will hopefully be some of the largest protests against the imperial intentions of Washington since earlier in this century.  The stated intention of protest organizers to protest is being met with a concerted attack on the protesters and their motives from the establishment media and politicians, while the city of Chicago is changing its laws to prevent the protests from attracting the thousands they can potentially draw.  Like Charlotte, NC and Tampa, FL.–the sites of the 2012 major US party political conventions–the city of Chicago has put a series of ordinances into place that will make it easier for the police and other law enforcement agencies to attack the protests and limit their effectiveness.  Furthermore, these ordinances will not disappear after the so-called “state of emergency” brought on by the events in these cities is over.  Instead, they will become permanent, essentially restricting the right to protest forever.

Having politically come of age in the Nixon era, I naturally compare the current situation with  the assault on civil rights and liberties in the United States that occurred then.  An incomplete list from that time includes the indictment of dozens of organizers on conspiracy (most notably the Chicago 8, Panther 21, and Harrisburg 7) and other charges; the brutal attacks on protesters in demonstrations large and small; the assassinations of Black Panthers, Latinos and American Indian Movement members; the murders by law enforcement at People’s Park, Kent and Jackson State, Attica and in African-American and Latino urban areas across the nation; the prosecution of Angela Davis, Bobby Seale and Ericka Huggins; etc.  You get the point.  The repression was clear and it was everywhere.  Yet, it was not always successful.  Why?  Primarily because there was a mass movement that fought it.  The highlights of this movement were it successes: the acquittals of Angela Davis, Bobby and Ericka and the Panther 21 and the failure of the prosecution in the case of the Harrisburg 7.  The failures of the moment against repression were unfortunately too frequent, but those successes remain important, both for the very fact of their success and as examples of the potential of a mass movement against repression.  Repression can be fought and defeated.  The place to begin lies in front of us.

Ron Jacobs is the author of The Way the Wind Blew: a History of the Weather Underground and Short Order Frame Up. Jacobs’ essay on Big Bill Broonzy is featured in CounterPunch’s collection on music, art and sex, Serpents in the Garden. His collection of essays and other musings titled Tripping Through the American Night is now available and his new novel is The Co-Conspirator’s Tale. He is a contributor to Hopeless: Barack Obama and the Politics of Illusion, forthcoming from AK Press.  He can be reached at: ronj1955@gmail.com.

If you enjoyed this post, please consider leaving a comment or subscribing to the RSS feed to have future articles delivered to your feed reader.
By John Johnson|2012-03-03T01:04:13-05:00March 1st, 2012|Commentary, Editorial, Featured, Wall Street|1 Comment